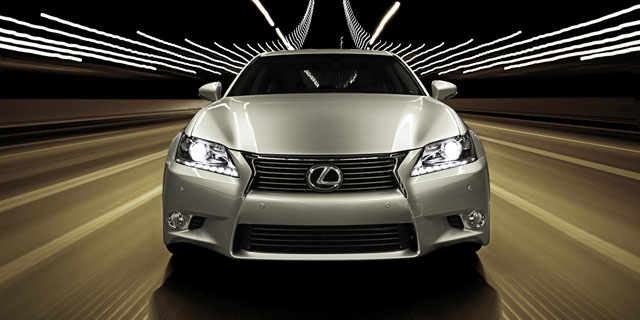 Automotive News journalist Hans Greimel has written an in-depth article about the genesis of the new Lexus Spindle Grille:

The epiphany came while GS lead designer Katsuhiko Inatomi was playing with clay models of that car at the company’s studio in Toyota City. On a whim, he tweaked the air intake to connect the lower and upper grilles in a boxlike frame.

Humphries says the spindle brings the flexibility to span a Lexus lineup running from sporty coupes to sedans and SUVs. “For example, we can create a more elegant grille if the break point” between the upper and lower portions of the grille, he says, “is lowered, or more aggressive if raised.”

The grille’s design language will change with the times, he says. “The proportions may become wider or narrower, it may be rounded or squared,” he says. “But the fundamental bi-conic shape will remain apparent.”

Really enjoyed this article, and would quote the entire thing if I could — here’s another passage about the new design process at Lexus:

The fact that Lexus could even risk floating the brash concept grille underscores an important change in attitude within the brand’s design-review process. 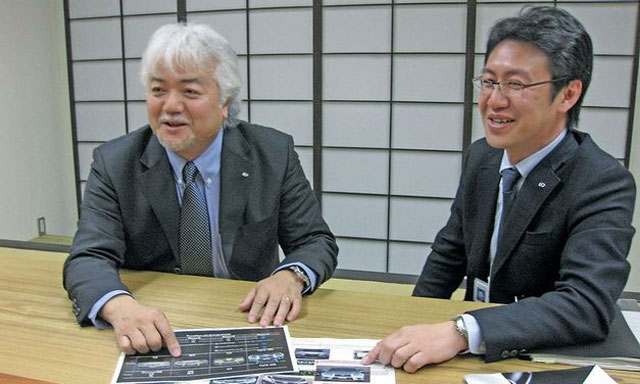 Today’s sign-off committee consists of just 10 people — about a third of what it was just a couple of years ago. The slim-down aims to combat committee-think by seating a panel of styling experts, not the top-level executives who ruled previously.

Tokuo Fukuichi, who leads global design at both Lexus and Toyota and is the force behind the changing mentality, described the shortcomings of the old system bluntly after taking the reins last year.

“It is unlikely you will create a failure,” he said. “But it is also unlikely to deliver an epoch-making design.”

Where the LFA set the tone and the CT added an entirely new segment, it’s the fourth-generation GS that has truly introduced the future of Lexus — as we’ve seen with the sixth-generation ES, there will be a shared design language that goes much further than just the spindle grille.

“…it’s good there are people that don’t like our design – because good design will split opinion, and it will make you love something instead of just being OK with it.”

Make no mistake — when Lexus chose to reinvent itself in both design and performance, there was the very real risk of alienating existing customers without attracting new buyers. To me, taking such a large gamble shows how deep the changes at Lexus have gone — makes me wonder what other surprises are coming down the pipeline.

Read the full article at Automotive News (Subscription, but should work)

Read the article text at Pastebin (Just in case)

Although this will probably be an unpopular opinion, as a Lexus fan, I think the new spindle grille looks...okay? It doesn't look GOOD. And we've all seen the comparisons on the web between it and the Predator. I know Lexus made this move to have a definitive grille that marks their cars, but...I honestly thought they could've done better.

I don't when was this spindle grill design started, but I did myself for my Toyota corolla front bumper style since one year ago.
I keep looking every day to see what the next IS looks like.I can't wait!

I don't have a problem with the spindle design, but I'm not sure I like the idea of all models getting it. They claim they can tweak the spindle to make it look more or less sporty, but I have yet to see it look elegant in that sort of tastefully understated Lexus kind of way.
I don't think it's all that new (and I don't see it on the LFA at all). Look at the '04-'06 LS 430 and you can see it when looking at the top and bottom grille together. The same with the LX 570. If you look at the back of the current RX, the spindle shape is right there in the license plate surround. The CT and new GS have made it work very well. What is interesting is just how much better it looks in person; photos just don't do it justice. I was originally very critical of it, but now I own that face. I'm excited to see how it's going to evolve. (BTW - I used to post as enthusiast, but now I'm signed up as enthusiast88)
Why Toyota doesn't learn from its own failure.  The biggest problem of Toyota's design when it want to be distinctive is that they always make it ugly.  How? They over exaggerate an element to become ugly with the shape that is too unusual and leave the rest of the car bland by keeping it under styled.Look at the latest Corolla for an example.  I remember they told that they were going to make it distinctive because of the reputation of dullness.  Toyota sent engineers and designers to Europe for several months and come up with over exaggerated headlights.  The shapes of Toyota's taillights are usually symmetry to the headlights, until recently, which make the taillights of the Corolla comparatively ugly.  While the side profiles of cars in the market are more edgy than the Corolla. They have a monstrous wind duck in the latest Avalon while the rest of the car is blemish.  They have strange grill in the first Venza.  This time, they've come up with this "spindle grille," and said “…it’s good there are people that don’t like our design – because good design will split opinion, and it will make you love something instead of just being OK with it.”  Huh????????  That's why they failed.  Look at Hyundai Sonata, Elantra, Tuscon and so on.  This makes clear examples.  They can make cars distinctive by making it beautiful.  Recent Mercedes design also has its own characteristic and it is good.Camry is still in good shape but this spindle grill is intolerable.  The 2013 Lexus ES is almost "PERFECT" but the grille turns everything down.  I can notice that the latest ES design is merging to the LF-Xh http://www.lexus.eu/about/concept-cars/view-cars/lf-x/index.aspx which is superbly beautiful.  They can just apply this grill and front-end to make their own identity.  As a dedicated Lexus fan waiting for the next perfect RX, I'm really upset by this "spindle grill" -_________-"  Please make it as good as in lf-lc or lf-gh.  The best one is the lf-xh.

The Sonata, Tucson etc have aged absolutely terrible.. The Tucson looks like a ball of goo.. Look at he Lexus IS250/350 almost 7yrs old and with just subtle changes it looks extremley fresh and very nice and desirable.. Hyundais/Kia's look good or the first 2 weeks and then it all goes downwards from there I don't think we should be comparing Lexus to Hyundais anyway, completley different cars, I really don't need to explain which is better..
I agree that Lexus has good design for all of their models, except the GSs, until they invented this spindle grille -__________-"

It seems as if a new styling theme is always derived from the GS, which means all Lexus vehicles will use the spindle grille until the next GS design is approved in 2016 and likely presented in late 2018 as a 2020 model(3GS was made in 2002, this one in 2009).
I'm loving everything about the new es and gs except for the ugly grill. The car would look so much nicer with a square grill similar to audi. Interior is perfect, tail lamp is perfect, but my god! The grill is ugly! I want to know what the process is when approving these designs. Those who gave the green light on this spindle grill should be slapped silly. It's an eye sore
Love the new grill myself, noticed comments like refreshing, good design, excited to see how it's going to evolve, elegant in that sort of tastefully understated Lexus kind of way. O, Wait, Oops, that fabulous ultra stylish newly designed innovative grill of Lexus is starting to look familiar.......OMG that grill is out in my garage, it's been there for years, on my 1961 Plymouth Belvedere wagon.  Maybe the ghost of Virgil Exner payed a late night visit to Lexus's lead designer and gave him his blessings, or is it being counterfeited?     I think it is despicable that a manufacturer would steel someone’s grill design, claim it as there own and use it across it's entire line of cars and have their lead designer claim he had a epiphany on the design. Just Saying!
I have to say it. I love the old design better. The 2013 design is too aggressive looking. To be honest I dont like it when cars look aggressive. I love the interior but I think Lexus made the 2013 model look too aggressive. The 2012 LS is just a beautiful masterpiece!
Will there be a ceremony when the ugliest grill in the car industry get passed from Mazda to Lexus?  Mazda could pass their old smiley grill off at $20K and 0% APR.  Can't believe people are paying $60K for this mess.
I looked a the Lexus cars in the show floor before I comment on this board; and I think the spindle grill looks pretty ugly! Even on the LS 460; the car that I have with the normal grill; on the LS it looks like crap! The pictures with the 460F look a little better but I going to try to see if Lexus will change it back to the original looking front grill or I going to Audi A8 or BMW 7 series.
Those new grills look ugly to me. I will be sticking with my 2011 longer than planned!
What an ugly grill. What was Lexus thinking?
The spindle griddle is a disaster. Lexus is still struggling to match its second generation GS. Its like after that 2nd G master piece, they started fumbling. The third generation GS has never looked better than the one it replaced. Now you have the 4th looking all radical inside out. The 2008-2012 LS are far more beautiful than its successor unfortunately. Fire your designers. They simply have no clue. They are copying and fusing Mercedes, BMW and Audi designs with intent on capturing all three of these instead of maintaining its own superb designs. Why should anyone trust Lexus if they are going to continue altering stuff radically instead of simply improving on their successes and masterpieces. Keep the smooth looks and leave the contours for Mercedes!!!!!
I understand the reasoning behind wanting to give the Lexus a distinctive look, but believe this design is not right for the Brand. In much the same way the new Mercedes grille which features a large Mercedes star in the middle of the grille is also a step in the wrong direction. I am not a designer but by all the comments that have now arisen i do hope somebody somewhere will take another look, the Lexus is a superlative product and my opinion is that it simply does not need this overly ornate grille to be noticed! Lexus cars are in a superior class of their own anyway. It is the Sport models that are the worst affected by this grille design. Tone it down please - make it more acceptable to your clientile.

Why don't they just leave this grill to the Fsport line and give the rest of the lineup a more handsome classier grill?

Looks more like a crushed beer can than a spindle.....
The design commitment to spindle grille design is having the same effect on Lexus LS sales as did the decision to attack Pearl Harbor had on Japan.