Go to article
I

Glad to know I wasn’t the only skeptic.

Gecko said:
No Supra parts for Lexus - that was part of their deal with BMW.
Click to expand...

That's a good thing. BMW did Lexus a massive favor. Imagine how bad it would be for a luxury brand to use parts from another competitor.


bananaslug said:
Unless it’s going to give me at least 380hp I’d rather it just stay a concept......
Click to expand...

That sounds like a certain car that has almost that exact same horsepower number (at the wheels though) in Toyota's lineup. ;^)
I

Maybe it will be the Lexus US to compete with 2 grand coupe, the A3 and the CLA haha.

Gecko said:
No Supra parts for Lexus - that was part of their deal with BMW.
Click to expand...

is there a source for this? I've never heard this before, though it makes sense.
L

A Lexus version of the Toyota/Subaru GR86/BR-Z sports-car may be in the works....the UC. I'm sure this will interest some of you enthusiasts. 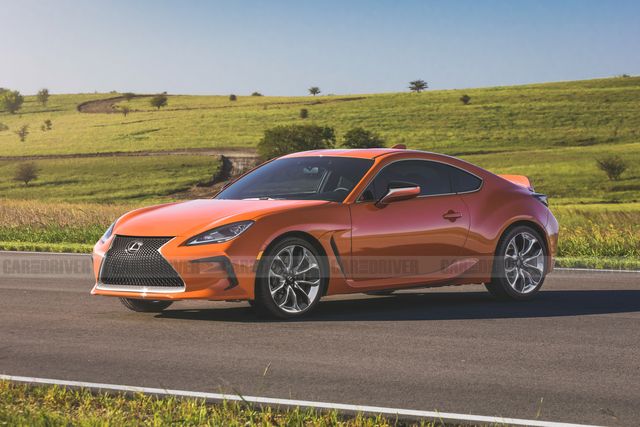 BEN SUMMERELL-YOUDE/FOX SYNDICATIONCAR AND DRIVER
Lexus might have a hybrid version of the recently revealed Toyota GR86 on the way, if rumors from the Japanese website Spyder7 are any indication. If this model comes to fruition, the new entry-level luxury rear-wheel-drive sports car would join the RC, RC F, and LC coupes in the Japanese automaker's lineup. It's said to be making its debut by the end of the year, and we'd love to see something like this in the States since many other small luxury coupes have disappeared.
It will reportedly be called the UC for "Urban Coupe," using the same naturally aspirated 2.4-liter flat-four as the new Subaru BRZ and Toyota GR86. In those applications, the four-cylinder engine produces 228 horsepower and 184 pound-feet of torque. A six-speed manual gearbox is standard, and a six-speed automatic is optional. We think it likely the Lexus would only be available with the automatic. The Lexus is expected to use a hybrid drivetrain with the flat-four in conjunction with an electric motor and battery pack, which should increase power over the BRZ and GR86.
This content is imported from Twitter. You may be able to find the same content in another format, or you may be able to find more information, at their web site.

An alleged spy photo (above) of the car's front end shows a Lexus spindle grille and the same overall shape of the Toyobaru siblings. The UC could be slightly stretched to accommodate the hybrid battery pack. The Subaru BRZ measures 167.9 inches in length. If the photo posted on Twitter does indeed show a prototype for the UC, we can also expect the production car to have other Lexus-specific trim pieces such as more angular lighting elements and larger wheels. The GR86 offers 18-inch wheels.
THE CARS THAT EXIST 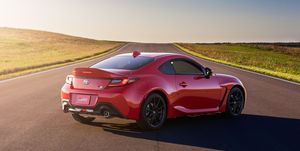 2022 Toyota GR 86 Revealed for U.S. with 228 HP
The UC's interior should also be a step above the BRZ and GR86. The interiors of those two feature 8.0-inch touchscreens and a 7.0-inch digital gauge cluster. The 2022 Lexus NX crossover debuted a new infotainment system for the luxury automaker with a standard 9.8-inch touchscreen and an available 14.0-inch unit. We don't expect the small sports car to get a screen that large, but it could be larger than the other two sports cars' screens.
It's unclear if the Lexus UC will be sold in North America, as entry-level sports cars including the Mercedes-Benz SLC-class have disappeared from luxury automakers' lineups in our market. However, a Lexus spokesperson told Car and Driver that there are "some exciting things coming to Lexus." We sure hope that includes this new Lexus sports car. Look for more information in the coming months.
This content is imported from {embed-name}. You may be able to find the same content in another format, or you may be able to find more information, at their web site.
U

It probably doesn't make sense in many ways... but this would be the car that I want.
My only rationale my small brain can fathom is that they are creating this to build brand loyalty towards the future, targeting a new younger demographic which Toyota takes up.

The IS is really trying, especially with the IS500... but it's still a four-door sedan.
The RC exists, but everyone on these forums know it's a chonker. (Plus you have to get the RC F or else)
The LC exists, but its price range is in another league.

For someone who wants just a bit off-track on-road sportiness, decent comfort and NVH, a lighter feel (in comparison to the current Lexus lineup), and a hybrid powertrain, I don't think there is a car like that on the market.

(This is assuming they take out the Subaru engine since the only existing Hybrid from Subaru is the Crosstrek afaik and if that powertrain was used, this would be horrible. I imagine it with the LC500h powertrain, paired to lower-displacement-V6 and a smaller battery, hopefully making just under 300hp. Though saying this convinces me the UC is truly a rumor...)

Naturally it's compared to the 86/BRZ, but I feel that people wanting the UC to be a better 86/BRZ is asking for it from the wrong brand. (Wouldn't that just be a Cayman? Don't think Lexus is going to try compete there...)
I do hope they put a bit more LC-inspired styling into the UC to differentiate more, though.

Not a baby LC

My view that Lexus will have 4 coupes
2 GTs aka LC and RC
2 sport / performance maybe the larger will be on the next generation Supra and the smaller on the 86!
S

If there is a new UC model, and if it is based on the Toyota GT 86 and Subaru BRZ, they will not take out the Subaru engine. What makes the 86/BRZ the car that it is and what makes it special is the fact that the car was designed around the Subaru flat-4 engine. Another flat engine may fit but an upright inline-4 or V6 or V8 won't. Individual enthusiasts may shoehorn in a V6 or V8, but doing so ruins the carefully-designed balance of the vehicle, and it would no longer be a Toyota GT 86 or Subaru BRZ.

If there is a new UC model as rumoured, it will not be an (expensive) baby LC.

I do look forward to the UC if Lexus does decide to make it. I don't think the UC will be a baby LC (the LC isn't a baby LFA) or a baby RC for that matter. It will be a unique affordable Lexus coupe similar to the 86/FRS/BRZ but with luxury touches. Lexus should expand it's coupe lineup.