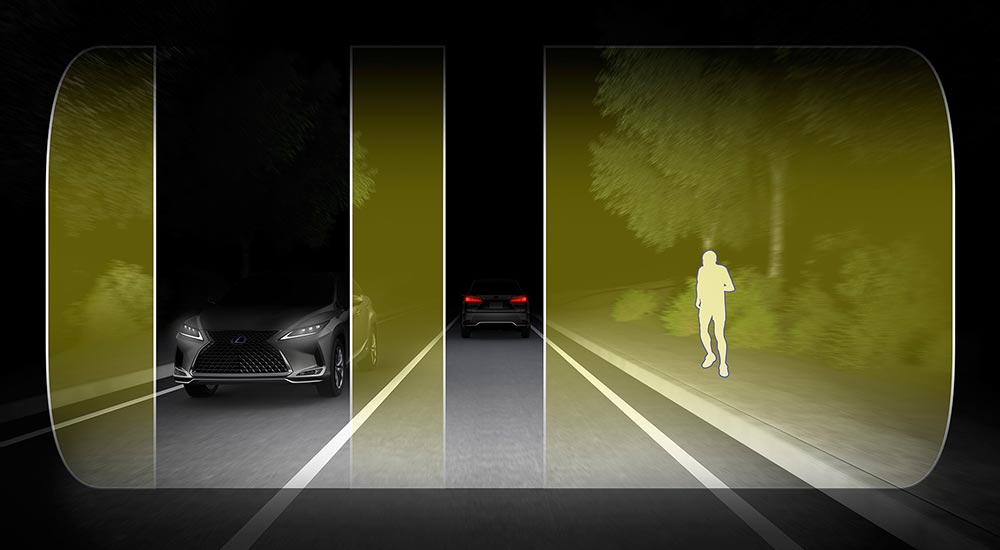 The Lexus Global, European and even Australian news releases for the 2020 RX refresh highlight an important innovation: the introduction of the world-first BladeScan Type Adaptive High-beam System (AHS).

Here’s how it works:

In a world first, Lexus has advanced its pioneering LED Adaptive High-beam System (AHS) with BladeScan technology that enhances overall safety at night. LED-sourced light shines onto two blade mirrors spinning at high speed, and the light is transferred to a lens to illuminate the road ahead. The light’s distribution is precisely controlled by synchronising the spinning of the blade mirrors and the switching on and off of the headlights.

As a result, RX drivers can view hard-to-see areas such as road shoulders and recognise pedestrians and road signs much earlier – without impeding the driver’s overall visibility and without dazzling drivers travelling in the opposite direction. Pedestrian recognition at night has been improved to 56 meters (184 feet) in front of the Lexus using BladeScan technology, compared to 32 meters (105 feet) with the previous system (Array-type AHS).

The concept is better illustrated by the above image and this all-too-brief video:

But why have the United States and Canada been excluded from this new technology?

Blame the U.S. Federal Motor Vehicle Safety Standard No. 108, a 1967 law that regulates automotive headlights. The key issue that affects the BladeScan AHS is that only a single low beam and a single high beam setting are allowed. There can be no intermediate settings; simultaneous use of low and high beams is forbidden; and the candlepower limits for low-beam headlights are insufficient.

FMVSS-108 has been amended and updated before, but the process moves at a glacial pace and involves countless studies, analyses, official reviews, public hearings and comment periods, plus input from interested stakeholders.

Lexus parent company Toyota led the charge back in 2013 to allow for fully adaptive headlights in the United States, with Audi and BMW following suit in 2016 and 2017, respectively. Accounts from October 2018 and April 2019 remind us that the issue remains unresolved.

But why is Canada affected by this U.S. bureaucracy despite its more accomodating headlight laws? A guess would be that Japan’s Kyushu plant will build Lexus RXs with the BladeScan headlights, and the Cambridge, Ontario factory in Canada will supply North America.

How&#039;s this different than two stage matrix adaptation on LS?
Never understood quite good why the adaptive headlights are not available in the U.S. whereas we get this item in EU. Is it regulation? And what is the reason behind the regulation?
I get that U.S. Federal Motor Vehicle Safety Standard No. 108 is terribly outdated and needs fixed. However Lexus can and has had good adaptive headlights that make it safer to drive at night. Both of my LSs and my GS with Luxury package had AFS and it was pretty good. I traded in my Luxury GS for an F Sport GS and was surprised that the F Sport did not have AFS and it was quite noticeable at night where I live. When I got the RC 350 F Sport I special ordered it with the triple beam LED headlights hoping they would be better but THEY ARE TERRIBLE. At night we only drive my BMW because it has AFS and turning lights. I like Lexus and BMW, but for safe night driving Lexus needs to do so much better.
Driving the NX 450h+