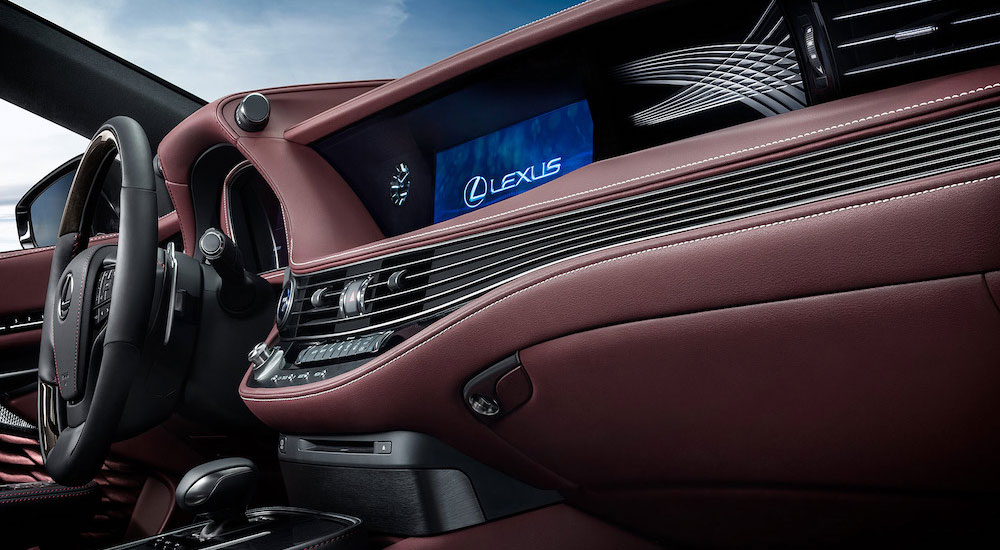 Lost in the excitement of last week’s ES debut, the Lexus LS was named to the 2018 WardsAuto Ten Best Interiors list:

Looking to gain some ground in the languishing fullsize luxury sedan segment, Lexus dresses the new LS in spectacular color combinations (including crimson in the F-Sport variant) and taps the creativity of its assembly craftsmen for hand-pleated door trim and cut-crystal trim that looks like Waterford’s finest. These two elements, alone, would have appeared only on a concept vehicle not long ago.

​WardsAuto editors recognize the LS for its “top-shelf stuff from headliner to floor,” knurled knobs, huge central screen and reconfigurable gauges and deem it “worth every penny,” even pushing $90,000.

This is the fourth time a Lexus has made the WardsAuto list, and the second straight year — the LC was honored as a 2017 selection. This year’s competition saw 40 nominated interiors that were all-new or significantly improved from the prior year.

View the original article post
Really nice win for the LS! I'll be curious to see if the V35A-FTS makes the best engines list...
Does anyone know if the LS, ES and UX steering wheel design will replace the current RX, LX, GS, GX, LC type of steering wheel?

Airplane
Does anyone know if the LS, ES and UX steering wheel design will replace the current RX, LX, GS, GX, LC type of steering wheel?

I would assume LC's will go to sportier cars like coupes, like LS's will go everywhere else... they are very similar, difference is in the bottom part only. (of course other than materials, etc, which will be lower end in UX and ES)
Just goes to show how dedicated how Lexus is to design. And how little some Lexus "enthusiasts" can be when not willing to see the bigger picture.

On CL, people complaining about 5LS rear seat space and lack of Apple Car play. Oh boy..
Extremely well deserved. At any price that interior is damn near as good as it gets. It is stunning.
I personally like both the LS and LC steering wheels. It would have been nicer if we were to be given options though. The normal cars having the beautiful LS steering wheel and the F-Sports having the LC steering wheel. The F models can end up having carbon inserts, or some sort of beefy, or flat bottomed version of the LC steering wheel. I think that was just a missed opportunity by Lexus.

zeusus
Just goes to show how dedicated how Lexus is to design. And how little some Lexus "enthusiasts" can be when not willing to see the bigger picture.

In fairness to them, you don't necessarily understand the 5LS until you've carved a few corners with the massage seats on and the Mark Levinson bumping.

there are small differences, LC is more interesting wheel, but there are also differences between LS and ES wheels too, despite generally the same look.

I think they look sporty enough for F-Sport, flat bottoms are cool but Corolla also had flat bottom leather steering wheel.
I couldn't think of any other car that could win this award. I mean, the 5LS interior makes every other luxury car look embarrassing. It is easily the quality of a car over twice as expensive.