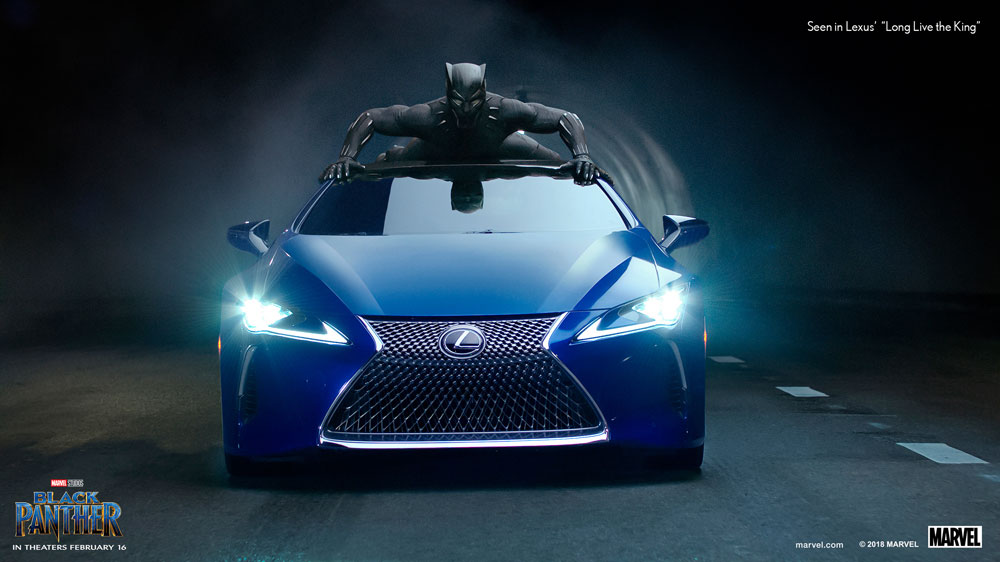 Lexus USA has released their Super Bowl commercial well in advance of the February 4th event, and as promised, it features both the Black Panther and the new LS 500:

Pretty cool to see The Black Panther hopping out of an LS — the press release has all the big details:

“Long Live the King,” directed by Samuel Bayer, incorporates actual footage from the film—notably, of Letitia Wright as T’Challa’s sister, Shuri—and features many of the film’s actors, including the Dora Milaje team of Wakandan special forces: Janeshia Adams-Ginyard, Marija Abney and Zola Williams. The ad was shot using only original costumes and gear from the film, including the Black Panther/King T’Challa outfits, Dora Milaje battle suits and vibranium canisters. Even the film’s fight choreographer, Jonathan (JoJo) Eusebio, was engaged to stage the spot’s fight scene. It features VFX work by Luma, the studio who created Black Panther’s suit FX for the film. The ad was shot in downtown L.A. at night using a custom lighting unit.

Love it! I'm going to that movie! (even though I'm over 60) LOL!
I love the commercials and will definitely see the movie...long live the King and Lexus!
Reviews and buzz have been off the charts so far.. very good move by Lexus!

The premiere for Marvel’s much-anticipated movie “Black Panther” was a hot ticket in Hollywood on Jan. 29. Moviegoers were told to dress in regal attire, and many attendees arrived wearing eye-catching African-inspired fashion.

Still, all eyes were on Chadwick Boseman, who plays the title role, as he pulled up to the premiere in a stylish Lexus LS 500 F Sport.

“Watching him pull up in the Lexus, and the Dora Milaje (Black Panther’s guards) escorting him it…it was really, really great,” said Aaron Walton, co-founder of Walton Isaacson, the agency handling multicultural advertising for Lexus.

The partnership between Lexus and Marvel didn’t stop at the premiere. The luxury car company scored a production placement deal in the actual film, with the Lexus LC 500 (starts at $92,000) appearing as one of the superhero’s tools to fight off enemies. In the film, the exterior of the car is made from bulletproof Wakandan Vibranium, and the side mirrors are decorated with panther claws.

In addition to the movie, Lexus has also released a 60-second extended version of its 30-second Super Bowl spot, which features Boseman – as both Black Panther and his alter ego King T’Challa – riding atop the LC 500, and driving around in the LS 500 F Sport. This year Super Bowl spots are going for $5 million for a 30-second spot.

Walton Issacson has been working with Lexus since 2008, helping the brand to better connect with Black, Hispanic and LGBT communities. When Marvel approached the agency about participating in “Black Panther,” Walton says the opportunity was too good to pass up. The luxury car brand had two new cars to promote, and it was the perfect project to connect with younger, and more diverse consumers.

“If you look at black affluence, that growth is outpacing all other segments. If you look at who’s going to movies, young black and Hispanic consumers are going at a disproportionately higher rate that other consumers,” said Walton. “Any brand that is trying to have a modern approach to marketing has to connect with multicultural audiences.”

According to the Motion Picture Association of America, the number of frequent African-American moviegoers (attends one or more movies a month) increased to 5.6 million in 2016, up from 3.8 million in 2016. At the same time, black consumers made up 15% of moviegoers, while comprising just 12% of the population.

The focus on marketing to black consumers isn’t unique to Lexus. Microsoft paid for product placement in the hit 2017 movie “Get Out,” and McDonald’s, Walmart, Coca-Cola and Toyota have all made noticeable efforts to reach diverse consumers.

Why the extra attention? The black community’s increasing spending power is a major factor. The University of Georgia’s Selig Center for Economic Growth reported that the purchasing power of African-American consumers reached $1.2 trillion in 2016, and will hit $1.5 trillion by 2021. African-American women are the ones leading the charge, with 23% over the age of 25 completing at least a Bachelor’s degree (up from 18% in 2005.) And advanced education has led to higher wages for black women and increased entrepreneurship. In fact, the U.S. Census Survey reports that black women are the majority owners in over 1.5 million businesses with more than $42 billion in sales.

“Now, marketers must also recognize the intercultural influence of black women on the general market as an increasingly vital part of how all women see themselves, their families and the rest of the world,” Grace said in a report.

In the case of Lexus, the luxury car maker recognized the cultural importance of “Black Panther,” and it’s paying off. “Black Panther” is poised to be one of the biggest movies of the year, already setting a record on Fandango.com as the top pre-selling Marvel movie of all time. The movie officially opens Feb. 16, and some experts predict it will bring in $100 million to $120 million in its opening weekend.

Though Walton says selling cars isn’t the only priority.

“We want to drive more sales for Lexus, but other things are really important too, like making sure we’re a part of the conversation in these communities as a brand that is doing great work,” he said.