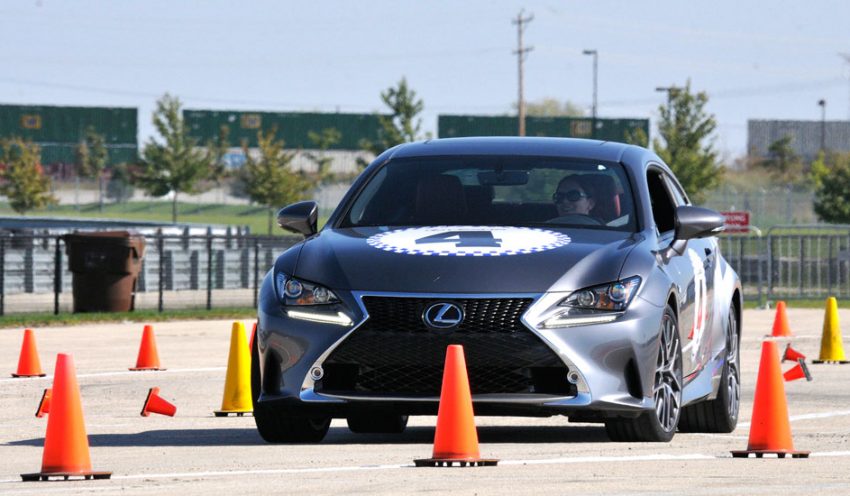 My friend Joaquin Ruhi from Kaizen Factor attended the first leg of the Lexus Performance Driving School at the Palm Beach International Raceway in Jupiter, Florida on October 1st. Here is a condensed version of his experience, and I highly recommend reading the original article for more even detail.

The Lexus Performance Driving School kicked off with an introduction by Scott Pruett, one of the most prominent American motorsports drivers ever, with a record 60 wins in IMSA racing, eight American Road Racing Championships, and an LMGTS Class win at the 24 Hours of Le Mans in 2001.

(Lexus fans, however, will probably best remember him for his 2004-2007 run with the Chip Ganassi Racing, which including an overall win at the 2007 Rolex 24 at Daytona. I chronicled that era of Lexus racing in a series of articles for the my.IS website.)

Scott is also one of the drivers for the 3GT Racing Lexus RC F GT3 racer (sounds like a tongue-twister or a dyslexic’s nightmare of S-FR / F-RS proportions), which is set to debut at the Rolex 24 at Daytona in January 2017.

The RC F GT3 wasn’t present at the Lexus Performance Driving School (though a concept prototype version was present), but car enthusiasts were able to sample a quartet of the marque’s more sporting models.

(Given the event’s timing, all were 2016 models, so it’s hard to say if the changes to the 2017 IS would have made a noticeable seat-of-the-pants improvement to the battery of tests at the Performance Driving School.) 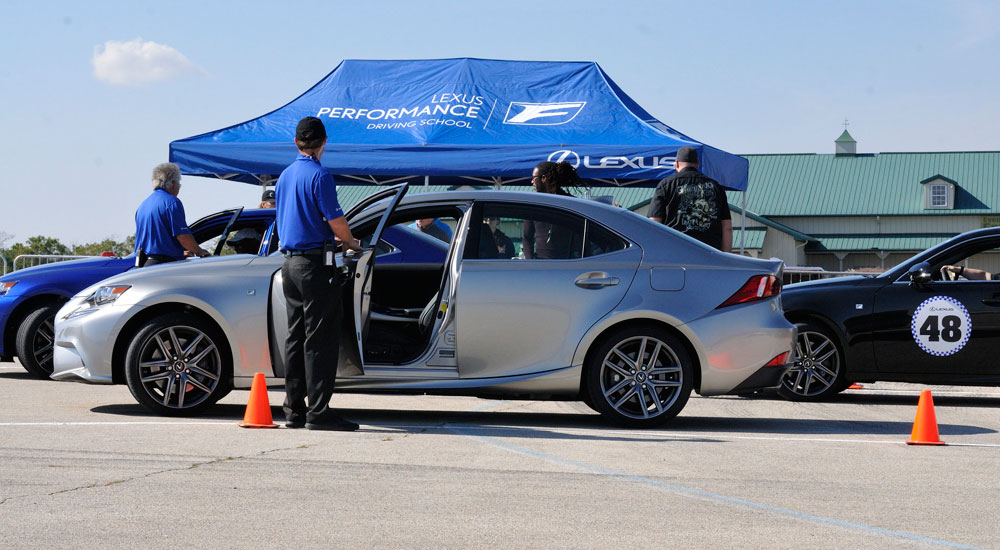 I was part of the 15-member Red Group (there were also Yellow and Blue Groups), and we started out with what would be described as a braking-then-slalom in the IS 350 F SPORT and RC 350 F SPORT.

The first of two runs demonstrated the anti-lock braking system (ABS), and involved a rapid straight-line run followed by hitting the brakes at a designated point while maintaining a straight line. The second run was fundamentally the same, but with instructions to turn a bit rightward at the end. I inadvertently got ahead of myself and also veered right at the first run. Both runs then segued into a 5-cone slalom run.

I have experienced skid pad tests where the course was doused in sudsy detergent just to make things really interesting, but here, just water sufficed. The test vehicles were RC Fs equipped with the optional TVD torque-vectoring differential. 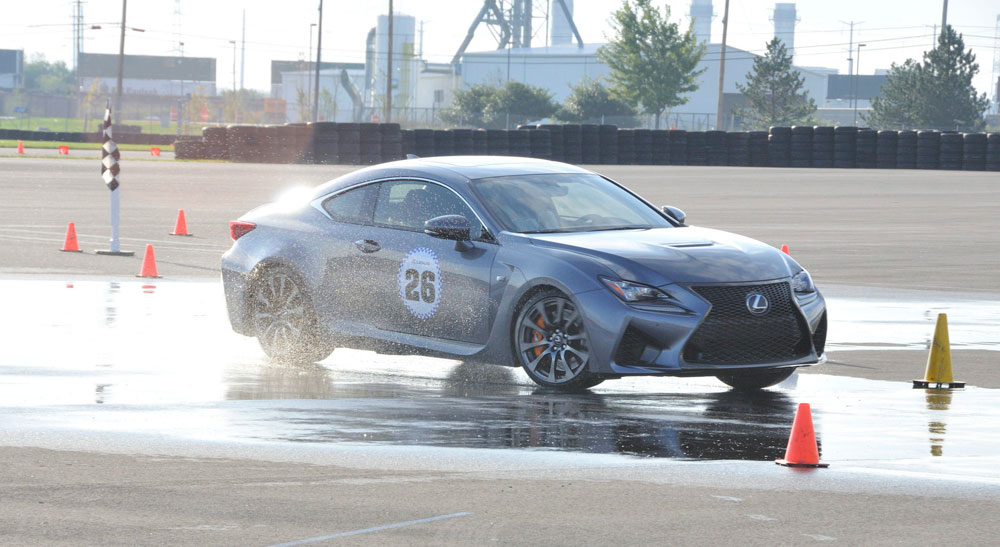 Around each of 2 runs of the circular skidpad, we were to suddenly stomp on the gas and then steer and control the skid. During the first run, self-preservation took over and I hit the brakes instead. On the second run, I did much better and had a fun, easily controllable skid.

We then moved on to Palm Beach International Raceway’s 0.8-mile go-kart track, which is actually more of a mini-road course with a couple short straights set up with a 3-cone slalom.

This is hardly the best place to show off the handling abilities of a just-over-2-ton medium-large sedan like the GS F, but during two practice laps and one timed run, it acquitted itself quite well.

In spite of being a bit sloppy about three-quarters into the course, I managed the fastest time (57.458 seconds) among the 15 Red Group drivers. However, when the overall times for all the groups were tallied, I didn’t even make Top 3 (those were in the 55-56 second range). Even so, Scott Pruett obliterated us all with a 53.795-second time.

One highlight of the event was the Lead/Follow on the full 2-mile road course using RC Fs and GS Fs. We were paired off in each car and drove in “trains” of four or five cars, with a lead car driven by one of the professional drivers on hand. 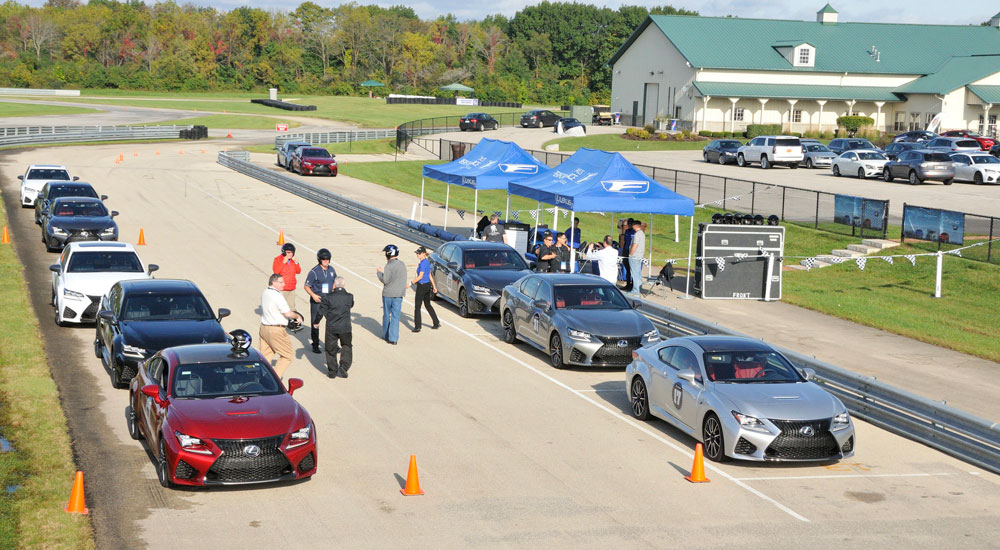 At track driving event lead/follows, I’m one of those that clamors and rushes to be right behind the lead car. To be fair to everyone, though, a clever rotation was set up for the first time in my recollection: Whenever the lead car flashed its left turn signal (usually in a straightaway), the car immediately following would move to the left, the rest of the cars would race closer to the lead car and the former second car would move to the back of the line.

This way, all the follower cars got a chance to be right behind the leader during the first 3-lap stint. Then, we stopped to rotate driver/passenger in each car, and the new driver did his own 3-lap stint. This was followed by the original driver back behind the wheel for an additional 2-lap session, and finally the second driver doing his own 2 laps.

And how did five total laps in a Lexus RC F or GS F feel? The GS F was certainly a fun and memorable experience, and the car’s tenacious handling and lack of serious body roll or drama certainly belied its bulk. The cars were, naturally, placed in Sport+ mode. 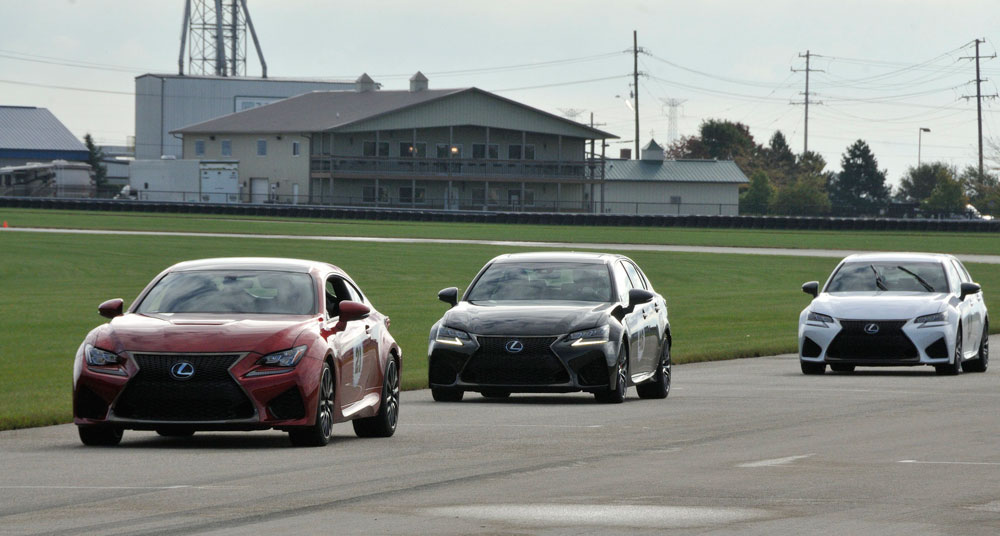 We also followed Lexus’ advice to just leave the transmission in Drive and let the AA80E 8-speed automatic transmission do its thing. A wise decision, as its programming (which includes a lockup torque converter in all but 1st gear) was seamless, with throttle blips at just the right times.

Our lead car minders kept us to a 114 mph speed on the track’s longest straight, but the GS F certainly seemed capable of more…

The other major highlight came when a number of us were allowed to ride along on hot laps driven by Scott Pruett. I was among those selected, and riding shotgun with Scott in a Lexus F sedan all-out on a racetrack brought back fond memories of Laguna Seca and the IS F press preview, not to mention Homestead-Miami Speedway and the LFA. 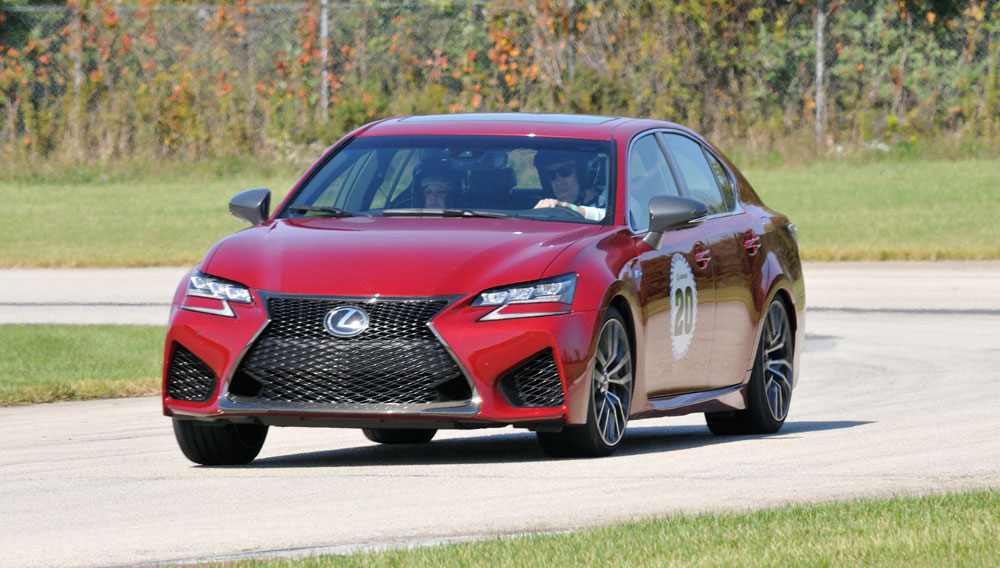 Unlike us mere mortals, he drove it in manual mode using the shift paddles, but there wasn’t any undue jerkiness or lurching. And on that long straightaway? Mr. Pruett was hitting 136 mph, and probably could’ve gone even faster had he not had to haul 3 extra passengers around…

The final highlight was a Caviar LC 500 coupe rolling out onto the track’s edge. Scott Pruett gave three lucky event participants (one from each color group, chosen by random drawing) a hot lap in Lexus’ newest GT coupe. No, I wasn’t chosen for that, but the event itself was such an overall winner that I didn’t mind too much. Better to spread the good stuff around…

When a half day isn’t enough…

For those among us who want more, more, more, Lexus offers a 9-hour long Performance Driving School Full-Day Experience that adds an advanced driving theory class, an on-track exercise that teaches the proper racing line, and presumably, more on-track seat time. The cost for this is $895, as opposed to the 5-hour Half-Day Experience’s $495 admission fee.

In general terms, the events are held over a 3-day period near or on a weekend, with the Full-Day Experience held on the first day, the two Half-Day Experiences on the second day, and the third day offering a dozen Express Experience starting time options, which vary according to locale. And that leads us to ponder…

After the initial visit to Florida’s Palm Beach International Raceway, the Lexus Performance Driving School tour stopped in Chicago. There’s one more event in 2016, at the New Jersey Motorsports Park in Millville, NJ. The final event will take place at Auto Club Speedway in Fontana, California. The full details can be viewed on the official Lexus website.

(Please note, these photos are not from the Palm Beach International Raceway session, but from the later event in Chicago. The photos are taken from the Autobahn Country Club Flickr account.)