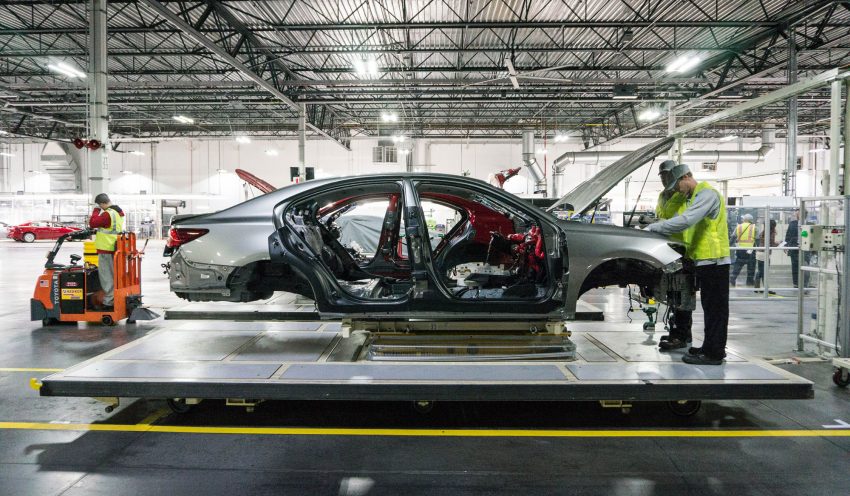 A Visit to the Lexus ES Manufacturing Plant in Kentucky

The Toyota Motor Manufacturing Kentucky plant just outside of Lexington takes up 8.1 million square feet and produces 500,000 Camrys, Avalons, and Venzas per year. It’s the single largest producer of Toyota vehicles in the world, and employs over 7,000 workers. This is a place that knows how to build vehicles.

So when it was announced that the Lexus ES 350 would be coming to Kentucky with an annual production of 50,000 units, it probably doesn’t seem like a big deal. However, it required the management team and every one of the 750 employees to relearn every step of the process, with over a million hours of training before the first ES came off the line.

When the ES 350 started production on October 19th, it marked the first time a Lexus has been built in the USA, and only the second time Lexus vehicles have been manufactured outside of Japan. Now five months after launch, Lexus invited me to tour the ES facility.

Our first stop is tool & die, where coils of steel are stamped into the frame and body panels of the ES.

Manufacturing is a quantitative business, and there are numbers and goals for everything. This is when the difference between Lexus and Toyota products becomes clear — where the entire process of stamping parts for the Camry or Avalon has 13 quality inspections, the ES has 34. 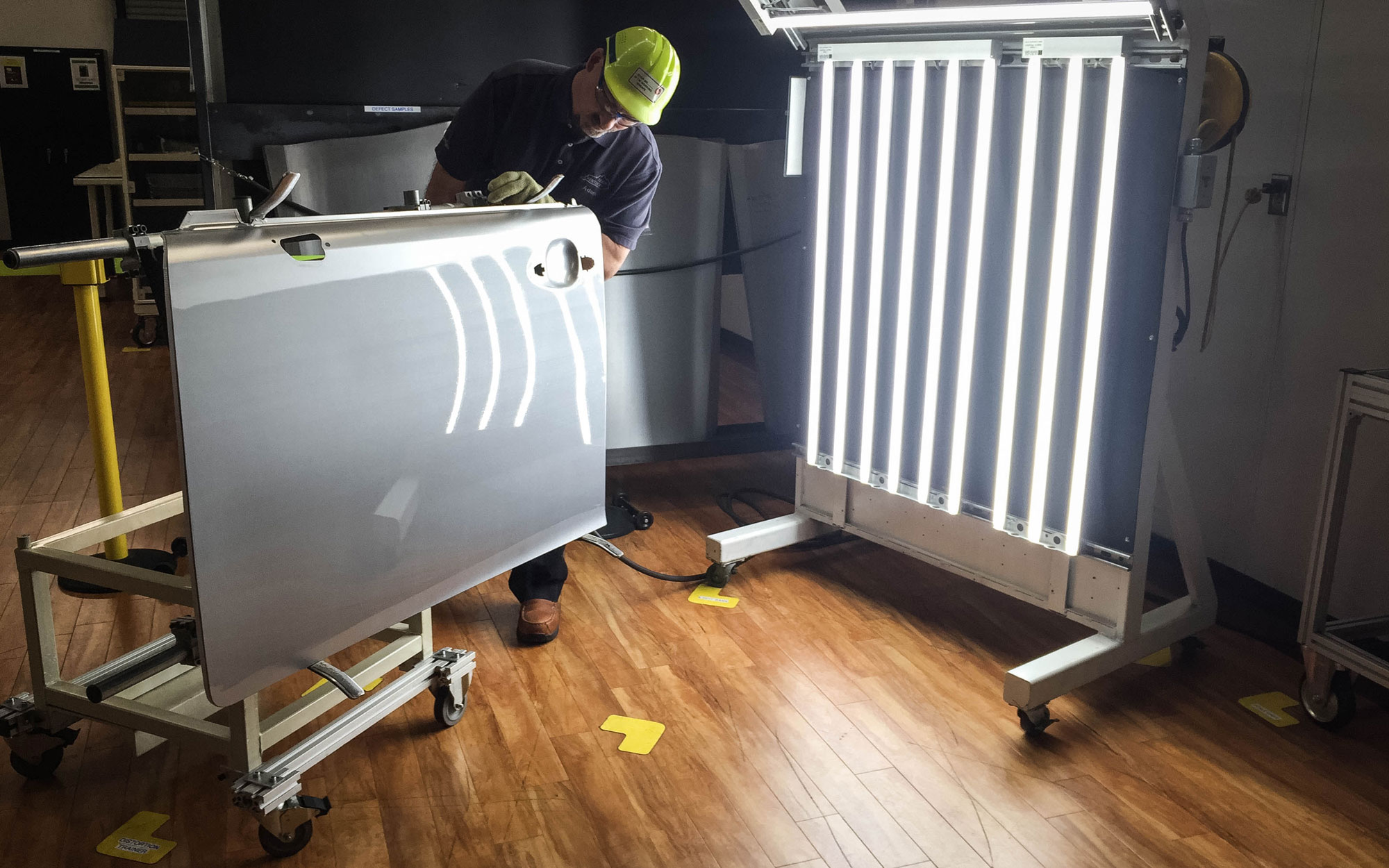 A factory trainer devised a machine that uses vacuums to introduce varying degrees of warping and rippling to sheet metal, from visibly deformed to only detectable by the hands of an expert worker, and we take turns trying to spot imperfections in an ES door panel by using the palms of our hands.

It’s a humbling experience, because the the machine has to be cranked up full blast in order for me to spot any defect.

The sixth-generation ES started production in Kentucky midway through its lifecycle, which means the majority of its parts are still manufactured in Japan.

Even so, approximately 30% of the ES is made up of parts built in the USA and Canada, including the major elements made right in the plant — the engine, the seats, and most of the steel exterior panels and unibody are all manufactured on-site.

Once the parts are stamped, inspected, and welded together, the ES is assembled by a group of workers called Master Fitters.

This is a demanding position — each Master Fitter is responsible for a single vehicle throughout the whole process, taking all the assorted body panels and under panels and fitting them onto the frame until the entire shell is complete.

Even more impressive, there’s only a .3mm gap tolerance between panels, and the Master Fitter must be within 2/3s of the limit. In essence, Lexus only allows a .2mm deviation, which is approximately the width of a human hair. 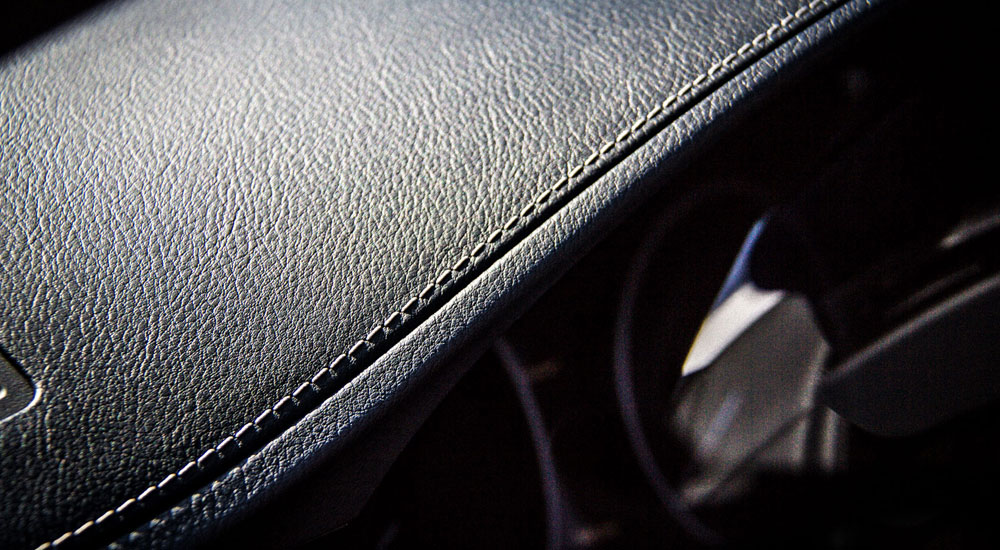 Midway through the day, we meet with Robert Lofton, a team leader responsible for a single element of the ES: the stitch that runs across the top of the instrument panel.

Once again, the numbers are astounding. In order to become a certified dashboard sewer, you must complete a four week training program that involves seven distinct steps and thousands of perfect stitches. However, you can’t even start the program until you’re able to fold a origami cat face in under 90 seconds using your non-dominant hand.

Imagine, all this training and effort for a purely decorative detail — the stitch doesn’t hold the dash together, its only purpose is to be pleasing to the eye.

The point Lexus makes with this presentation isn’t subtle, but it’s impressive nonetheless: If this obsessive workmanship is needed for a single dashboard stitch, what kind of training is required for the truly important elements of the car? 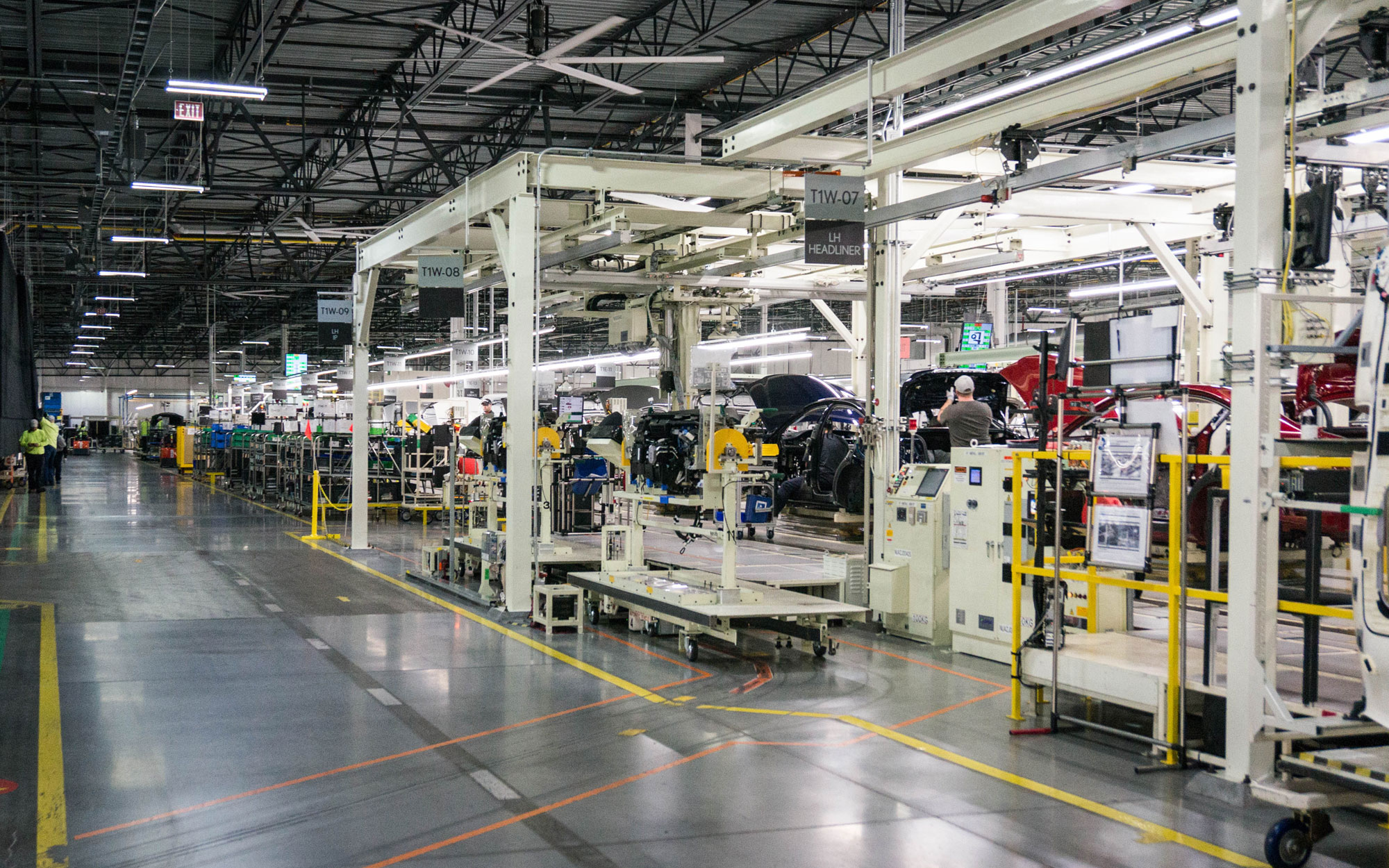 Our next stop on the tour is the actual assembly line, where all the parts of the ES are constructed into the final product.

(We skip the paint portion of the process, which makes sense — airborne contaminants are a huge issue when it comes to paint, and there’s a meticulous decontamination process before entering that area of the plant.)

It’s louder than an office building, but just barely — the ES shells run through the line on electric pallets, and despite the inherent complexity of building a luxury vehicle, everything is remarkably free of clutter. 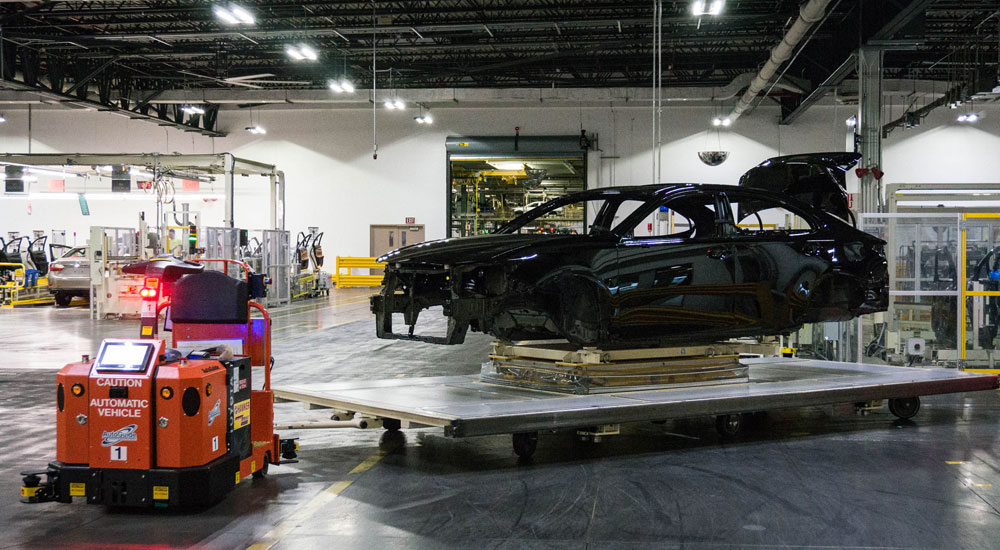 Right away, we have our first experience with a robot, which independently drives the ES body shell from the paint shop to the beginning of the assembly line.

As it turns out, the very first step is removing the doors. This avoids the extended width and removes a major obstacle, making it easier for workers to get in and out of the interior.

The doors are attached to another robot, which scoots away to the door assembly line. 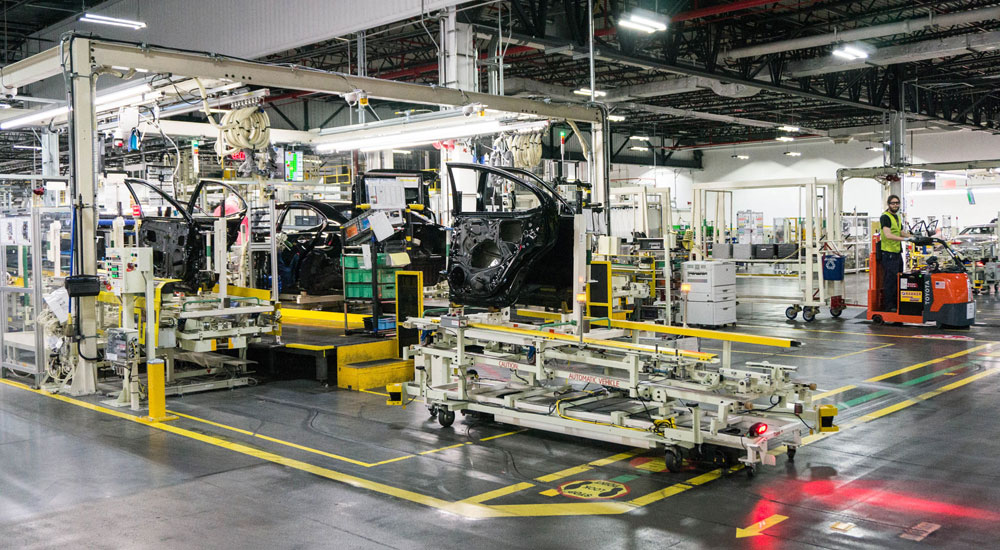 Every worker on the ES line has to memorize an average of 80 steps, and these steps must be completed in 305 seconds to keep everything moving smoothly. This is another contrast point to the Toyota side, where the average worker needs to remember just 25 steps.

The human element is everywhere, especially when it comes to improving the ES building process. Studious workers suggest kaizen improvements all the time — one example involved a rolling slide that removes a wasted trip down the line, another was an angled platform that elevated the interior carpet to avoid strenuous bending and lifting. 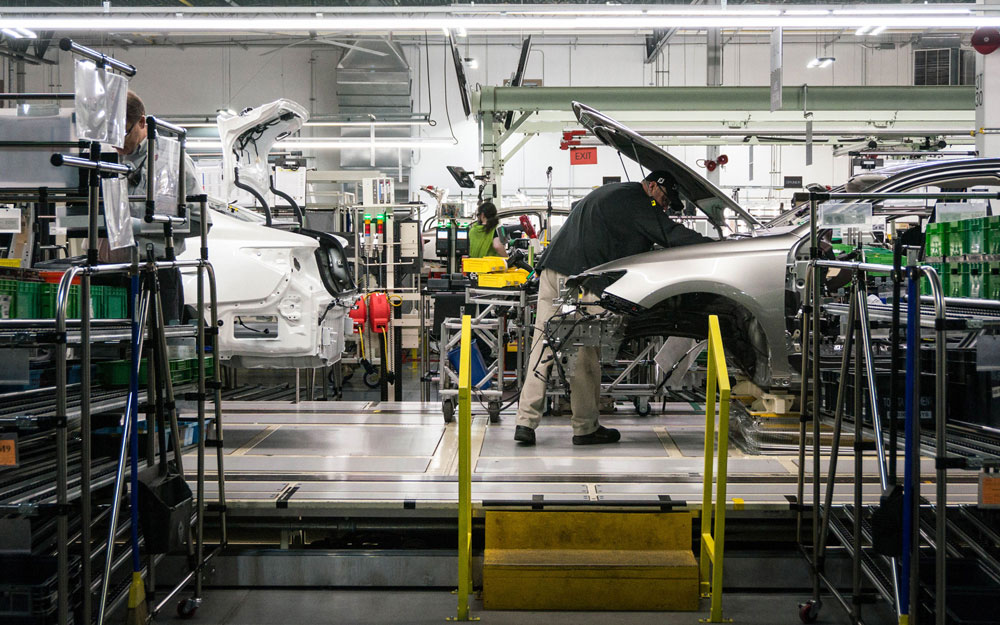 Central to the Lexus manufacturing process (and all Toyota factories) is the Andon Cord that runs the length of the assembly line. This cable can be pulled any time a worker needs help or spots a potential problem. If the issue isn’t resolved immediately, workers can stop the line to troubleshoot. This happens approximately three times an hour.

In the middle of the assembly line, there’s an area where workers can reconnect with their skills by using what’s called Sensory Tables.

In a way, it’s much like a factory game room — you can practice placing a LEXUS emblem by hand within 1.5mm of alignment, try pulling out a specific number of bolts from covered mystery boxes, or fitting together panels with a consistent 1mm gap. 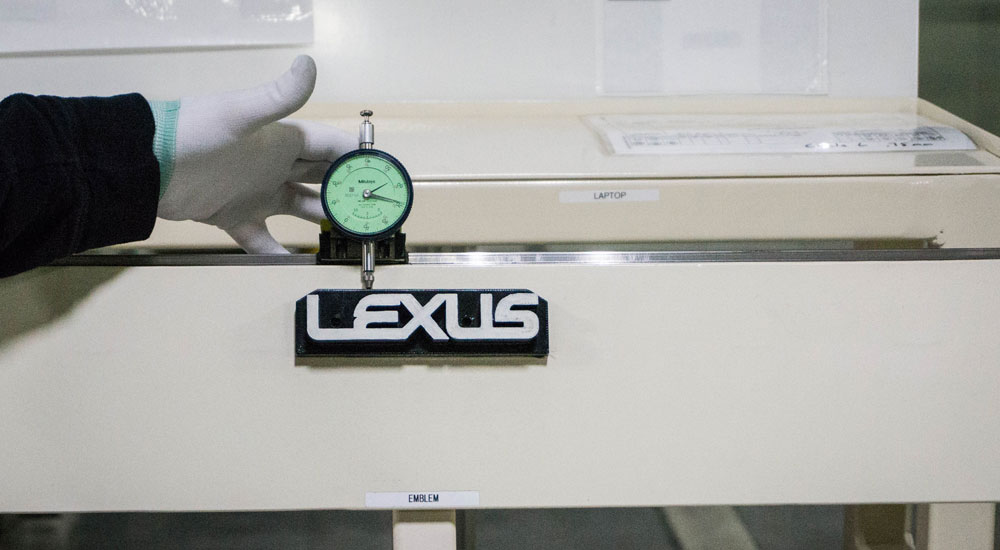 Everything wraps up in the Quality Assurance area, where the ES 350s are put through a battery of tests to make sure they’re ready for sale. Our final stop is a display where a Kentucky-built ES 350 is positioned beside an ES 350 imported from Japan. 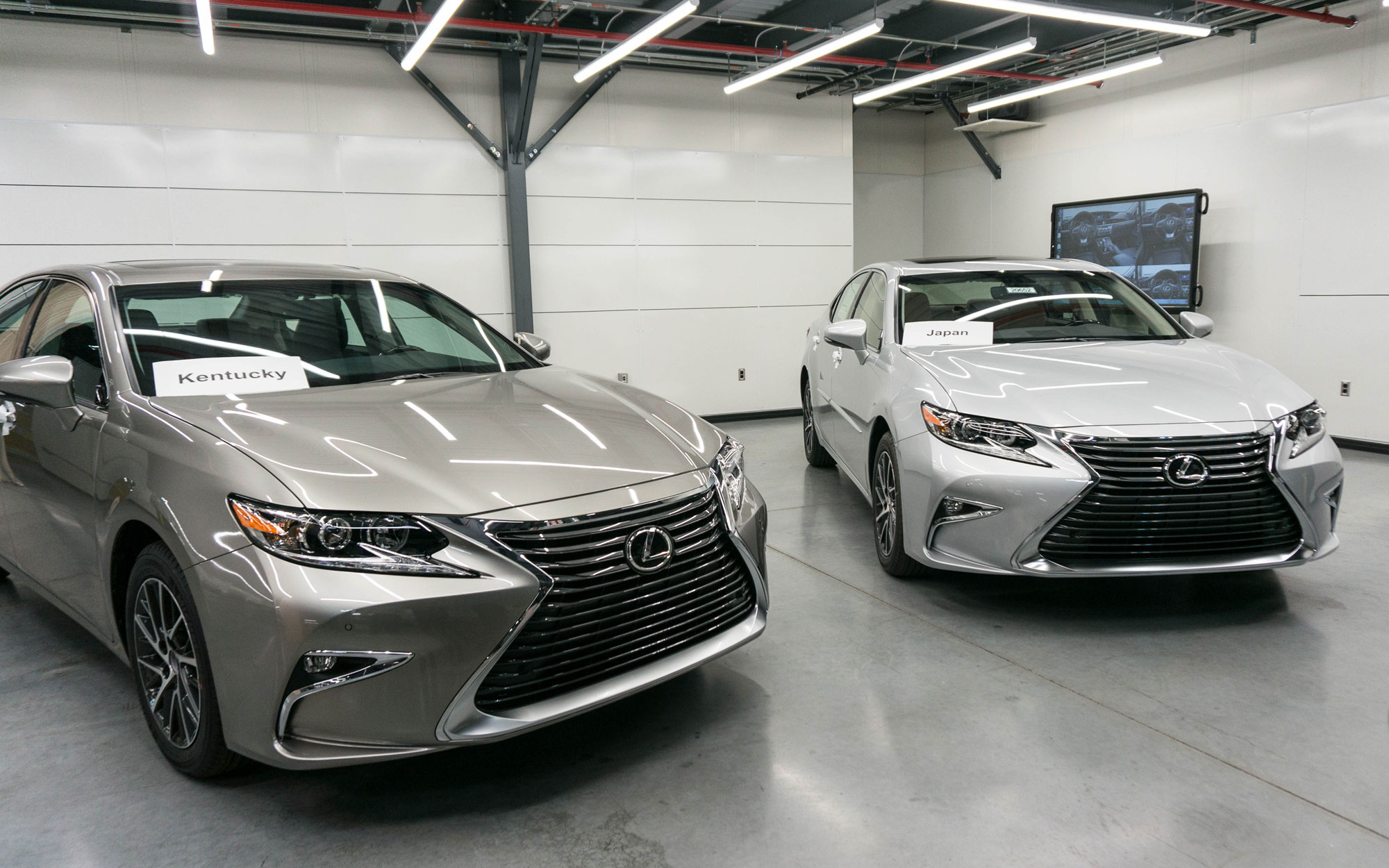 Other than the Japan-spec ES being equipped with door guards, the vehicles are near identical — the doors make the same sound when shut, the interior quality is pitch perfect, the dashboard stitching has the same attention to detail.

In fact, the only difference has to be pointed out: at the insistence of fellow journalist James Bell, I sit in each cabin for a smell test. The Japan-spec ES has a woody, deep fragrance, where the Kentucky-built ES is more tart and sweet.

It’s a hilarious moment, and I’m still laughing about it as we exit the plant.

Since starting Lexus Enthusiast, I’ve been fortunate enough to tour three different manufacturing facilities — the RX line in Cambridge, Ontario, the ES/RX line at the Kyushu plant in Japan, and now the ES line in Kentucky.

It’s this pride that keeps a new ES 350 rolling off the assembly line every 3-5 minutes without fail, always with the same quality. Lexus sent us home with this new behind-the-scenes video, and it seems like the perfect way to close out: