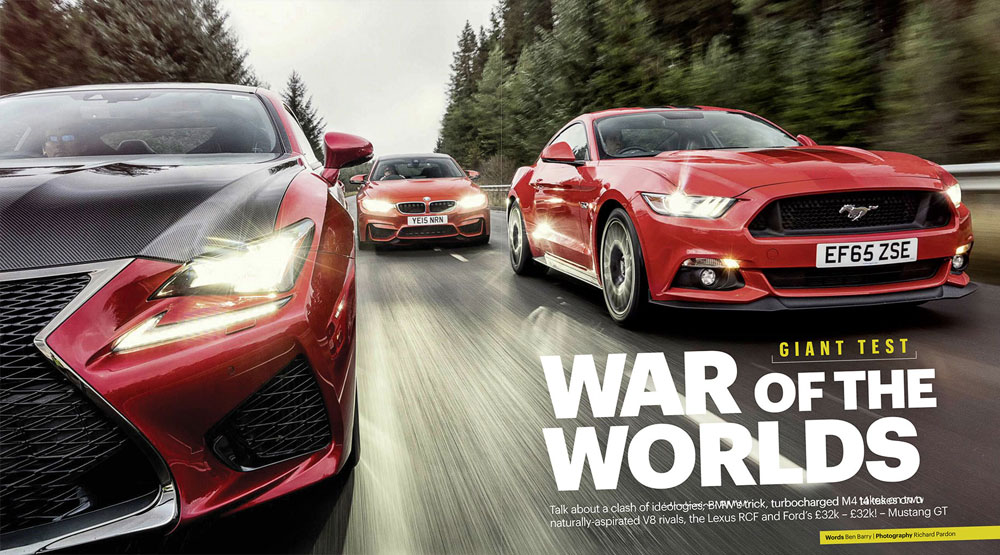 Ben Barry from CAR Magazine has just compared the Lexus RC F with the BMW M4 and Ford Mustang — the entire print article has been posted on the Lexus Enthusiast forums, but * spoiler *, the RC F took top spot in a surprising upset:

Think of the RC F as the place where a Nissan GT-R and a last-gem BMW M3 crossover and you’re somewhere close: the crazy Gundam-robot-like Japanese design, the barking V8, the frisky but perfectly balanced chassis, all of it feeds into a package that feels unique yet somehow déjà vu.

And when I get to pick which car I want to drive home, I don’t think twice about jumping in the Lexus. It’s the best of an imperfect bunch, but that doesn’t mean I don’t desperately want to own one all the same.

It’s a strong win for the RC F — it could be argued that the Mustang was outmatched, but it did finish second ahead of the M4. One of the best parts of the article is this infographic comparison: 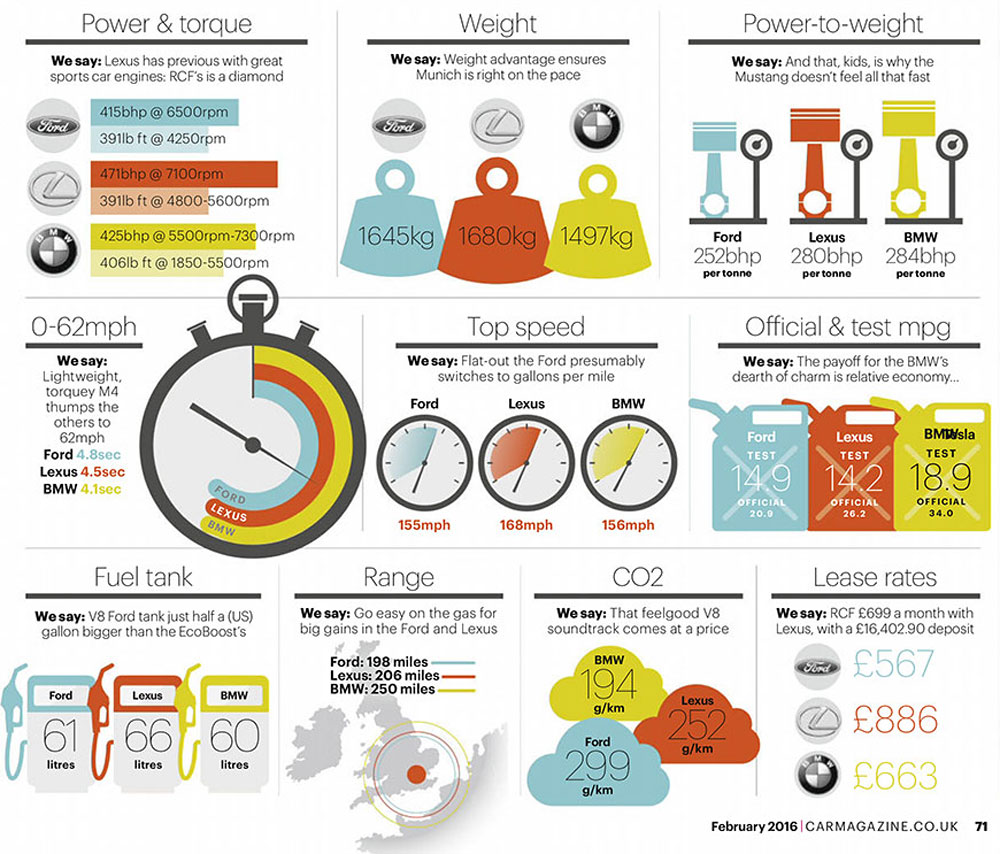 where is the entire article print?
There is something wrong with vehicles weights, the chart says the RC F is 1680 kg = 3704 lb !!
Nice!
It goes without saying I'm for Lexus, but this does not appear to be a fair comparison.You're pitting a top of the line RC-F vs. a top of the line M4 vs. a base Mustang GT. Giving up 55 to 65 HP to Lexus from the get go SHOULD give Lexus the win in all power based categories.It seems a Shelby, Penske or Roush based Mustang south of 500 HP would have evened the playing field a bit.I'm glad the writer chose the Lexus, but HP vs. HP, on paper, this should have been a runaway win for the L.I'm impressed with the as tested fuel economy for the Mustang over the BMW and Lexus. No worries with gas at $1.79 per gallon, but once it returns to $3.00 a gallon or more, the gas alone would make owning the Lexus or BMW somewhat prohibitive. A range of only 200 miles per tank or less would give me near electric car range anxiety over my fuel tank volume if I had to drive any distance daily. Not raining on the Lexus win, hooray for the positive media, but I feel valid points if doing a completely neutral comparison. I daily drove GM V8 powered Pony Cars up until Chevy and Pontiac killed them two years beyond, so I know the struggles of a 400HP V8 from experience. But oh, that window cracking, neighbor angering rumble when you turn that beast over in the morning :-)
I always said the RCF is a better complete package then the M4.   When you get a non bias reviewer.. this happens.   Good stuff !
Lexus is a lux brand, they would never build a stripped car...for competition, yes
Good win, but the article lost me when it says the RC-F has "GT-R styling". WTF?
Driving the NX 450h+