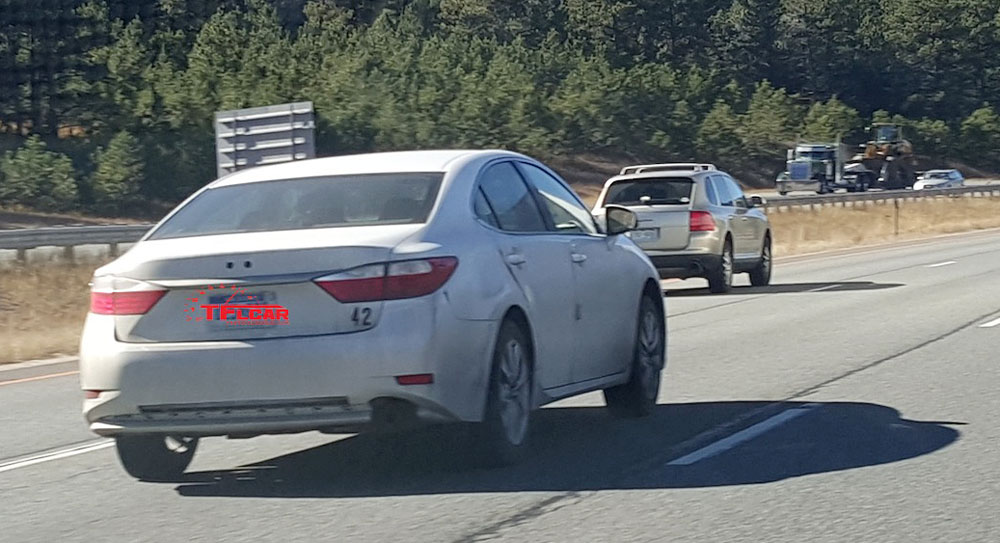 A debadged Lexus ES prototype has been spotted in Colorado by TFL Car, who believe it to be a high-altitude test of the sedan with a 2.0L turbo engine — let’s zoom in:

The only real clue is the single exhaust, which could mean a new engine setup or simply a new test of the existing ES 300h.

(In a weird coincidence, Lexus Enthusiast member Bulldog1 spotted a similar prototype in Vegas during SEMA).

It wouldn't surprise me if it was the 2.0 Turbo. They seem to be putting it in everything! We just got the RC 200T in at the dealer yesterday. I've heard rumors of a CT 200T as well. Or a similar models to the CT with the turbo in it
if its an ES turbo, wouldnt they keep the dual exhausts?
I'm on the fence with the 2L Turbo in general. Coming from almost 1 year of ownership with this engine in the NX, I can say it's good on gas and has a strong pull, BUT, it's not as smooth/refined as any Lexus V6 (vibrations felt) and power delivery is laggy especially from a start. Good or bad, this engine is a necessary reality in the today's world of stricter environmental/emissions compliance so no surprises to see it expanding in more Lexus models. Expect this engine (or slight alterations of it) to go mainstream in next gen Toyotas like possibly the Camry replacing the optional corporate 3.5L V6 in that offering.
Hey guys, I think it's a AWD prototype!?!?! Look at the gap between the front fender and the tires. This is sitting higher than the regular ES350. Earlier this year, Lexus asked the GSM of our store about his thoughts on a AWD ES350? We are in Colorado so that will be a huge boost in sales. I hope I'm right!!!!
I partially don't believe it's specifically an XV60 ES variant, but that of possibly the next generation in mule form. Due to the new platform, unfortunately it may require more lead time and is being front-loaded in its development programme. At the moment Lexus is likely going through various 7ES concepts internally (Avalon as well), if not already settled on one, meaning styling on the next ES has been identified. That is where engineers like me, prepare and test the design for over several months until sign-off. I might be wrong of course and it's just an AWD or ES200t mule. On another note, I may have just seen the LF-FC 2 weeks ago, but surely it existed in some form 2 years ago as an 2017 LS proposal and is a veiled version of the final product (100% finished by no later than Q3 2014).
Makes me wish I had photographed what I saw but it was dog eat dog bumper to bumper traffic headed north on Paradise Road. Temps were in the high 50's and the driver had the windows down. I remember thinking, "Who stripped an ES?" and saw the rear, the left side and front while crawling along. The noticeable absence of ANY badging plus missing things like wheel caps and the small square covers on the bumpers is what really caught my eye. I've seen other camouflaged mules / prototypes in Las Vegas during SEMA week, but owning a 2015 plus previous years ES350, I instantly recognized the body. It didn't seem to have any distinctive noises or body panels to it. The mystery continues...
All about the 2023 RX