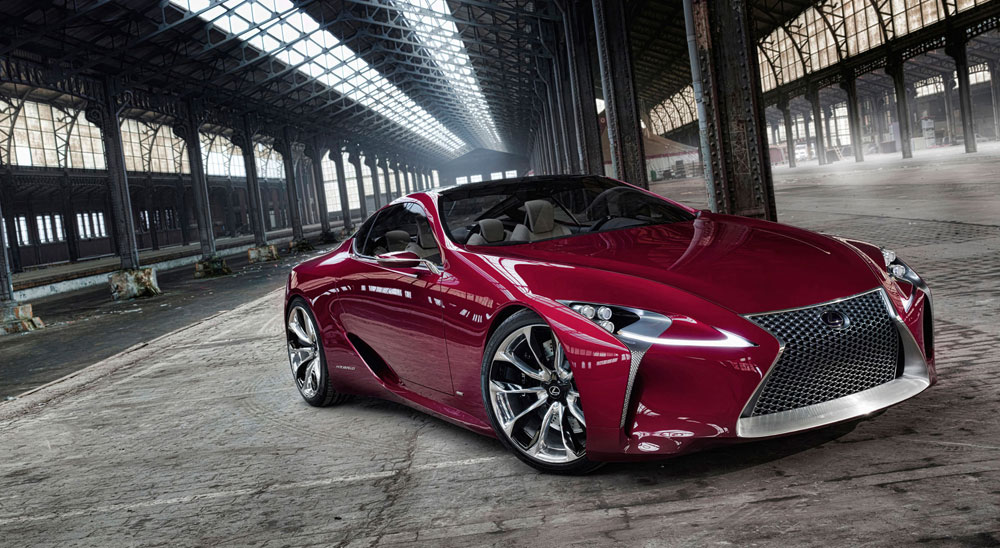 Automobile Magazine has an article on potential powertrains for the upcoming Lexus production model based on the LF-LC concept:

Based on the next-generation Lexus LS, the new two-door will offer three potent powertrains: a high-output version of the brand’s 5.0-liter V-8, a hybrid setup making around 500 hp, and a range-topping F with a twin-turbo V-8 that could top 600 hp. Lexus hopes the revival of the SC name will evoke memories of the elegant SC coupe from the 1990s.

The Lexus LS hasn’t really filled its flagship shoes since the 1990s, and the sensational LFA was a hypercar with little real-world appeal. A high-style, high-performance coupe that’s more accessible could bring cachet to Lexus. That’s “accessible” in reference to the LFA, of course. The SC should push past the $100,000 mark, relatively unfamiliar territory for Lexus.

This information is identical to a Motor Trend from last year, right down to the idea that Lexus will resurrect the SC nameplate despite trademarks for LC 500 & LC 500h.

No matter, I can’t mention this article without highlighting this passage:

The Lexus LS hasn’t really filled its flagship shoes since the 1990s, and the sensational LFA was a hypercar with little real-world appeal.

There’s so many levels of wrong in this sentence, I’m embarrassed for whoever wrote it.

I think the SC will top 110K+ boasting a TT V8 with output between 550-600hp.
Deliriously excited as I am about any all aspects of this car,the thing I'm most curious to learn more about is the hybrid drive line. Is it going to be a cvt-type,or something new that allows for genuine gear changes?
I think it would make more sense if this flagship coupe is called the LC instead of SC. Their flagships are denoted by the L as the first letter (LS & LX). Having three coupes in the lineup wouldn't hurt, SC, RC and the range topping LC.
I posted a thread about the LF-LC under the Lexus SC category. I was wondering if it will be called SC or LC and then I gave my opinion of what the car should be named. Check it out!
LC looks too much like Land Cruiser?
Joy of 600hp tears...
Wow, if this really happens...or should I say Lexus makes this happens, this will set them up to be taken very serious by exotic buyers who did not qualify to purchase the LFA during it's historically short run. A 600+ HP Twin Turbo Lexus SC Coupe, with or without AWD, would definitely bring back even more "Whomp" from the days of the 90's SC's. Also, I know Lexus can't wait to show off their newly engineered and in-house manufactured super efficient turbos they've been secretly developing like forever!
With the current trend, "Twin Turbo" seems more appealing than supercharged. Altho if they use the SC name, a S/C SC sounds interesting
Looks like that GHMB Lexus 630HP Turbo V8 project from 2012 will not go to waste after all. If the next SC will get that turbo V8, it will arrive in the Lexus LS-F in a couple of years as well. BD