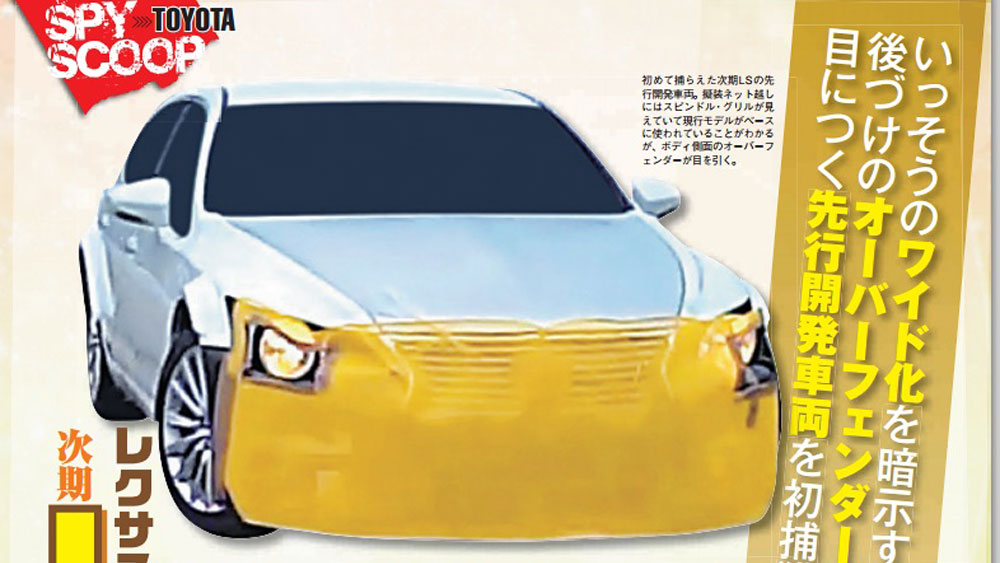 A very awkward-looking next-generation Lexus LS test mule has been spotted by Japanese magazine MAG-X — here are the images posted on the Lexus Enthusiast forums: 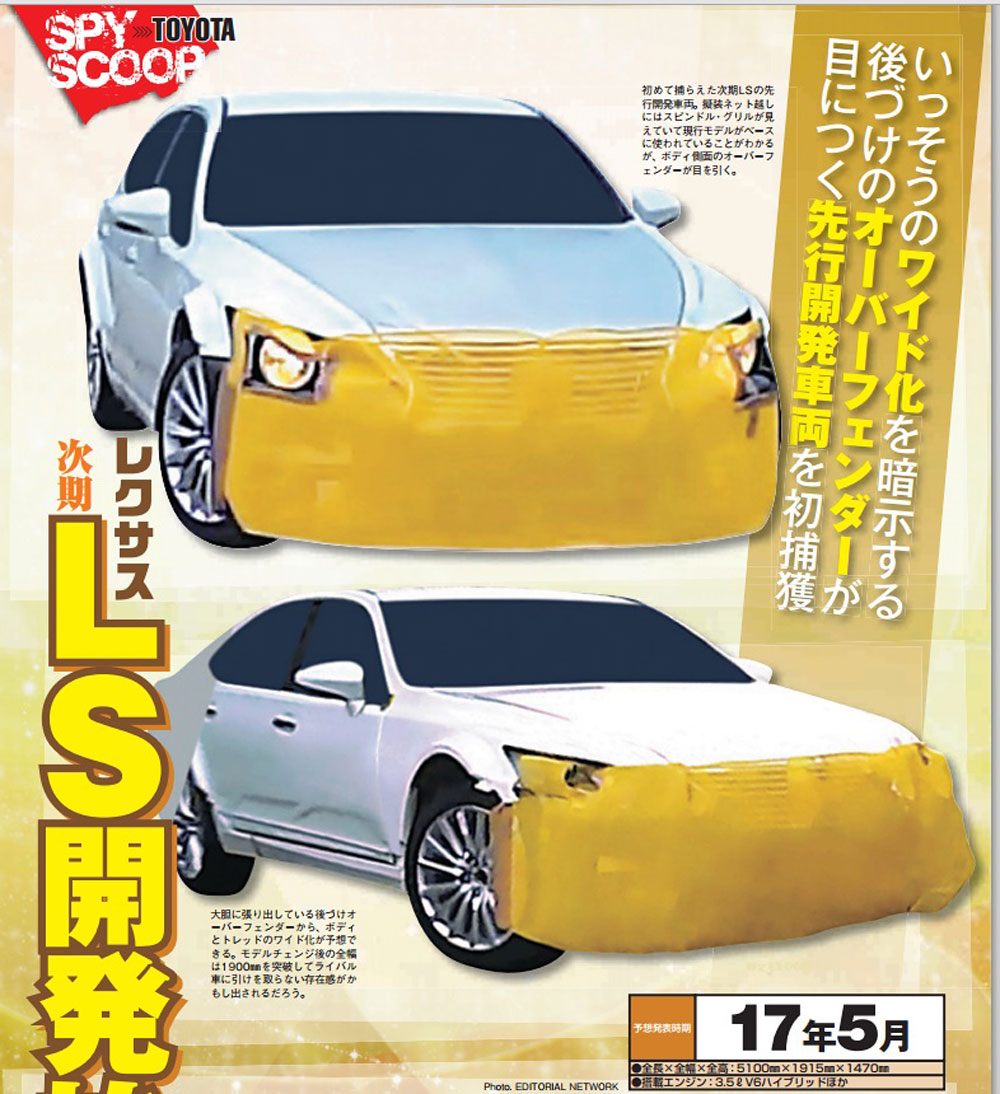 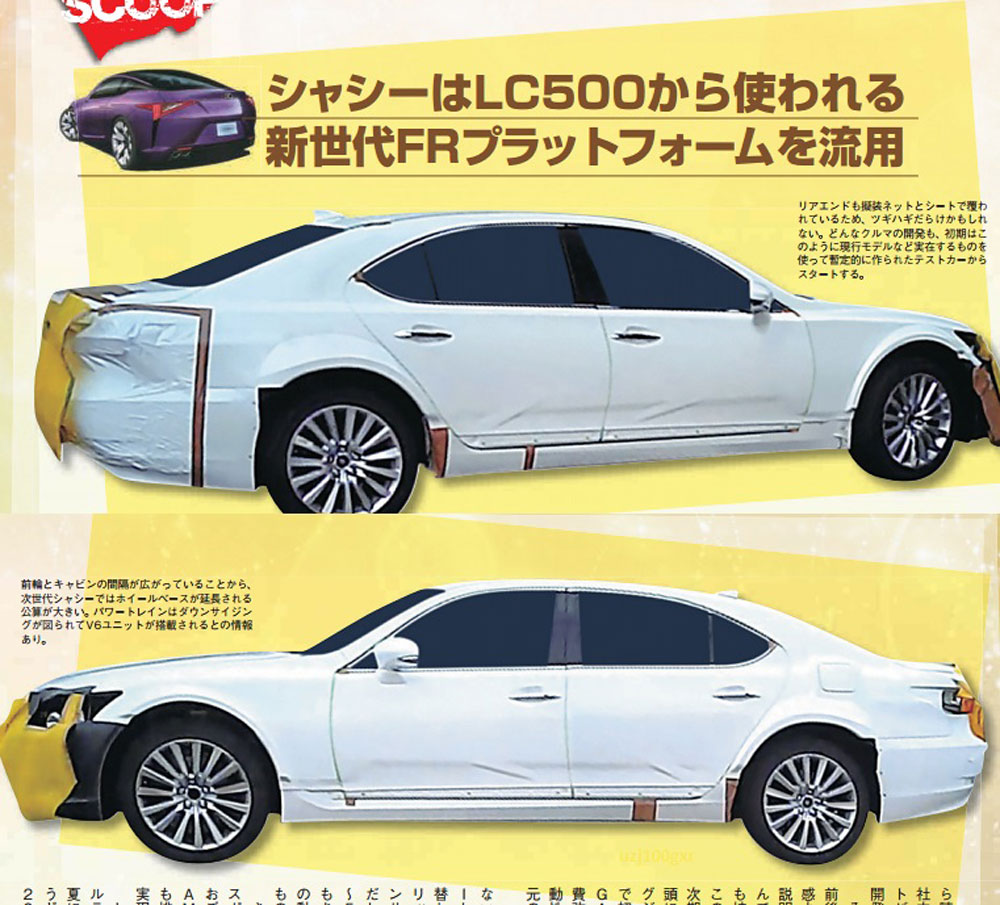 With the current LS design acting as a shell overtop the new vehicle underpinnings, there’s not much we can discern from the images — much of the car looks to be wrapped in white plastic, and the yellow fabric shields don’t give much away with the front and rear.

Even so, there is one point we can take away from this test mule — the next-generation LS is coming. Just yesterday, an LS 500h trademark was discovered in Europe, and I have received confirmation that it has also been registered in Australia.

Images from MAG-X (Thanks Carmaker1)!

From the words of Mr. Lebron James "It's about damn time" Know I know the next gen LS has been in development for years. But I'm glad that Lexus is actually almost done with the a Next gen LS. Time to start thinking what the interior will look like and what new technology will it have!
Looks like a long wheelbase model. I also noticed something about the LC500 above the last post, we need a translator.
The design makes me disappointed. It reminds me of the previous generation ES. But it seems to be promising. The current gen was the most advanced car on road in 2007,2008. Lexus need to focus on new technologies. I hope there will be a 10-speed transmission, the return of automatic parking system, night vision, and the autonomous driving system(like the system on the CT6). Also, a new powertrain and a system like the Magic Body Control. Last week my uncle took me a ride in his 2015 S550 and it was just amazing! Hope Lexus can build a better car than the S-class. The S class's reliability is horrible! The 2016 BMW 7er is ugly and unimpressive, the CT6 is just bland and look so cheap, the XJ is super unreliable, the A8 sucks, so it is such a great opportunity for Lexus to gain customers from the Germans! But lexus really need to improve the design.
It looks like the wheelbase is stretched, based on the rear length and cut out of the rear tire well. I'm excited now! Aiming for #1
Thanks krew, but I must honestly say, maybe the title should say "test mule" instead of "prototype". Nothing wrong with calling it prototype, as there are various stages of prototyping and this stage is very much one of them. It's just much easier if people can distinguish a "test mule"---that utilizes the incumbent generation's body shell---against a running test vehicle of the production design and packaged components in the form of a "prototype". I can see some people casually expressing premature disappointment/puzzlement, even after all your efforts to clarify in the body of text below, that this is just a mule using the current LS body. This site is very good and highly accurate, so one is rarely confused when reading anything here. Actual 5LS prototypes have been running since last year, but not yet outside of high-security Lexus test facilities in Japan surely. I think this might be testing an alternative powertrain that may launch in 2017, some months after the petrol variants. The final exterior design had to have been reached by late 2013, if not fully finalised then. 36 months from then to production is usually the time frame on such a large product and pretty much a typical pattern for the LS. Akio Toyoda, as per the words of a well-regarded Lexus salesman and enthusiast, is "personally invested in this project" more than anything. It will be world-class apparently, but one hopes it holds true. This is the car that he is constantly chaffeured in (current LS600hL), so I am sure like Dr. Dieter Zetsche of Daimler AG did with the W222 S-Class, he wants something to his taste that he can enjoy day-in, day-out. The LX being introduced in Japan this year, might also have to do with his own interests to a degree and wanting more than a Land Cruiser as an alternative. Mary Barra of GM is chauffeured in an Escalade daily, so it is not too shocking how that happened. In my own work at my job, I have stressed this philosophy to any complacent superiors, on why our best offering must receive the highest possible level of investment, while not being a loss maker. Image building, conquest customers, absolute quality, and innovation.
The ES? So the current LS looks like an ES and not the other way around? The next LS "is" already testing, but not outside of heavily guarded company test facilities. Unlike their European counterparts, Toyota does not tease development of their vehicles prematurely. Whatever it looks like design-wise, it was signed off a long time ago and this exact mule is testing a powertrain not due until mid-2017. The regular 2017 LS may surface in spy shots as an LHD prototype in the next few months. I agree with much what you said though, the current generation was on top of the world during 2006-2008. I greatly disagree in your assertion of our XJ, as I do try to take an unbiased stance to things. Our X351 is not super unreliable, that is just an off-handed assumption. Being familiar with the incumbent model, very familiar with its replacement and new suppliers for that programme, one cannot just take isolated cases as a measure of quality issues across the board.
Production rims already?
Looks pretty nice for a tester..
I guess they don't make 20" steelies
The LX going to Japan? Where did you read that? That wouldn´t make too much sense...
Jaguars have frequently been unreliable. They are fast, classy, and luxurious, but just after 20000 miles, you will have to cope with a lot of problems. Their quality has improved in recent years, but they can't match the Lexus's quality. We have been waiting so long for a next generation LS, and i hope it will lead the car industry like it did in 1989! And i'm just a 15 years old boy, i've never owned any cars in my life! I even don't know how to drive. In my country, cars are too expensive, so owning a Camry means you are rich and successful! There are only dozens of Jaguars in where I lived, most people have never seen or heard of the Jaguar cars.
Driving the NX 450h+