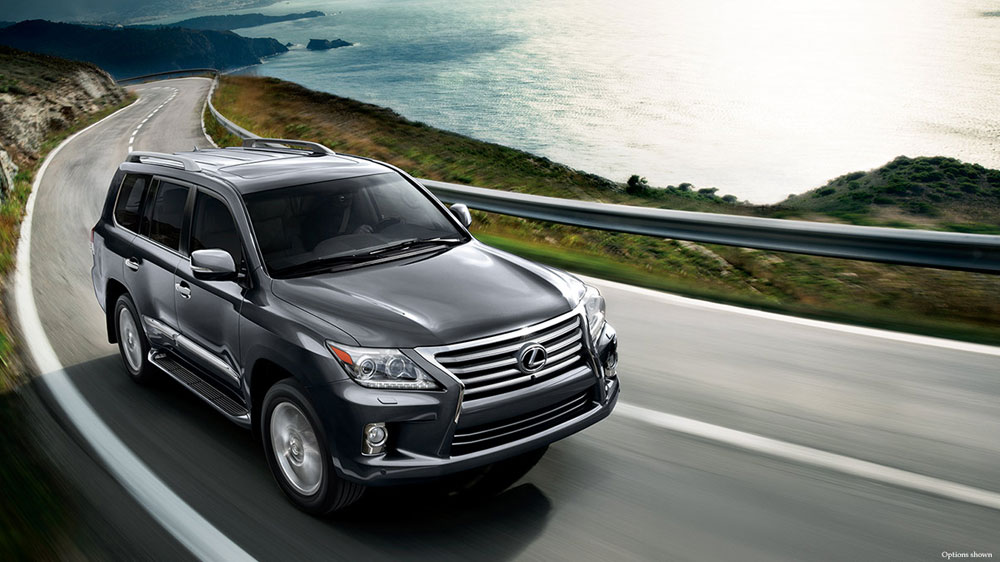 Hans Greimel from the Automotive News has further details on what we might see from Lexus in 2015:

For its next big leap, Lexus will do as the Germans do: Expand the lineup with more iterations of existing nameplates, including hybrids, sporty trims and high-performance variants.

This year, as many as nine updates will debut, including the GS F performance edition of the GS sedan, unveiled at the Detroit auto show. That will be followed by a redesign of the brand’s No. 1 nameplate, the RX crossover, and midcycle changes for the GS and ES sedans and LX SUV.

Lexus also will deploy its turbocharged 2.0-liter engine to other nameplates beyond the NX compact crossover, which last year was the first Lexus to get a turbo powerplant.

No big surprise with the GS, ES, and RX, but Lexus updating the LX is something new — while the LX exterior could use some minor tweaks, it’s the interior of the flagship SUV that needs the real attention.

There’s an interesting angle on the LX as well — according to a 2013 report from the Nikkei Japanese newspaper, the plan was for Toyota to release a hybrid Land Cruiser this year. Could a hybrid LX be in the works for the 2016 model year?

While in the USA the LX remains a niche vehicle, in the Middle East they sold I think a whopping 20k previously. So internationally its a huge seller. I hope more than another refresh happens as Range Rover is on a tear. I just sat in the new Infiniti QX80 "Limited" and its a whopping 90 grand and seems very well done.

Infiniti are just plasticy Nissans that want to be luxury cars, Lexus is the only true Japanese luxury car.
That's quite a narrow-minded way to look at things. I have a QX80 Limited in my family, as well as the LX570 and 200 Land Cruiser V8 (4.5D). All have 3 have their pros and cons.
I think I exaggerated there, sorry. I just have strong opinions for certain car manufacturers and I personally stand by Lexus/Toyota and have the mind set that anything besides that is junk, I'm a bit judgmental.
I drove a QX80 on a business trip. I'm not impress with any aspect of the QX80. It's a big SUV and it feels like it behind the wheels. The LX570 on the other hand, looks big on the outside but drives like a smaller SUV; more like the GX. It just feels like I'm driving an over dressed Armada with an tad bit more sound deadening. The interior is nice but very busy.

update? UPDATE? NOOOOOO Lexus we want a full redesign for the LX. :/

Agreed! Let's get a whole new SUV! The best one EVER!
YES! Honestly, I find it still more attractive than the new Escalade. A new one would make it even better. I know Lexus could do it. I fear that an update is their way of giving it one last chance before it dies off. :/
It ain't gotta happen cause there's no new gen plan for his younger brother Toyota land criuser
How do you know that? Not that I wanted to even comment, but design clinics were being done in spring 2014 on three Land Cruiser 300 design proposals. The winning proposal would've been frozen a few months ago and be no less than 2 years out as a production model in late 2016-17. The 200 might be replaced in 2016-17, that type of design clinic is done during the first half of development and Toyota spends at least 5-6 years on such a model.
I agree with you, as it is time. They should just do a minor refresh for 2016 and full redesign for MY2018. Doing a heavy facelift, just prolongs the LX life-cycle by 3-4 years. This is basically a 2004 design, which is almost 11 years old.
Yeh, like what i said to Jason above^ I fear that this is just the LX's last chance before it dies off.

Update? well........that would be very disappointing. I thought next gen LX is coming as 2016 model. MB GL just came out totally redesigned, though Lex would do the same.

Actually, the X166 GLS is coming out very soon and basically a facelift GL X166. I have to wonder if the Land Cruiser and LX are going their separate ways?

Toyota = Ferrari: Milking till last drop.
I can't wait to see the updated LX.
What the hell, another update? didn't they update the LX recently with the new spindle and the LED's and the back tail lights? Time for a NEW LX, thanks Lexus.
You don't have to radically redesign a product every 4-7 years when you've already engineered an excellent product. Take a look at the Mercedes G-Wagen.

The LX is not a Geländewagen (and will never be), as Toyota did not decide to just simply refresh the J80 LX450 body over and over again, only adding new powertrains. It's a model that needs to remain contemporary as possible. It is 7 years old now and if a major refresh/facelift happens this year, it negates a redesign in late 2016-17. Just as the 40-Series LS facelift negated a 5LS redesign in 2013-14 to now late 2016. The current LS will be 10 years old upon redesign.
The Land Cruiser is definitely an iconic automobile, in a similar fashion to the G-Wagen. Of course they will redesign it at some point in the near future. However I don't buy that a platform needs to be refreshed as often as possible to stay "contemporary." The GS is fairly new, yet its sales aren't as great just a couple years out. Any sales boosts from releasing an all-new model are generally short-lived for any vehicle that isn't bread-and-butter. You engineer a good platform to start with that withstands the test of time, and you end up with a product that can go through a few minor tweaks every couple of years. The Mercedes SL R129 platform was in production for the entire decade of the 90s. Not only does this demonstrate the longevity of a particular product, but it is also more cost-effective from a business standpoint.
The G-Class has not been redesigned since 1990, unlike how the Land Cruiser has in 1997-98 and 2007. The Land Cruiser is not considered iconic enough to last beyond its typical life-cycle, otherwise the LX570 would be a heavily reskinned UZJ100 LX470, You are correct on that regarding "business standpoint", as the expense of developing the R129 SL intermittently between 1972 to 1977 and 1984-1989, required extreme ROI. Besides that, its predecessor lasted 18 years. The R230 that replaced it barely began development in 1994-95 (June 16, 1997 styling freeze) for a 2000 launch, which became late 2001-early 2002. There are many excellent ways to redesign a vehicle and retain the same platform. The W222 S-Class, 2010 Jaguar XJ (X351), and 2009-10 RX (AL10) are excellent examples of that. The 2015 Camry (great MMC facelift) was not nor was the 2013 LS. The LX changes cannot be like that outside of 2015-17. I do not like this news of "redesign", as sounds like it might be half-done. Keeping the same body and just redoing the front and rear for a faux redesign, for another 4-5 years isn't enough. I honestly prefer a minor refresh this year and full redesign/replacement by late 2017 (2007-2017). It is a large family vehicle, while the W463 (I once also owned) is not and is 25 years old already, with plenty shared with its 36 year old W460 ancestor. The URJ200 LX today is unrelated to the J80 version from 1995-97, so it isn't immune to failing to stand the test of time as an incumbent model. Toyota didn't believe that with the previous two generations, so not so much with the 200 either.

The Problem in some markets the LX570 and Land Cruiser look absolutely the same SUV but with diffirent badges Lexus needs to break away from the Land Cruiser exterior and start a completely new Design and beef up the V8 Engine to be more Dynamic.

I get so confused! I see so many Land Cruisers from the Middle East on the internet with LX taillights, LX door moldings, LX wheels, and LX rear bumper! There might be even more that I have not noticed! In many instances, it seems to me that it is the dealers who are making those upgrades in the same way Benz badges were put on Dodge Sprinter vans.
That's even worse

The LX will be an all new model. I was lucky enough to go to an event where Lexus showed pictures of the new RX and LX. They both look stunning inside and out. :)

So is this something along the lines of the 2013 LS? Not an all new generation from the ground up but a big update enough to keep it going a few more years and they could market it as ALL-NEW? Will it be unveiled in any of the motor shows anytime soon?
From what I understand it is an all new model
Thank you for insight again, but they've recently said similar about two Toyota models of theirs (if not another). The 2016 Tacoma and 2015 Camry (facelift). One can do a lot with sheet metal and marketing personnel to fool onlookers into believing it's "all-new". Platform likely has not changed.
Are you sure? I understand Wad's point, as there have been no prototypes anywhere. The 40-Series LS III facelift was teased in January 2012, first spotted as a prototype in May 2012, unveiled in late July, and launched in October 2012. This might follow the same template. Thank you for your insight, but I personally feel it's along those lines. The next Land Cruiser was barely in the design process last spring and would've finished styling several months later in late 2014, being due 2-3 years later. There have been no plans for a new Land Cruiser, outside of the late 2016-2017 time frame. If the LX is updated by itself, it is very clear that both are going their separate ways and that the 300 Series Land Cruiser will arrive by itself in late 2016, with a ground-up LX successor well after that.

I have believe there is a chance of a diesel version of the LX for international markets, using a version of the 4.5l twin turbo V8 used in the Land Cruiser.

Hi All, here is few pictures I saw on Clublexus forum of the new RX. For those who saw the RX, is this is?

Sorry for the typos... Going too fast :)
Yes, UZJ100GXR posted that for us on Club Lexus. I thank him for finding that render (Lexus would cease and desist).
That side window is a huge no for me! But that is a NICE spindle grille! A part of me still feels like this is just a render though.

I have been in a lx before they are pretty nice they are expensive but worth it. personally I think the infiniti qx80 is just a wanna be their trying to be like the lx but the lx is much nicer and not as thick looking