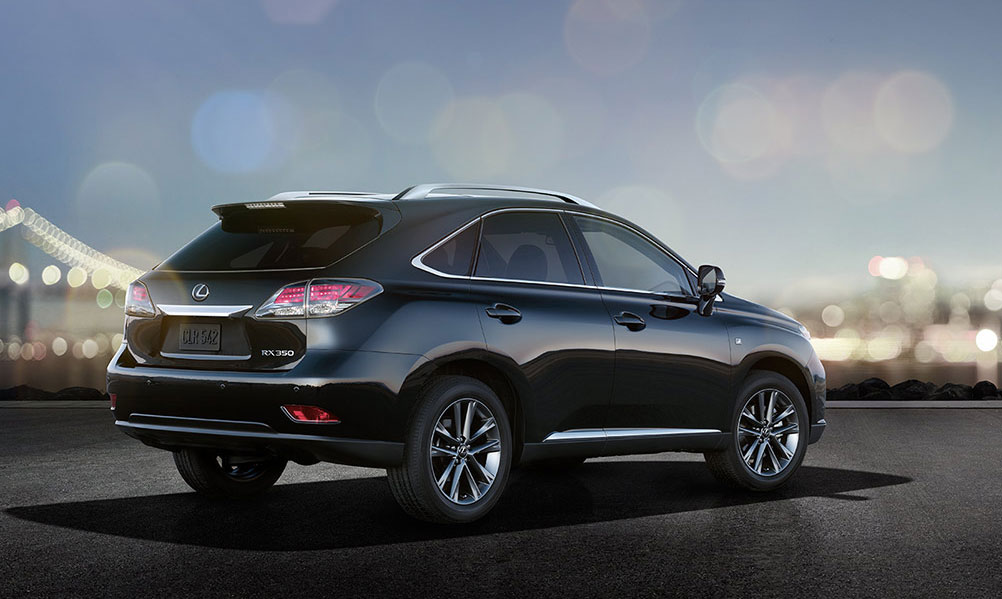 Edmunds has now confirmed that the next-generation Lexus RX will be revealed at the New York Auto Show in April:

The RX 350 is expected to be larger, a strategy that will separate it in terms of size and price from the recently introduced 2015 Lexus NX 200t SUV, which shares a platform with the smaller Toyota RAV4.

Car shoppers should expect the redesigned RX 350 to use an extensive amount of lightweight materials to boost fuel economy. It will continue to share a platform with the Toyota Camry and Toyota Avalon, industry sources said.

The RX 350 may be stretched a bit to accommodate a third-row seat, but Lexus has not confirmed whether seven-passenger seating will be offered. The model has been a five-seater since its inception in 1998.

Just two weeks ago, Edmunds reported that the next-gen RX would debut at this week’s Detroit Auto Show, which obviously didn’t happen — however, an NYC reveal makes a lot of sense in terms of venue and timing.

There’s not much substance in the rest of the rumor — the RX may or may not be stretched, it may have seven seats or it might not. The good news is that the New York Auto Show is fast approaching, and there’s bound to be more information shortly.

This is going to be interesting. The anticipation is building and hopefully it won't be disappointing; seeing the direction Lexus is headed I don't expect to be. Can't wait to see it!
You know what is utterly mind-blowing? The RX 300 debuted in 1999 pretty much by itself, the truck based ML was there too. Clearly it was the segment, sales leader. The 2nd gen came and by then the field was getting more crowded. The third gen had an even more competitive segment and now 5-6 years later the RX segment is as competitive as anything we have seen. Amazingly the RX continues to sell better than ever. It really is a good news story and one showing it is a class leading product. The next generation I'm sure will add quite a bit of technology and maybe an even sportier F-sport. 7 seats? Who knows!

Only in NA and not too bad in CEE. Here in Western Europe, it doesn't sell even half of Cayenne.
Sells more than Cayenne for sure in europe lol. You see a cayenne maybe twice in a month. The RX twice in a week
Actually the Cayenne (and now Macan) alone sells almost as many as the full Lexus line up
Amazing statistics you have there, LOL. Lots of stupid People on this blog ...
Let's not go there please. No reason to call people stupid for disagreeing with their opinion.

I love the looks of the current generation RX with the updated lights, please don't screw it up Lexus!
Considering the heavily camo prototype pictures, I doubt that the next RX will be 7 seater. Which is no big deal. Cause I believe the next GX replacement will no longer share with Landcruiser Prado platform (Body on frame) Should be expected to be uni-body like the RX but longer wheelbase to properly accomodate 7 seater? But of course this is my guess.
Honestly, I don't know what people sees in the RX styling: The stance from the rear makes it look like its going to tip over; the profile has the ugly rear window; the front looks like a catfish with the spindle grille. I hope the new one changes that.

They must see something . . . 100,000 annual sales on a model beginning its sixth year. Drive one; you might change your mind. Can't wait to see and drive the new model. I just hope the styling is commensurate with the taste of those of us who have driven them since the beginning.

And here she is, or almost: http://toyota.jp/harrier/003_p_001/exterior/three-d/flashpc/index.html

The Harrier has nothing to do with the RX! The RX will definitely not look like this.
Bingo. Body and window lines match perfectly with the camo'd prototypes. In Ginza this year, I actually mistook one for an RX.
Exactly. Of course many details will change, but doors, windows are exactly the same on the prototype and Harrier.