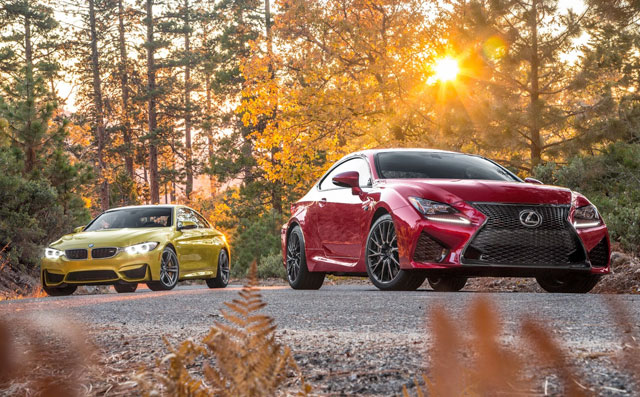 Motor Trend has published a comparison between the Lexus RC F & BMW M4, and it’s a total mess of conflicting information:

We preferred the Lexus around town, as it’s a more interesting car to sit in thanks to its wealth of technical and visual details. The styling may be a large miss, but we admire the effort. And we were genuinely impressed with the ground the RC F made up on the racetrack. It offers performance similar to the M4’s, but it feels friendlier.

Alas, we picked the M4 when it came down to the car we’d rather take home. Its engine lacks the Lexus’ aural satisfaction, but its powerband over-delivers. Its suspension works excellently on a bumpy racetrack and isn’t exceptionally rough on normal roads. Overall, it offers a higher performance envelope than the Lexus, and while it might take more time to get accustomed to, we found more engagement and satisfaction in the process.

Let’s see — the RC F is easier to drive, handles better on public roads (where 99% of all owners will drive), costs $10,000 USD less, has better technology and a more impressive cabin. On the other hand, the BMW has a powerband that “over-delivers” and “offers a higher performance envelope”.

How does the M4’s “higher performance envelope” over-deliver? By returning a track time just .32 seconds faster than the RC F: 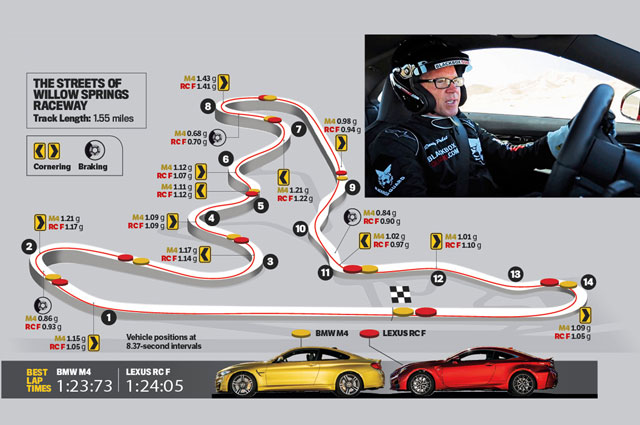 The M4 performs (marginally) better than the RC F on the track, it’s right there in the numbers. The testing is not the issue.

No, the issue is that a major automotive magazine has decided that a half-second and subjective opinions are worth more to their readers than near-identical performance, $10,000, and better everyday driving comfort, technology and utility.

curious to see if any of the mags will run a comparo without the carbon brakes. since it will be more of a true comparison cost wise. how many people will actually buy that upgrade anyway? will the RCF come out on top on the track with that comparo? hmmmmmm
They chose the M4 because most Americans who know nth about cars hate Lexus for creating luxurious cars that KO-ed their beloved Lincoln and Cadillac. So these people here in MT dare not go against the majority crowd and pick the RC-F although I bet they loved it. Imagine how the American readers would react when they find out a Lexus had just defeated a BMW sports car. Forgive these gutless people.
Typical Motor Junk.

No wonder they are begging people to subscribe their mags.
I have been subscribing for a couple of years...for free! nice to have something to read in the bathroom

Because motor trend is bmw biased

Which is why the GS won the last comparison. Please. You're all sounding like the butthurt whining BMW fans from *that* comparison.

Wow, Krew. I have never seen you write so passionately, and that is not to say that your writing lacks passion. However, the ending was rather sincere and direct. I like that!
I think they are afraid to admit that Lex is just a better choice.
But the Lexus is seriously ugly

Even if that may be the case, a car comparison should never be based on (subjective) looks. MT obviously factored that into the decision.
R U MAD?

I gotta agree with Motor Trend on this one. Lexus dropped the ball slightly by making it so heavy. Without the need for engineering for a convertible version anymore, the next RC could be well worth it.

The fact that we are even talking about a Lexus coupe being almost equal (or maybe even better) to a BMW M4 is amazing. It shows how far they have come as a producer of performance vehicles in quite a short time. At this rate of improvement they will overtake their German competitors very soon.
The fact that it is heavy still makes it deliver a very good performance, and what if RC F is lighter? It might eat the M4 alive.

These biased comparos in favor of BMW have been taking place since the late 90's. I have had subscriptions to the big three (MT, Road & Track, Car and Driver) since then and have noticed how they almost always do this to Toyota and Lexus; even in this case when this car is imho clearly the better value than the BMW. If it were an American or German brand it would have won, given the same variables. I am now convinced that they are scared of Toyota beating the americans and germans on all fronts, openly; which they still are. Now that im older, it is clear how and why, they are fudging the results. Oh well, thank God for the internet and other unbiased sources of information like the AMCI test which clearly shows which car is better, performance wise. We don't have to depend on these dinosaur, bought out print mags anymore for objective material; cause clearly we aren't gonna get that anytime soon. PS - Lol who wants to bet when the next M4 comes out, how they will be saying how hard this one was to control, sound sucked, or otherwise. They only tell the flaws when the new one comes out.

Yes, and the last gen Toyota Camry beat out the Porsche 911 to win Car of the Year
someone who worked for AMCI testing "I did driving events on racetracks and vip events where you let the invited vips drive the cars. Obviously, you're supposed to explain why Audi's S8 is so good and why the rest is not good. I stated everything objectively which the customer appreciates much more than the "All hail my brand" fanatic marketing bullshit. The events are always done extremely well and luxurious - no expenses are spared."

"The styling may be a large miss" Seriously Motor Trend? Many people likes the very aggressive spindle grille compared to that boring front end of M4, especially the very striking rear of RC F. Motor Trend really hates Lexus with all of their reviews.

If styling is a big factor in their ranking, then they should include reliability/cost of ownership too.
In the automotive media, those things don't matter, especially when it comes to luxury vehicles. Since 95% of them are leased, and they won't be subject to maintenance bills. That's "America".

BIAS is written all over that article. The main points Krew makes (btw Krew, I preordered my NX yesterday; YEAH!)...anyhoo, the main points he makes regarding what MT says about how the Lexus is better in almost every other point, that a normal non-test driving, helmet wearing consumer would consider, I think is what should be looked at. Lexus IS a Luxury car first and foremost. Not a 21 - 45 year old racing/performance nuts vehicle. I also think it's a beautiful vehicle as well. Oh, that last comment was bias...

Hope to see another comparison of RC F now with the new ATS-V Coupe.
@krew Since you're not familiar with racing, it's worth pointing out that on a short track such as Willow Springs (only 1.55 miles), 3/10ths of a second is a sizeable difference. Longer tracks, such as the F1 circuit in Austin (3.4 miles), will show a much larger gap of several seconds or more. A large number of M4 owners do track their cars, and while the cheaper RC F is good car on its own, for a daily driver/weekend racer, the M4 is a better car.