END_OF_DOCUMENT_TOKEN_TO_BE_REPLACED " /> The Truth About the Cancelled Lexus RC Press Event in Japan | Lexus Enthusiast
Menu
Log in
Register
You are using an out of date browser. It may not display this or other websites correctly.
You should upgrade or use an alternative browser.

The Truth About the Cancelled Lexus RC Press Event in Japan

Last week, Hans Greimel from Automotive News reported that a Lexus RC press event in Japan was cancelled due to lack of interest:

The drive, which was to be held Friday in Yokohama just south of Tokyo, “has been canceled due to insufficient attendance,” Toyota said in an apologetic email to non-Japanese media based in Japan.

Toyota public relations was stunned. A baffled spokesman said it was just one more sickening example of the auto-alienation syndrome gripping this country and its young.

This story was subsequently picked up everywhere from Autoblog to Jalopnik, despite the fact that an important detail was left out — the only cancelled part of the RC event was for business and foreign press, which had originally been added due to high demand from Japanese automotive journalists. 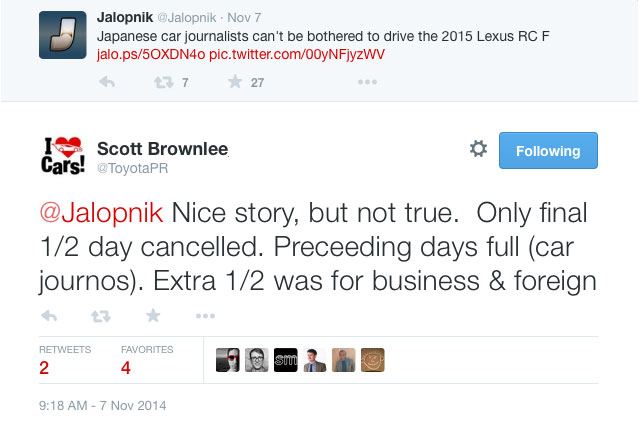 In the end, it was the lack of interest shown by business & foreign journalists that cancelled the event, and not some larger indicator that the Japanese public do not care about Lexus or cars in general.

This is what happens when you give the story to the news channels, they run and add their .02 cents in it too.
It is very frustrating to see this type of journalism continue, solely to troll and get views. It was pretty obvious to me that there was more to this story than initially told. I'm glad Scott was able to post the truth. The thing is in this day and age when news is spread quickly, it is more important than ever to get things right the first time. I assure you that the update from Scott won't be posted much compared to the initial news.
Hans G. is usually a very reputable journalist from AN, which is the extreme end of "those guys" at Jalopnik, but he was the one that dropped the ball on this one.
Driving the NX 450h+