END_OF_DOCUMENT_TOKEN_TO_BE_REPLACED " /> Photos: New Lexus GS F Prototype Spotted in Europe! | Lexus Enthusiast
Menu
Log in
Register
You are using an out of date browser. It may not display this or other websites correctly.
You should upgrade or use an alternative browser.

A new Lexus GS F prototype has been spotted in Europe — here are some photos from World Car Fans: 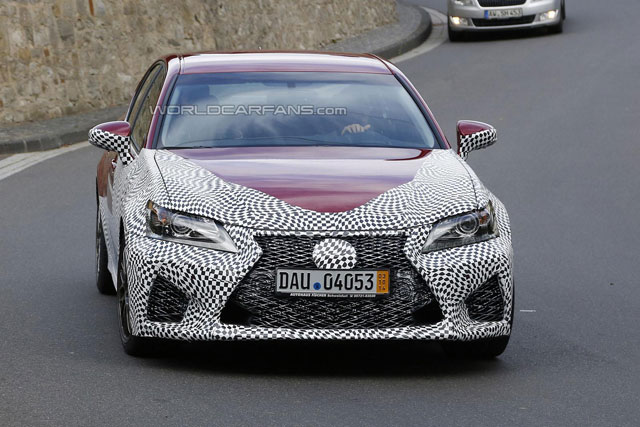 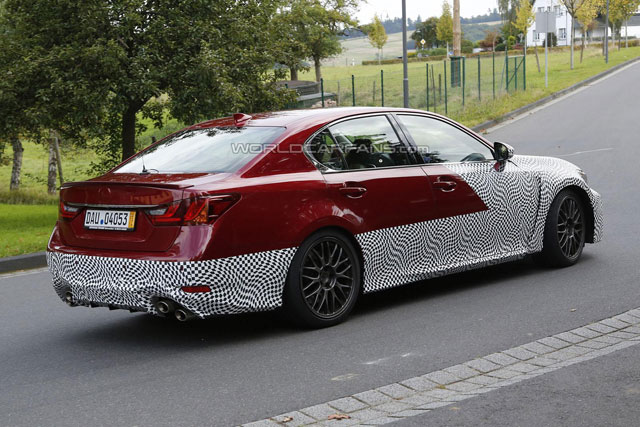 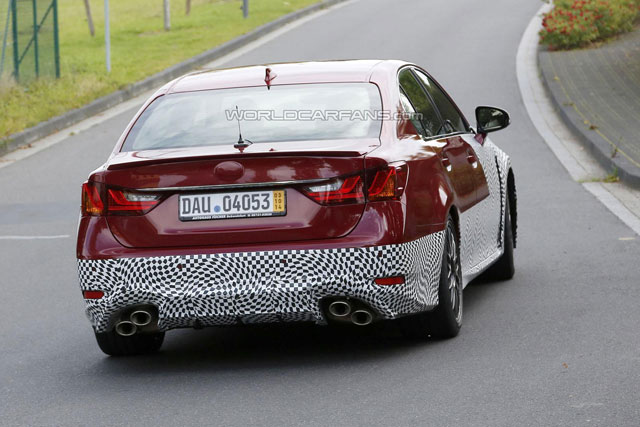 Very clearly, the GS F will be heavily influenced by the new RC F — the front end is near identical with the integrated oil cooler & engine cooler vents: 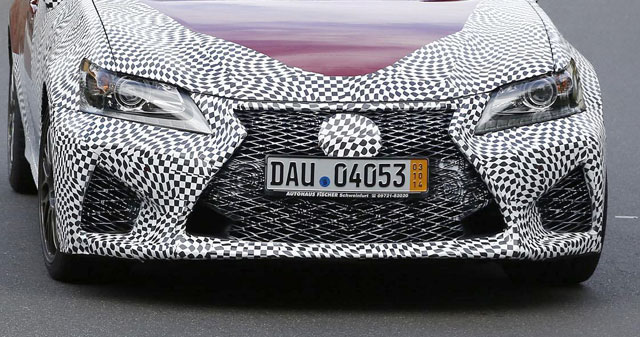 On the side, there’s the very well-hidden signature F vents in the front fender: 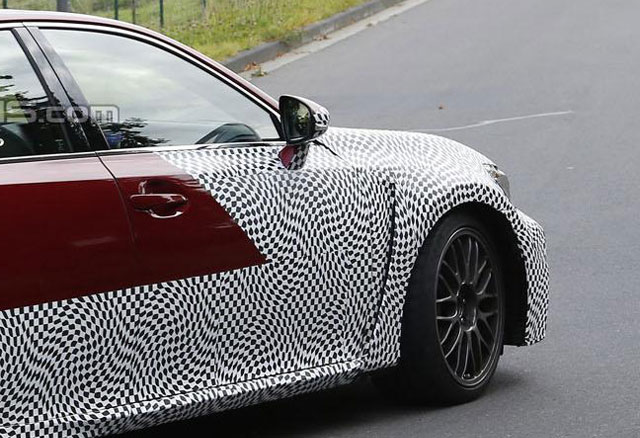 Around back are the stacked quad-exhausts: 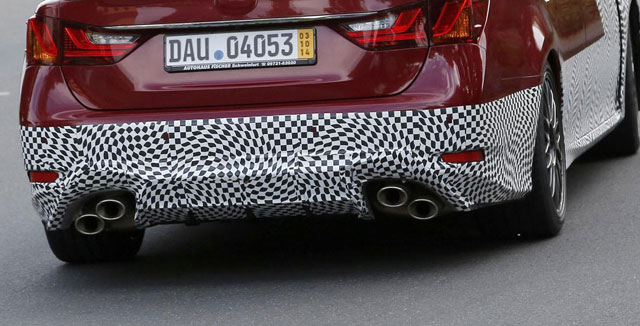 The GS F will likely debut with a mid-cycle GS refresh, and this model is clearly the current design — can you imagine this GS F with the tri-L LED headlights and RC F influenced taillights? Just awesome.

lol mistake? mybe you are the mistake not the RCF
the RC-F did disappoint a bit, it should of been lighter you cant argue with that, i am not saying its not good but i expected more....
abed is right that the RC F could be lighter. Compared to the IS F it doesn't benefit from its extra power at least in straight line acceleration ... However, on track they r supposed to be totally different cars
i am with you, but if you make a car just to be better than your old one its not enough...you have to change how people think about lexus....

I kinda like it that the LED Daytime Running Lights are still connected to the headlights, something that can separate it from RC F. Still, I'm excited to see this! Something to look forward to in Lexus' 25th year. :)
So ... Lexus PLEASE make it BETTER then the M5, E63 & RS6 or RS7 That WOULD BE JUST A DREAM FOR ME!! PLEASE SHOW ARABS how to SPEND THE MONEY in the RIGHT CAR :p

If its only got the rumored/reported 500hp then it wont be "better" or at least faster than the Germans unless its superlight but thats impossible since its the same gen GS.
but the GS is already the lightest in its class, no?

I think I like the LED DRLs connected to the headlight better; still love the RCF look though. Anyways, I am now beyond excited for this!
get rid of those amber/orange turn signals!!! please don't include the vanilla gauges
Something to brighten my day up! Thank you krew for this site, don't know what I'd be doing without your posts. Even though I won't be able to buy this, I'm really glad that Lexus is going in the right direction. Next should be the second generation IS F, merc and bmw got nothing on Lexus!
I like it. But I really hope they give the body a more masculine look with body lines and instead of bi-xenon daytime they should make it true xenon like what's on the LS.over all cannot wait. Been waiting for a GS F! Just hope the rumored power trains are false
Just a complaint about the regular 4GS and possibly this, the halogen turn signals really seem cheap to me. I love the LS turn signals (they're LED) and I hope they replace these with LED's on the GS in its mid-cycle refresh. It's just not premium at all...
It has the RCF seats upfront sick

Yes baby yes!! I hope the front is gonna be more aggressive than the RC F. I can't wait for the official release!!!
Truly exciting stuff! Can't wait. But...to my eyes (personal opinion, feel free to object). the spindle grille doesn't suit the GS. I reckon the body is a little too modest for the aggressive front-end. There's a slight lack of cohesion.

I somewhat agree with you, not sure if it should be bolder or....I don't know!
Yea it looks like the grill from the RCFsport not the grill on the RCF. The Lexus emblem on the RCF has more space between the top of the grill to the emblem in the middle. It's just a prototype can't wait to see the final product. Hopefully LFA tachometer as well might have to hold off on the RCF damn u lexus
You are so right . . . body too modest for aggressive front end. NX was designed from the grille back producing the cohesive look. Wonder how the refreshed GS grille will look in comparison to this GS F grille?

Awesome! Just keep it simple. Don't over kill the design. IS-F and RC-F are designed to attract younger enthusiasts. This car is supposed to be a sporty, luxury, more conservative, executive car. Looks great right now.

Couldn't agree more. Simple is better. Hopefully refreshed base GS spindle grille will be more restrained to yield a more cohesive overall design. There are still some of us who want more than an ES, but without the total bad-a** look. We have no desire to go to the track . . . but we do want sporty luxury. Don't forget us Lexus, please. Words in the wind . . . everything is sealed by now.

I'm pretty sure that front end is straight off the RCF. They did something similar when the RCF was a prototype, they used the GS's taillights. Hopefully if I'm right they'll change that front end to look distinguishable from the RCF and base GS. They're probably doing this to test the aerodynamics and air intake and cooling system. It'll need more work though. Maybe a taller bonnet/hood, beefier fenders, lower bumper clearance, etc. It should be light; the GS platform is the lightest in it's class. But overall I'm pretty excited for this thing. Been awaiting it since the ISF debuted.
oh ok, someone else tipped from this article too besides me...well anyway good its now posted here
Hell yeah!!!!!!
Should be a performance hybrid With very low emissions. If not; nothing to Write home about.
I think the front grille is better than that on the RCF - it is better proportioned not so wide across the base. I do agree that Lexus have to make this car better and faster than the opposition otherwise why bother with a halo model.

It's not a "halo" model ...
Whatever - it is the top model of the GS range and will sell in much smaller numbers than the standard range of GS and therefore must be special.

Hope that there is an FS version to come out as well... The twin-turbo version would just kill anything from Germany ...
1. The grille still seems too small. It needs to be more Lexus awesome, and tie-in with the rest of the lineup. 2. Asking for turbos on the 5.0, which should bring it to 600HP or so. Then it's ready for war! And that engine can also go into the next Lexus LS/LSF. I believe the next LS in 2016 will get the 5.0 (Lexus LS500), detuned to 440-450HP, but with more torque. Then get a turbo option in the future LSF, in the 600 HP range. BD
The F-marque needs a new "family engine" like what BMW, Audi and Merc are doing. It's indeed costly to build a new engine, so why not take the current 2GR-FSE (V6 3.5L) or the 5.0L V8 on the RC-F and put a pair of turbochargers inside? F models with such engine would fly off the shelves as well as the starting line!
Lexus please try not to make it hideous looking..
The GSF is super cool the only thing i dislike the fact that the rear end doesnt have a big difference from the normal GS come on Lexus u can make a new Rear bumber and bigger QUAD exhausts
GS F aside. This just struck me. Would the facelifted version of the GS F-Sport look a tad like the LF-Gh concept? The full mesh spindle grille on that looked amazing. Hope that would translate into a production product. I remember being bitterly disappointed when the Lexus didn't give the 4th-gen GS the full spindle treatment.
Driving the NX 450h+