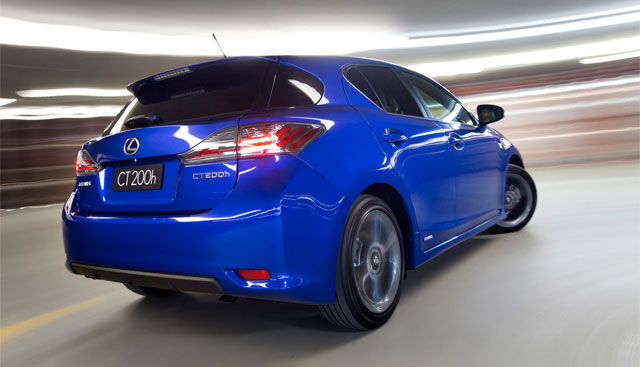 “He is not interested in building with front-wheel drive configuration,” [Yaguchi-san’s] interpreter told motoring.com.au.

Asked if F could develop an all-wheel drive version Yaguchi replied via his interpreter: “Basically they have to consider taking whatever is available in the production unit, or baseline unit. So if you are going to build something smaller then it is going to require having a brand-new architecture.”

There also doesn’t appear to be much hope of a high-performance SUV in the near future:

“To have an F badge, the car needs to have characteristics to be able to run on track and on race course,” he explained. “Therefore it doesn’t really suit to have an SUV as an F model. There may be an F Sports SUV (there are already – ED), but as far as F models go, no plans.”

With only so many resources to go around, there are models in the Lexus lineup that are better suited to F high-performance models — until a IS F, GS F, & LS F are in production, a CT F or NX F shouldn’t be considered.

(For starters, let’s see the 2.0L turbo engine in the CT first.)

I'd say, possibly the next CT generation may just have an F model derivative, not the current gen.
I totally agree with eh Cheif engineering... I mean considering a front wheel drive as an sport will be the worst idea for Lexus ... But I loved the idea of Lexus CT200h TURBO (300HP) that was tuned by (FOX Marketing) .... Which made me think it might be the best comparison between this TURBO Lexus CT200h & Volkswagen Golf R ... It was just an idea ... Overall I still respect the idea of Chief engineering Yukihiko Yaguchi Cause it makes sense

Yeah I remember this car, that was an hot hatch with balls (albeit a bit too much in the body tuning, it should be toned down for a production model), actually I'd like to see an hot hatch CT cause I've always liked these kind of cars since I saw the Honda Civic V-Tec for the very first time in the 1992. Really stupid the idea of an high performance SUV instead cause it's a type of car that is not made for that, only germans do those useless things but they don't make huge numbers with them, it's just for to have an image-model for the entire range of that specific SUV but the reality is that they sell almost exclusively the normal non high-performance versions.

If Lexus is going to offer a smaller F model, it would be great to see it based on the Toyota 86 chassis.
I don't see a CT-F as a great option. But added engine options are always welcome.
CT 200t, 300t and NX 300t should be sufficient enough for now.
They should put a turbocharged engine on the CT first before they take it into consideration on an F variant. CT is just so boring to drive!

No no, it's extremely pleasant to drive in the caotic traffic of Rome and on the awful ring all around Rome called "Raccordo Anulare": it's the best car to drive in these kind of places, beside any Toyota or Lexus Hybrid as a matter of fact you can see tons of hybrids in Rome an they are getting ever popular.