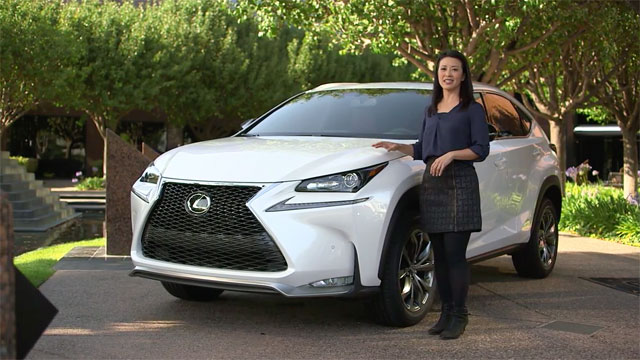 For anyone looking at purchasing a Lexus NX in the USA, this two-part video with Ming-Jou Chen of Lexus College is an excellent overview of the new crossover:

(The new door handle is a real improvement over the current design — very stylish and functional. Look forward to seeing it on other models.)

If I had to choose one word to describe these marketing videos it would be vapid. Do I really "NEED" to now that the NX's design is "aggressive?" Seriously, as much as I love Lexus, their marketing stuff is just the worst. Ironically, there was one piece of information that I got from the first video which I thought was the most important (and new) piece of information so far: the Hybrid NX will take regular gas. Hopefully that is the truth and not an error amidst all these platitudes about the "attitude" of the car. I mean really, when I get in the car, is it going to cop some of this said "attitude" and refuse to take me to my destination? The other thing which I was disappointed to see is that the 360 cam was NOT included in this video. So I guess it is almost official: Lexus decided to remove ALL of the things which I thought made the NX cooler than any other crossover: 1. Panoramic Sunroof 2. HUD 3. 360 backup cam

Unfortunately yes for the US market. HUD and AVS are available in Canada on the Executive package on the non-F-Sport or Series 2 package on the F-Sport. I would like to see a more detailed explanation or review on AVS.
It's "agressive", it's "bold", it's getting a bit old. I agree.