END_OF_DOCUMENT_TOKEN_TO_BE_REPLACED " /> Video: Lexus RC F on the Track | Lexus Enthusiast
Menu
Log in
Register
You are using an out of date browser. It may not display this or other websites correctly.
You should upgrade or use an alternative browser. 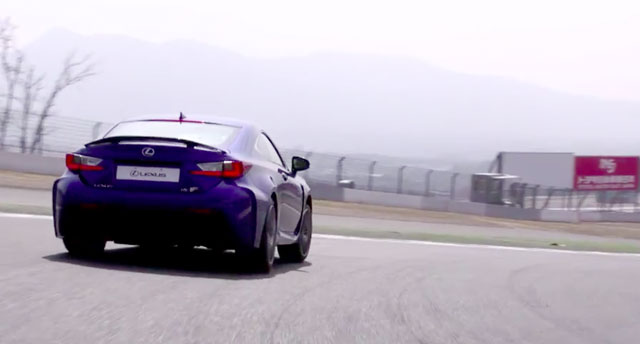 There’s a new video interview with Lexus RC F chief engineer Yukihiko Yaguchi, and it features some excellent footage of the RC F on the track:

Right from the release of the IS F, it’s been clear that Yaguchi-san had a plan for Lexus performance — excited to see how that vision presents itself with the new RC F.

Not even a startup to hear that exhaust note? Come on Guys. BTW, Lexus was never planning on putting those fancy L shaped bulbs in the production model, the prototype in the video has regular circular bulbs.

The production model will definitely have the L shaped LEDs which Lexus are clearly using as a brand motif. The projectors that are used in the video will be standard and the LEDs will be an option which was confirmed on the marketing brochures that interested customers have been sent. They've shown the LEDs on almost every showcar not just for the RC but for the NX as well. It's the way forward for Lexus' design.
see also: http://lexusenthusiast.com/2014/05/20/new-lexus-rc-f-wheel-design-debuts-madrid/

When the engineer says the track times and speed at the Nurburgring was not the priority (but instead overall driving enjoyment), this worries me for the coveted 0-60mph times and bragging rights. To beat an M4, the F must be comfortably below 4 seconds close to the LFA. For me, it's about overall feel, but the competition will always brag their car is faster.

Yes, bragging rights is quite important, but remember not all driver who drives the RCF drives or lives on a straight line all the time. For me, driver enjoyment is a must, this translates to everything! Just my cents :D
0-60 mph is only an internet bragging number. It is only a measure of traction and how quick car can start. It is only a starting point. Acceleration beyond the 60 mph is far more usable on the roads since 90% of the time one accelerates from a rolling start. You mentioned RC-F getting close to the LFA. Even if the 0 - 60 mph is say, 3.9 seconds, it would be nowhere anywhere close to the LFA after 60 mph. You should check the drag race of LFA and CCS-R IS-F (that weighs only 3200 lbs and makes 455 hp). Lexus LFA leaves the CCS-R like it was standing still and simply vanishes into the horizon.
Well, if you look at the "King" in this class, that has always been the benchmark, it never was about numbers, it never was the fastest. It was really only about driving enjoyment. The "numbers" car was the M5, "a wolf in sheep's clothing". That one had huge HP numbers, fast acceleration numbers etc. The new M3/M4 is a completely different car, a good one, but it has little to do with the previous generation. Ben Barry from Car Magazine: "The M4 is a great car to drive but it feels built to hit numbers rather than to push a driver's buttons." This is not a something you expect from an M3, but more from an Audi RS or Mercedes AMG. Anyway, when we compare the first IS F vs. M3 to the last IS F vs. M3, the is a huge improvement from Lexus' part, the IS F is on par to say the least, with the M3. The IS F was Lexus first attempt, and a very good one for being the first time, I have little doubt the new RC F can beat the M3/M4 even in numbers.

I still wanna know exactly how much kW it produces.. It's gone be a really thrilling ride I suppose ..