END_OF_DOCUMENT_TOKEN_TO_BE_REPLACED " /> BEYOND Article: The RC F Performance Path | Lexus Enthusiast
Menu
Log in
Register
You are using an out of date browser. It may not display this or other websites correctly.
You should upgrade or use an alternative browser. 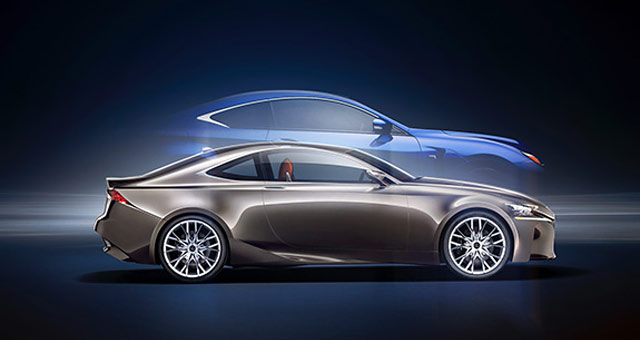 The latest issue of Lexus BEYOND Magazine arrived in the mail today, and I’m proud to announce that I have a story in the USA edition.

It’s the article on how previous Lexus performance models influenced the RC F super-coupe — the Lexus Drivers website has the full text online:

Despite its implied adrenaline-charging sensibilities, the Lexus RC F isn’t simply a super-powered version of the RC coupe. Rather, it’s a significant milestone in the ongoing Lexus design language—the latest thrust of Lexus’s ongoing commitment to premium performance design.

It’s also a story years in the making, and it starts, in part, with a secret project that begun 10 years ago.

This brings up an interesting question: Whatever happened to the LF-CC? Lexus isn't making an IS Coupe? Has it been confirmed for production? It should be the next IS variant, before any convertibles or ISF.... BD

The LF-CC turned into the RC
Then that's the ugliest transformation in the history.....of transformations. The concept looked epic! The RC is a hot mess in comparison. Why make the concept if it doesn't look an ounce like the production car will look? They share a greenhouse, and that's it. Everything else is different, and uglier..... BD
No. The LF-CC turned into the IS! Maybe clearest visible by the line going from the rear lamps through the rear Wheels.

I don't have it in the Lexus Beyond International edition I got in Canada. Congrats on your story!
For their 25th anniversary actually keep a secret and unveil the GSF and the ISF, that would be amazing!
Guys. To answer your questions: 1. The LF-CC was the concept for the RC. So, yes the LF-CC turned into the RC (including RC 300h, 350, 350 F Sport and RC F). 2. The whole idea behind creating a concept car is to share a platform for the final production. It would be extremely costly for production if the final product was a match to the concept. Overall, I believe that Lexus cars are the closest ever match to their concept forms. This is a direct result of Lexus's new policies towards establishing new emotional designs that would appeal to the modern generations. 3. There will be no IS coupe. The RC serves as the coupe in this segment. This is part of a trend that Audi 1st than BMW is following. Example BMW 3 Series & 4 Series. I beleive that they are following this strategy becuase a coupe usually costs more than a sedan, it is not in terms of raw material, but in terms of sales (less sales higher cost), and it would be illogical to charge more for the same car which is smaller, example Merc C & C Coupe (same goes for the E). Thus, they expanded into a new segment with a car like the RC, later if things turned brighter than expected, they can go for the RC grand coupe.

LF-CC wasnt a concept for the RC. Theres not a single design element in the RC taken from the LF-CC. What would that be?
You are clueless. I dont want to waste my time explaining the basics to you my friend. Please keep your opinion to yourself.
Thomas is correct about the concept. The LF-CC concept previewed the styling of the 2014 IS, albeit in two-door form. This is easily visible in the way the taillights swoop up the side and the shape of the c-pillar (it is significantly more upright than the very sleek RC's and much more in line with the IS's). Also, the trunk lid and rear end are very similar to the production IS. The RC features none of these design cues, with its triangular headlights, extremely wide and low spindle grille, and completely different taillight treatment. You are right about the naming though: the RC is essentially an IS coupe with different sheet metal (the same approach Audi took with its A4 and A5). And as a side note to the people who think the LF-CC looks better than the RC: the RC's design is much more consistent and fitting for a coupe shape (low, wide, and sleek), while the LF-CC was essentially an IS without the rear door (so it was almost too upright and made it look kind of stubby in profile) So the RC is the better designed coupe, as it should be since the LF-CC was really designed to preview a sedan (the IS).
How about the chassis and dimensions? how about the side profile and wheel archs? how about the front grill? the LED lights? how about the coupe nature of the car? I agree with u that some elements belong to the IS but as well as being a platform for the IS it was meant nainly for the RC.
The side profile of the RC looks nothing like the LF-CC. You are totally clueless! :D Spindle of the RC looks nothing like the LF-CC and that goes for the headlights too. There are not a single design element that I can see in the RC that is taken from the LF-CC. And BTW, The (only) concept for the 2IS was a two door roadster/coupe/convertible if that tells you anything.
Man it is a toned down version dedicated for production, Please, just look at the wheels, they are the SAME! For God's sakes, STOP ARGUING
I think there are Wheel options. LOL!
Chap, maybe you're thinking about the LF-LC... on that you have a case
Listen to me and Milli_14. There is no design elements from the LF-CC in the RC. Use Your eyes!
The LF-CC prewied the IS. End of discussion.
From my interview with Lexus International vice-president Mark Templin: Me: You can really see this when you look at the LF-CC, and the way it transitioned into the IS. There were fundamental differences — one was a coupe, one was a sedan — but you can still see a very clear line from the concept to the production model. Mark: You’re making it sound like the LF-CC was a concept for the new IS. The LF-CC has a wider track, a different stance than an IS… Me: (Laughs) Sure — I’m definitely oversimplifying things. Still, there are some very similar lines… Mark: Oh, from a design standpoint, I’ll give that to you. You’re starting to see some consistency across the lineup with a lot of design elements. ---- Bottom line, the LF-CC was a concept for both the IS & RC.

It is not ugly IMO, but different. So I like it, but I also like the IS. Hopefully we'll have an IS F, with flared fenders.
LF-CC was a concept get that already. it looks like a BMW on the sides, on the roof from the windscreen going to the back, is some very wrong propotion. meaning the LF-CC only looks that good because it a concept. RC-F looks distictivly lexus looks way much better then LF-CC
You can be wrong. I'm good with that..... BD