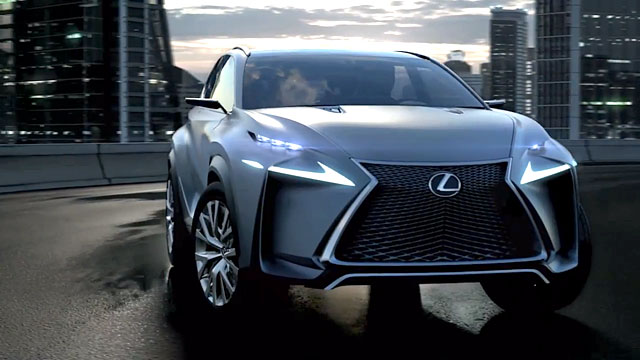 Lexus International has released a must-watch video on the making of the LF-NX crossover concept:

From the swirling 3D effects in the rear taillights to the responsive lighting in the interior, this video reveals plenty of never-seen-before detail to the LF-NX — it also features some early LF-NX design sketches:

Always so interesting to hear the designers describe the thoughts and motivations behind a concept car — a very informative behind-the-scenes video, definitely worth watching.

In the beginning it was way over the top for me. But now it's growing on me. It has a strange effect on how I look at the other concepts at the Frankfurt IAA. They really all seem boring now... F.ex.: in Frankfurt, Jaguar shows the CX17 SUV concept as a competitor to this LF-NX. A beauty imho, with nice style references to the superb F-Type. But it seems so dull after examining the LF-NX over and over again... !
the one and only reason people will not buy it is the engine.. 200h or 300h with CVT is simply not enough, some say too boring; even for SUV, not mentioning a sedan (IS)... lexus is missing 2.5 - 3.0 hybrid engine with turbo and some 300hp which could bring some live in those quite nice piece of design, not only while it's not on the move;)

bold but not beautiful. front half may be interesting but the rear half is overstylized imho.
May be too Dynamite for most. But it's just right for me! Makes other crossovers look old and gay. Go on, with your bad self! BD

Are you the dumbest person on the Internet, or what?
Maybe you are for not releasing design go look at the CX17 people think its nice maybe you will too but other like me is sticking with this NX because its bad ass
My goodness, Thomas -- can I not leave you alone for a few hours? Done with this. Banned for a week. Come back when you can control yourself.
...hahaha..shame on that dude who knows nothing but to troll in this site. GJ krew.
Damned I missed here something ! Thomas, come back with a fresh mind, I always liked your comments..
Like the excitement, but this is 2013 and there are certain expressions that are no longer acceptable. Comment has been edited. Please refrain from profanity & derogatory words in the future. Won't ask a second time.
Krew, you are a class act! Thank you
Ban him too!
Thomas, I understand that it's easy to create a new email account and continue posting, but I would ask that you respect your ban. Don't make me block your IP. Take a break, come back next week.

Love it! The front has that mean bull-terrier expression of the 2007 LF-A concept. Stunningly aggressive, yet calm and gracious.
CVTs need to go from the Lexus lineup. Even the Chief Engineer/designer of the 3IS admitted that he dislikes CVT transmissions..

The new CVT from Toyota that's in the Corolla is pretty sweet. Acts like a regular automatic. Would never know it is a CVT BD

It's growing on me BIG TIME!!!
I think Lexus is really working on 'something' about the coming NX. dimension wise, its on Q5 and X3 territory,however, if they can sell it at a price relatively lower than of X3 and just a little north of X1's, it will terrorize both of them.
I have to admit . . . I like this iteration of the spindle grill. It sets the tone for the rest of the design flowing from front to back especially from the top view. Hopefully the production model will tone down the 'transformer' imagery and play up the gem-like scalloping most apparent from above . . . so long as it doesn't evoke "cadillac-ness." : ) I confess I'm slow to warm up to innovation. It is a shock when you first view it. There's certainly nothing else like it. I hope Lexus is successful in blazing this new trail. Beamer, Benz, and Oudie must be dumbfounded!