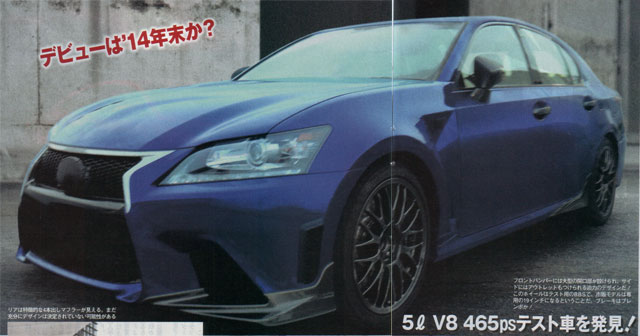 A prototype Lexus GS F has been spotted by Best Car magazine in Japan — along with the image above, there was also a closeup of the rear: 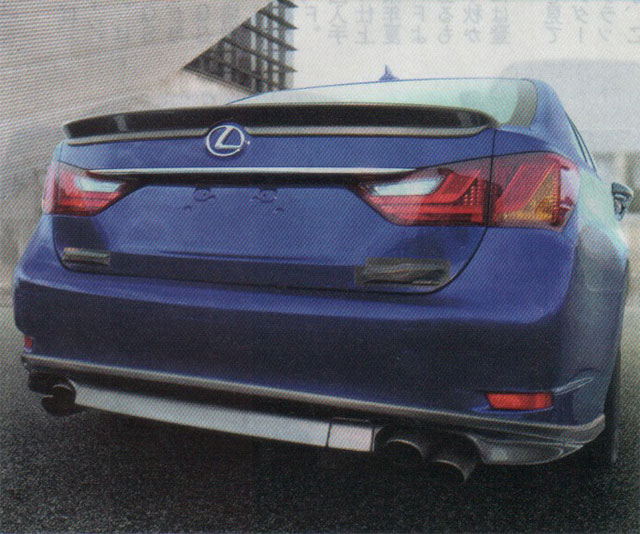 Look closely at the taped up badge on the right, and the F logo is clearly outlined — other additions include the larger trunk wing, quad-exhausts, and a revised rear spoiler.

One other spy photo captured the front fender vents: 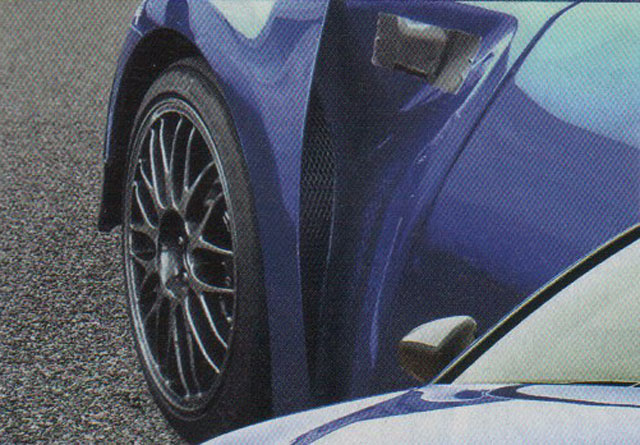 All together, this heavily modified GS could reflect the final appearance of the high-performance GS F — based on these spy photos, Best Car created this rendering:

The only other detail visible to a non-Japanese speaker is the engine specs — according to the article, the GS F would be using a 5.0L V8 with 465 hp, 10 hp more than what’s been rumored for the RC F coupe. 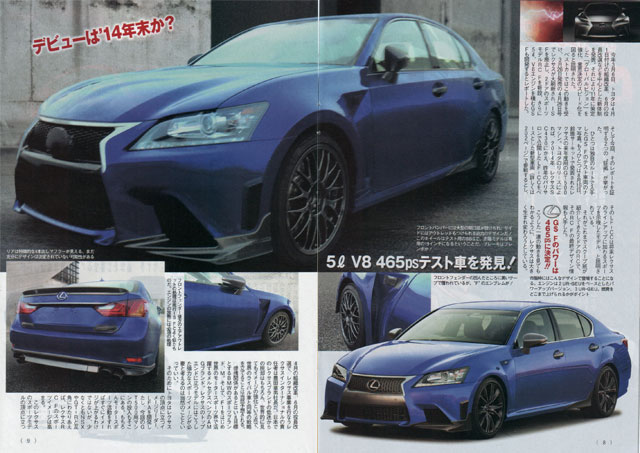 Woah ! It's amazing on looks ! But I thought it would come with facelifted front . XD
looks nice
I wish they did a full grille without the bumper but I LOVE IT NO MATTER WHAT! I am so excited! This will do so well!
I like it!! I want a bit more in front but it suits me!
Give it an IS-style full spindle-front and it'll be perfect!
Awesome news!! I hope it's legit lol, this BC mag is known for some notoriously photochopped pics. But if it's legit, I'm excited!! I'm sure the final product would be a little different at the front, and less looking like the f sport.
If this will be the first ever GS F , i am little disappointed that their didn't consider making the front fascia more like the LFGh concept which so aggressively looking and proper stance.
So far all I see on this prototype is the tacked on TRD aero parts... And the new fenders..!! I'm sure the final version will not rock the same bumper. ~ Joe Z

Yeah, agreed. There's going to have to be a full-on redesign of the front & rear for this to stand alone from the GS F SPORT.

I love my GS Fsport but, this would be perfect for me!
Why amber tail-lights? I thought that was abolished mid 2000's...

Ooh that looks good! Although I'm hoping for horsepower around 500, I have faith in what the handling of the car will be like. It'll be a good year for the F brand
http://www.youtube.com/watch?v=pHwdA1JSh9w
ughh.. the wheels and body add ons look like cheesy aftermarket upgrades and not factory at all.... its not flush. The ISF has no body add ons it had total different fenders bumpers and front end. The quad tailpipes do NOT work on the GS.. the GS bumper is much too long and big. I really hope this is a first design kind of thing this doesn't look flush or factory at all. The fender cut looks horrible also... NOT feeling this at all. This looks horrible im sorry to say this. Also whats up with only 465hp ??? Old models AMG cars gave the same output -___- Everything else in the class is pushing close to 600hp hell the old V10 M5 had 500hp... I dont wanna sound like all I care about is HP but come onnnn dont half ass this Lexus. You can make a big splash or a ripple with this car Lexus dont screw it up ! This car has to have at LEAST 560 hp to even MATTER in this class of cars Rant over....

I don't know -- I keep thinking about weight. To me, it doesn't matter how much horsepower, it's what kind of performance that horsepower brings. There's something bigger going on, I don't think Lexus wants to be 100+ hp behind competitors without being able to bring the same level of speed.
understandable.... but just because your making a lightweight car doesn't mean it shouldn't have good power. Both can be achieved. Giving this car 465hp is like giving the ISF 360 hp to battle the M3... power is essential in this class. Giving this car 465 HP it will get beat but the smaller C63. This car has to be competitive in handling AND power
The wheels , are off from LFA NE .

Maybe this will be the model introduced this month.

Don't think so -- pretty convinced it's going to be the compact crossover.

Hope not -- that's what F SPORT is for.
F Sport is just a suspension and appearance package. The GSF will get the 5L V8 and other F enhancements. while some people say it's not enough, im sure there are enough people out there who want something faster than a GS350 but not the hybrid 450h.
"465hp is more than adequate" for the IS-F, the GS-F should make something around 80-90hp more!

I don't know how I feel about that gash in the front fender :/ Needs more power. Turbocharge it :)
As for the "465-hp 5.0-liter V8" , I do realize it seriously down on power even if you compare it with E55 AMG from 2004 , unless Lexus can make GS-F have like 200kg lighter on weight advantage over the RS6 , E63 AMG & M5 , or else , this car is nothing against everyone else . Oh , and not to mention opponents like CTS-V , XF-R , and maybe more .
Amzaing when it comes to the exterior we still font know how will it look like from the interior side The only part that i didnt likeis the rear bumber its ugly & The quad exuhasts should be bigger
I wish they made the front with full spindle gril its just super japanese awesome They really should make the front like the Is spindle grile
This has nothing to do With anything official from Lexus. This is just some random person who threw on som styling bits on his car, nothing else.
cant wait t see the finish product. wish they would super charged that v8 but I think Lexus likes rolling with straight natural
PLEASE PLEASE Let this be the Truth. Would swap my 5er for this baby....
They need to try again