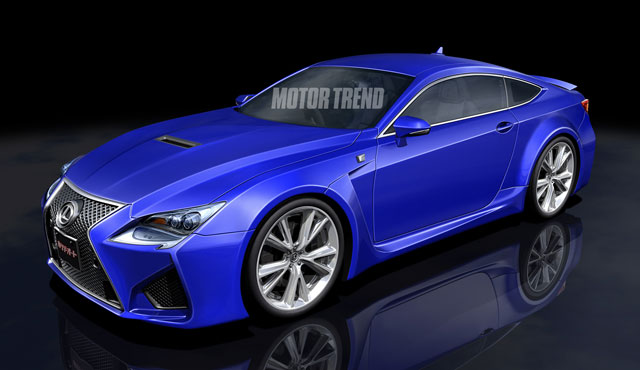 Peter Lyons of Motor Trend has breaking news on the Lexus RC coupe:

Slated for an autumn 2014 introduction, the new RC (stands for Racing Coupe!) and its RC F big brother will be the most exciting model to ever emerge from Lexus’s lineup by far.

The RC lineup will land in Lexus showrooms late next year for around $40,000, while the fire-breathing RC F will be priced a little north of $100,000.

…the flagship RC F employs carbon-fiber parts including the hood, roof, and trunklid. Oh, and that hood scoop has nothing to do with induction. Our insider tells us the intake sucks air in and channels it to the underbody, where it improves the car’s downforce.

According to Lyons, there will be four RC engine options in total:

There’s even more detail on the RC F’s powertrain:

Our insider also reveals that the RC F will clear strict new Euro-6 emissions regulations. To achieve that, the RC F will incorporate Lexus’ (and Toyota’s) first-ever cylinder deactivation technology in which four cylinders will be shut down during high-speed cruising. The RC F will also incorporate a paddle-shifted, eight-speed, three-mode (Normal, Sport, and Snow) automated manual transmission called Sports Direct Shift borrowed and revised from the IS F. It’s also fitted with an advanced fuel supply system and race-tuned exhaust for a beefier note.

There’s plenty more to the article, and I highly recommend heading over to Motor Trend to read it yourself — if the rumors are correct, the RC F will debut first at the Detroit Auto Show in January, followed by the standard RC at the New York Auto Show in April.

Your welcome for the tip, Krew. I don't think the RCF/ISF price structure will change. MT probably got the currency exchange wrong. The RCF should still be around $65k to start. BD

100k+? I think that's unlikely. And if so that's out of my price range. I think BD is right about 60-70k is more accurate, that's definitely where the market would be. Anyways, super excited! :D

Egg-zactly! (or watever u spell that)

Greatest news from MT in a while,,,,,,I am thrilled. This is only the start and beginning to what LEXUS has in the works for us. Can't wait ! LEXUS is out for blood and Global growth......look out...AKIO is showing his colors now....CONGATULATIONS AND THANK YOU MR. TOYODA !
Exciting news and the drawing looks great. A little more hard-edged than the previous rendering. But 100K??? Ouch
I believe its not true that RCF will cost north of 100k. This scoop from motortrend was derived from motoring.com.au which stated that Rcf will cost not far from the current isf. Motortrend didn't mention that it was in australian dollar.
oh so you can put a hybrid into a 2 door sport car but not the IS sedan, because hybrid 4 door commuters are great.

They actually did. U forget the IS3OOh?
in America I mean
The RC hybrid isnt coming to America either. But sure they can put the engine in both the IS and the RC. No problem.

i agree, no way this car is $100k. it will have to undercut the M4 and that car is rumored to start as high as $80k so this car is most likely just under 70k imo. the hood scoop is used for downforce? interesting.

Yah, that hood scoop(for downforce) is quite interesting. I think they have to made some special design in the hood to make that work. Though its not industry first, the cylinder deactivation is also interesting.

Good engine choice but that engine from camry hybrid should not be included. Why not just use the 2 liter turbo? A hybrid + turbo will make a very very good sense.

this is not the hybrid powertrain from the Camry. It has more hp (225 hp) and uses a new 4 cylinder engine. You will find this powertrain in the IS, RC, NX and GS.
The point is why not just use the new 2 liter turbo? Turbocharged hybrid will be more efficient and more fun to drive and can absolutely be considered as "racing coupe".
Time will tell us if Toyota will use Turbo engines for there hybrid lineup. For myself i don´t like Turbo engines - for many reasons. If the "Turbo" gets broken - it will costs you a lot of Money to fix it!! When i drive my hybrid hatchback everyday i don´t miss any "Turbo" - cuz in the "POWER" mode the car feels very strong.

Unlikely 100k? even if it is the F version, then were do you place the LF-LC =SC model 150k? 250k? remember Lexus still needs to be price competitive as well against the Germans.
$100K is NOT true in N America. The Australian price for the current IS-F sedan costs $125,000 so the article didn't clarify that fact.
WTF krew! That makes NO SENSE AT ALL!!!