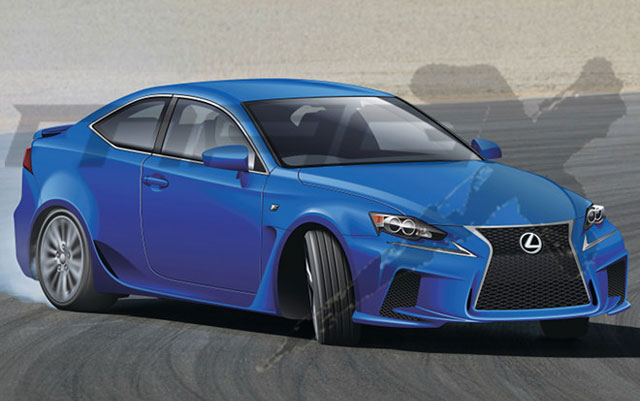 Mag-X claims that a high-performance RC F powered by the IS F’s 416 hp V8 engine will be released in late 2015– the translated text also repeats the rumor that the IS F will be discontinued after the current model.

Now we are talking RC300h F-Sport or RC F only time and money will tell.
A sporty,elegant Lexus coupé with no less than four engine options?! How did I become product planning manager at Lexus without noticing it? ;-) This exactly the car I would've made if I could've designed my own definition of the perfect luxury car! I'm all smiles here! :-D

... the only problem being that the two top engine options (V6 and V8) are hopelessly outclassed by the competition's forced-induction mills. When will Lexus finally release an updated (read: twin-turbo) V8? The Germans are running circles around them. And that's not even at the AMG/M/RS level where F just doesn't hold a candle...
The IS350 is still one of the quickest in its class. The ISF yeah, it just won't be able to compete with the next gen M3
);-)) First, the German's need to figure out how to develop turbos that won't blow up. M sales were stopped last year as a result of this on-going issue. And if you are thinking the GTR is a bargain, think again. Two brand new GTR owners dumped their new cars at my local Lexus dealership, took major losses, and drove off with IS-F. If you are not an IS-F owner or driver, there is no way that you can evaluate this machine against the competition. I would never by the bimmer again.
? Have you driven an IS-F lately...or out run an M3? The IS-F is it's superior on the low end and on the high end. On the track..A dead heat. The IS-F beat the C63 AMG by 3 seconds on a track run last year...tied the M3. So what is this nonsense about the German's running circles?
Completely incorrect. Although, the IS-F is better than nearly any turbo engine with similar power and I strongly detest ditching naturally aspirated engine for laggy, lazy and slow responding turbo engines, that is not true that IS-F can outrun the M3. The M3 is still the benchmark. I have driven both cars and the M3 is still the better car. Every comparison has hands down given the M3 as the winner over the IS-F, there are tons of straight line races where the M3 especially with M-DCT is equal or quicker in a straight line and definitely quicker around the race track. Again, the proof is in all of the tests that have been done. The M3 is still the benchmark. Although, IS-F is not too far behind.
Problem is, the first guy completely dissed the IS-F, putting it subpar to the C63, M3, and RS5 of its time. Granted, the new C63, and the new RS5 will dance circles around it, the IS-F was just as fast, if not faster than the C63 from 2011 and onward. Definitely not as good as the M3, but it was a serious competitor.

Everything is GREAT!! accept (2-things) they SHOULD add more HP!! and at least do something with the designe because it's UGLY//. Also if you want to MAKE this CAR special in the Middle East.. You should make it LOOKS more elegant/ and beautiful... Because, it doesn't LOOK good as the C63 Coupe and the M3 Coupe..

so how is everything "GREAT"

This sounds right to me. The sedan this summer, the coupe next summer, then the RCF, or ISF next. Now if Lexus replaces the ISF with the RCF coupe, THAT I can see happening. They may not bother making both. With Akio making every Toyota/Lexus a performance car, taking the most expressive and emotional Lexus, the IS, and getting rid of both the manual transmission and the ultra-high performance ISF for good would be pretty much impossible..... BD
I approve!
Very nice rendering.
If the RC turned out to look like that instead of closer to the LF-CC, i'll abandon lexus forever haha.

This is just a bad drawing. It will look like concept..... BD

Unless the RC-F substantially mimics the LF-CC concept and has a large V-8 under the bonnet I won't be buying!
It need to look as close to the concept as possible. No exceptions. This is too much like the last IS's back end: too narrow and too tall looking. Also, I bet that turbo charged four cylinder will be quick...
As long as it doesnt look anything near that render!
So pretty much Lexus went the old Jaguar and Land Rover route of designing a car before full-scale development and engineering even starts. It's clear that the RC was designed last year and the LF-CC was nothing more than a thinly veiled conceptual version of it. It's clear certain design cues of it clearly wouldn't match a conceptual version of the 3IS, but another variant or separate model altogether. Seeing that Lexus corporate likes to have production designs ready two years in advance, it's all obvious now when looking at the timing. Numerous cars like the original Porsche Boxter, had their conceptual versions rolled out as the production model design was set in secret and unveiled years later.
Starting from the top - the RC-F (noting the IS-F vents) will not and can not look like someone took 2 doors out of the IS, the concept above is an IS-C F and even then looks silly. I hope they do a lot more than take out 2 doors. They need to make it longer and lower. I do not understand the logic behind using the 2GR-FSE. They are building a new 2.0L Turbo charged engine ... the same will go for the 3.5L engine. Actually, I think these will be the choices 2.0 TC - 250HP or more (Turbo available through out the RPM band) 3.0 TC - or a bigger engine NA with higher HP 3.0 TT - Something monstrous for the IS-F with twin turbos hopefully developed by TMG As for the IS-F ... if they get rid of that car then the whole ideology of an emotional Lexus that is fun to drive will be thrown out the window. That is the company's strategy. That is what the CEO wants, that is what Junichi Furuyama has been talking about .., why would they make such an idiotic decision and drop the car? Only time will tell ... but they seriously need to think about what they're doing, market share and customer perception etc ... The LX, LS, ES, GS were all successful, but the new one should be a lot more luxurious. Take a look at the new S Class Mercedes, they've merged the Maybach and the S-Class successfully. That thing is a beauty. Look at the leaked images of the Mercedes CLA 45. Cadillac is releasing a 450HP CTS. BMW is taking it's time with the new M3 and M4. Lexus is being patient... no decisions have been made to put an end to any of their cars but I bet you anything that the years 2014/5 will be exciting for all manufacturers.

Why should Lexus create a whole new brand name "RC" just for a copy of the IS, with some minor changes ?! The people of Mag-X aren't serious with their images (see also the NX). Anyway, I can't wait until 2014/15. Next week is D-week for me ! I'm gonna make my pre-order of an IS 300h F-Sport. Amazing ! Exciting !