For the second year in a row, Lexus has been named the top brand overall in the 2013 J.D. Power Vehicle Dependability Study.

The study, which tracks the number and types of problems owners have with their 2010 model-year vehicles, is based on responses from more than 37,000 respondents — here’s how Lexus performed relative to its competitors: 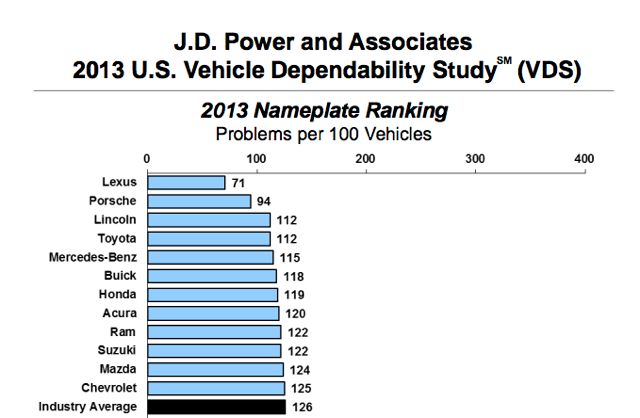 I think the most surprising thing on this list for me is how hard Scion fell compared to last year! I wonder if it's from all the problematic FRS', but then again how many FRS' are out there in the US.

Nah, it wouldn't be from the FRS since it's a dependability study for 3 year-old vehicles (i.e. 2010s).  But Hooray for Toyota Motor Corp winning the most at 7 awards, Lexus at 71 pp/100 and the RX 57 pp/100 for the best vehicle in the industry!  Audi 147 pp/100, and BMW 133 pp/100 keep struggling at or way below industry average. To put things into perspective, Chevy and Ford have significantly fewer issues on three year old vehicles than Audi's and BMWs do.
Haha yea I just read the full report after I commented and was like D'OH!

They should rename the award to "Lexus Top Brand Award."
No surprises here..
Where is the IS in that list?
This award should be called the "Who got 2nd place in Automotive Dependability Award?" BD
Driving the NX 450h+