The following is a message from Andrew Kirby, general manager of the Lexus worldwide product and marketing planning division, who has asked to address Lexus Enthusiast readers directly from time to time.

Happy New Year! Thank you for all your support and advice throughout 2012.

For all of us at Lexus, 2012 was a positive year. Global sales represented the second highest year in our history, with countries like Russia, Saudi Arabia, China & Korea achieving their best ever results.

Of course, it’s our vehicles that made this possible — not only did we introduce some amazing concepts with the LF-LC and LF-CC, but we continued to revamp many of our models.

The pace of change continued just last week with the unveiling of the all-new IS, including the introduction of the first-ever IS hybrid. (In fact, I bumped into Lexus Enthusiast editor Kevin Watts many times as he was photographing the white & red IS sedans on display.)

For Detroit, we also premiered our new display design that will start rolling out across all the major motor shows. There are new design features that really stand out, like the iconic box to showcase new models and LED floor panels that bring colour and attention to our performance range: 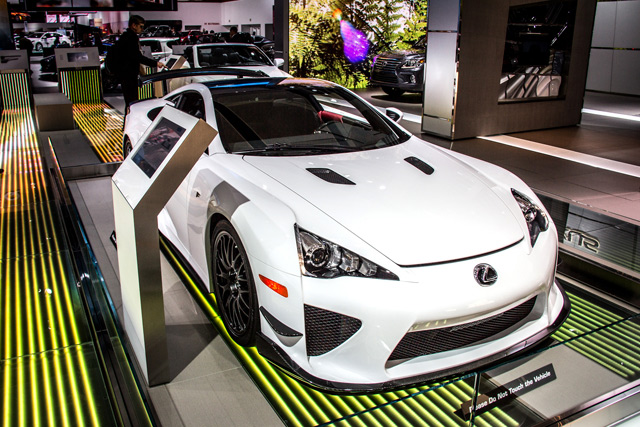 By the way, keep your eye out for our Lexus Short Films series. At Lexus, we want to celebrate the creativity of new directors from across the world, and help to bring these stories to life. You will soon see one of the film’s production diaries featured first here on Lexus Enthusiast.

Andrew Kirby is the general manager of the Lexus worldwide product and marketing planning division, which was formed two years ago to help guide the brand globally. www.lexus-global.com

Thanks for stopping by, Mr Kirby. Hopefully in Mr Toyoda's influence to make Lexus cars sportier throughout, he has seen fit to enable you to add the REQUIRED manual transmissions where appropriate, in cars like the Lexus IS and future Lexus RC. If you want to ride in the fast lane with the Germans, you'll need the proper tools to get the job done. Market leaders like the 3-series and Infiniti G have committed to using manuals, and if you want to be in that company, you will do the same. There are no shortcuts to greatness.  I see plenty of potential, some wonderful foreplay, but nirvana is still not on the menu.  If an enthusiast wants a great driver's car, Lexus still comes up short, by choice. Here's hoping that Lexus' best is yet to come.  We'll be watching...... BD

Though it is nice the Germans offer a MT, the last time I asked one of their salesman how many they sell he said "almost none". The last time Lexus offered an IS with a MT those cars sat on the lot a LONG time. Not what dealers want.
Base engines with no torque aren't what manual transmission buyers want either.  And Lexus has never offered the IS350 with a manual, so they can't say they've given manuals a fair shot. BMW sells enough manuals to keep them produced in the car, and they offer them on ALL 3-series.  Infiniti has offered a manual on the G for over a decade. They're doing something right.  Lexus is doing something wrong. If you don't want to sell manuals, you can manipulate sales so you can justify that. If you want to sell manuals, you can do the same. Lexus is in the former camp.   But if they want to be fun and sporty, and exciting, they need to offer more than grilles, harder rides, and lip service..... BD
More information on manual transmission "Take rate" in the US http://content.usatoday.com/communities/driveon/post/2012/04/stick-shift-manual-transmission-ford-focus-surprise-more-interest-------/1#.UQiLS-1DTss BD
It's true that manual doesn't sell at Lexus and yes it's true Lexus hasn't really given it a shot. Being sporty does mean offering a manual does it cost more to produce. It all comes down to it would we pay more for a MT option? Likelihood a RC F in manual not at all. IS 350 F sport should be offered with MT. Infiniti doesn't sell many G57 in MT. Is it because we enthusiasts create that little of demand?

Dr. Mr. Kirby/Lexus, Please keep low weight for Lexus vehicles a top priority. This is very instrumental in many various ways that us car enthusiasts can appreciate. Please do not let Lexus go the route of BMW, Mercedes, etc... they are becoming fat sloppy pigs with the need of hard suspensions and over-powering to keep them competitive..... Its understandable that the IS may have had to have gained a few pounds to be more marketable in terms of space, but at least try in those cases to offset it with some extra HP. Please keep the next coupe(s) as light as possible, using whatever weight saving measures possible, in order for them to be the most dynamically capable. If you are really serious about 'sportiness' that is. I applaud all of the recent efforts by Lexus! With the introduction of the latest models and with what is coming down the line. Keep up the excellent work! Designs are on point now in terms of bold, classy, agressiveness, and interiors are being done well, especially in the case of the new IS. Sportiness is now becoming a Lexus hallmark, in addition to their unparalled luxury and reliability. Just keep the weight down in the future as much as possible, and try to offer some more powerful engines as well to keep pace with the competition; and you will be at the top. Also, manuals, if possible, in at least limited numbers for F models, and possible F sport models. I understand the business mindset is not the enthusiast mindset, and shift paddles make more sense economically, but like BD said, the competition is offering them; so you should as well, even if in limited numbers. Again, keep up the good work! Best Regards