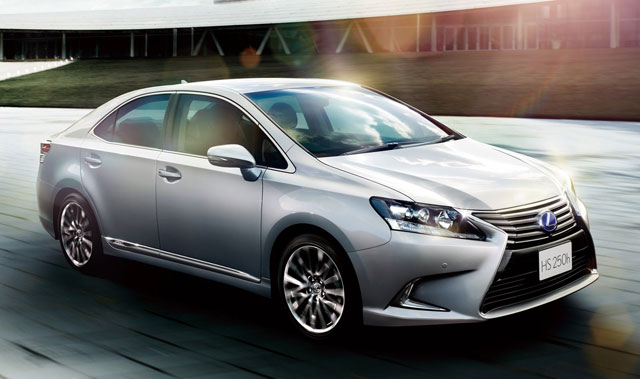 As reported in November, Lexus Japan will be offering the HS 250h updated with the spindle grille for the 2013 model year — today, there’s some new high-resolution photos of the not-for-North-America update:

There are a number of small changes and updates to the exterior and interior, but it all comes back to the spindle grille — by replacing the awkward shield grille, the new HS is an attractive implementation of the new Lexus corporate face.

Is this an update that could have saved the HS in North America? It’s unlikely that the model would be able to establish a foothold with the CT 200h & ES 300h straddling its position effectively. In fact, the HS 250h would have the same problem as an IS hybrid in North America — there’s not enough room in the lineup.

The problem with this car is the interior ... it's just dated when you compare it to the 2013/2014 line up
The face is much much better but the rear is still blah and its as if they didnt even try on the interior
Much nicer. Too bad it did not survive in N. America for 2013. Would have made sense to be replaced with the new sporty IS hybrid sedan as the CT is a cheaper hatchback and the ESh is the plush luxury cruiser. Missed opportunity by Lexus.
Front is way better.  It also appears to have the '13 ESh wheels (red picture) and '13 ES 350 optional 18" wheels (silver picture in motion).
The CT, or the HS, would sell better with the current Camry Hybrid powertrain. BD