Sneak Peek at the Next-Generation Lexus IS

Taiwan tabloid Apple Daily has published a previously-unseen cutaway image of the next-generation Lexus IS:

Most visible in the image is the front & rear suspension, however it’s possible to see some details of the IS front-end design — let’s zoom in a bit: 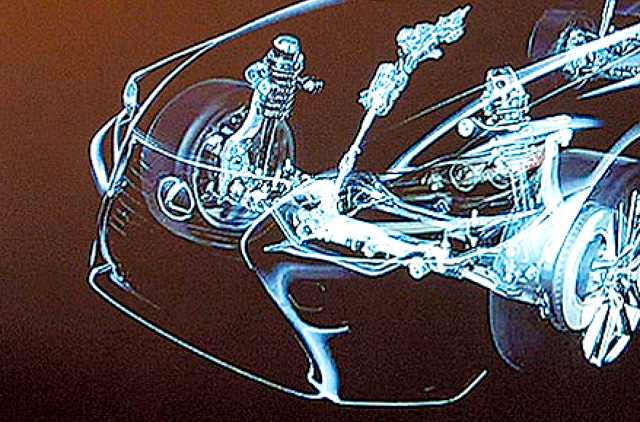 There are three elements that jump out at me:

There’s even better news — this should be our final sneak peek at the next-generation IS sedan, as the Lexus UK blog has announced that photos will be released tomorrow afternoon.

This was from the Apple Daily Taiwan branch, not from Hong Kong. Hopefully, my research is correct.

Just like those test drive unit , the wheels looks like the one from LFA ; another thing is , would the separator of the grille actually hidden inside ? So Lexus can made the IS looks like one huge grille like no others Lexus have before ?

That's what I'm thinking -- I guess we'll know tomorrow.
Whats tomorrow?! I thought they were revealing it the 15th...
Lexus will be releasing the first photos of the IS.
One Chinese site named Weibo has them.

If you look closely at the bumper area in this picture, it appears that camouflage was applied on top of the spindle grille to resemble a bumper... http://image.motortrend.com/f/roadtests/sedans/1212_2014_lexus_is_sedan_us_spec_prototype_first_drive/42059545+w968/2014-Lexus-IS-350-F-Sport-Prototype-front-view-3.jpg

Great observation!
Don't forget that there must be a place for the numberplate ?!
We don't have that problem where I live.Kind of nice,because those front plates really mess up the lines.

I didn't expect that front bumper to run that low and be that deep.  Very aggressive! BD
Another observation is that this picture displays the double LED headlamps (which in my opinion need to be a standard for Lexus design) similar to ones offered with GS and CT. This is different than the already seen single HID headlamp seen from the pictures from the prototype testing. Which leads me to believe these will be an available option :)
saw this a month ago here: http://www.youtube.com/watch?v=173KS-LF0WA didnt think it was that news worthy as you dont really see much and the press have already talked about the front suspension changes...
Here it is!

Just saw it here too! :) http://mediacdn.disqus.com/uploads/mediaembed/images/413/3804/original.jpg

Pretty.......intense design.  Nothing for baby boomers here.  Lexus definitely courting younger buyers. I can't say I like it.  Can't say I don't.   I like the grille!   An adult-sized rear seat and 14+ cu ft trunk are needed. Hope the dash has other colors besides black..... BD

Cant say you make any sense, at all...

After some easy brightness and contrast adjustments to the leaked pics you can clearly see that the new IS has a bumper dividing the upper & lower grille.

I'd definitely go for the IS,but as excited as I am about the new IS,the coupé (RC) excites me even more.

Too bad Lexus is making us wait on the RC.  My purchase will happen between Spring and Mid-Summer.  Like Amer said, the 4 Series is very compelling as a coupe alternative however a sedan - the new IS fits the bill.  With the NAIAS only one week away, I look fwd to seeing both in person - the final decision will be made there.
http://www.autocar.co.uk/car-news/detroit-motor-show-2013/detroit-motor-show-2013-lexus Just in the pics
Driving the NX 450h+