In advance of next-generation Lexus IS launch at the Detroit Auto Show in January, a select group of automotive magazines have been given an advance look at the next-generation sedan — Autocar has posted the very first review, with plenty of information to go through:

The UK will be getting two models: a V6 petrol-powered IS250…and the new IS300h driven here, which combines a 2.5-litre, four-cylinder petrol engine with an electric motor and a battery pack.

Remarkably, Lexus is aiming to get the IS300h certified at “under 100g/km”. The new car is based on the same new rear-drive platform as the recently-launched GS, although the wheelbase has been shortened and the track is also slightly narrower.

How does the next-generation IS drive?:

On the road, the IS300h is refined and easygoing. It’s fluid on winding roads and has a decent amount of bite in the steering. The overwhelming sense is of effortless progress with a reasonable dash of driver involvement. It is also impressively swift to switch into EV mode in urban traffic, something other hybrids are reluctant to do. It was hard to be definitive about by the ride, which was excellent on smooth roads but thumped somewhat on broken Los Angeles concrete.

Autocar also included this photo of the instrument panel: 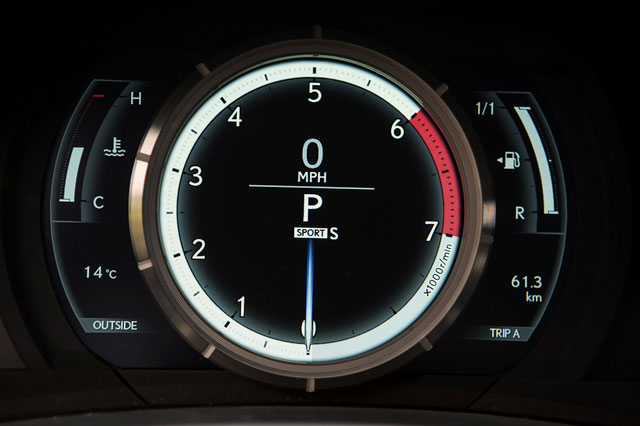 As the first-ever review of the next-generation IS, this Autocar article is a must-read — there should be more reviews showing up throughout the day, stay tuned!

Read the Autocar review of the Camouflaged Lexus IS

Love the instrument cluster. Obviously styled directly after the LFA.
The lfa style interior is amazing.
When I first saw the instrument panel , I thought ... Why you show LFA's instrument panel on next-generation Lexus IS ? ... until I realize this have much lower rev . :D
I would expect the current engines to carry over, and add the 300h hybrid to the mix.  The AR Turbo should be ready in a year or two. Toyota/Lexus has done a good job of keeping weight down, with the GS being the lightest car in it's class.  Maybe they get the IS250 under 3400 lbs, and the IS350 under 3500 lbs (currently 3527 lbs)? BD

Look at the hood. It is like in the IS-F, little higher. 5.0 would fit, probably...The instrument panel is amazing...
Looks very promising! I simply adore the "LFA meets GS" interior,and hope the RC will have the same interior design.
I would buy this for that instrument panel alone. My favorite feature of the LFA in a more affordable package? Win.
Does that tach slides?
man is the is250 still getting the same weak 2.5 engine?
Photos of IS300h F-Sport Interior http://my.is/forums/f235/3rd-gen-interior-447376/#post6666135 Thanks to k3vo for uploading pics from autoguide.com

They did a very good job of taping over all the interior finishes: black leather meets electrical tape.

For some reason I feel Lexus is going to come up short with the new IS because of the same engine there going to shove back into the 250. Really disappointing....
Edmunds Review up: bit.ly/YwJDwY 8 spd auto!

Disappointing to see that the antiquated foot pedal operated parking brake has been carried over to 2014. Most annoying feature on my 2010 IS.
Instrument panel ftw!
Driving the NX 450h+