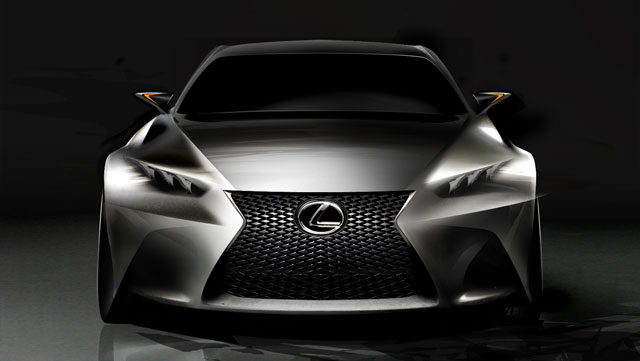 In a short press release, Lexus has announced that the next-generation IS will be revealed at the Detroit Auto Show in January — here’s the full text:

TORRANCE, Calif., (Dec. 4, 2012) – Lexus will reveal the all-new IS on Tuesday, Jan. 15 at the North American International Auto Show in Detroit.

Inspired by the acclaimed LF-CC concept and with design cues of the LFA, the new IS has been completely redesigned, inside and out.

The Lexus press conference will be shown live online at www.lexus.com.

A Detroit debut has been long-rumored, and this confirmation makes for a very exciting start to the year for Lexus. More soon.

(Note: The above image is a design sketch for the LF-CC, and NOT a teaser of the next-generation IS.)

Awesome !
Time to release The Beast from the Far East! Speaking of which, I also expect a "Beast 2.0" Super Bowl commercial, to piggyback the successful ad for the GS last year..... BD
Excited!
Why do journalists naively assume a concept car inspires a production model? It's vice-versa this time. There's no way that the LF-CC, that was designed & developed this year(through July/August) would've inspired the next IS. The design of the 2014 IS was already commented on in August 2010 by a Lexus executive and likely finished nearly 2 years ago. Being in the engineering field, I know very well that for a company like Lexus, it would be ill-advised to be in the design process less than a year before production starts.

Your right. Lexus usually has their production vehicle ready almost 2 years in advance. The last 2 years are mainly for fine tuning and finding the best color matches.

Great news!  In the market now - may pick this up until the coupe is available and swap into the RC-F.
There was a prototype review on the IS check it out http://www.autoguide.com/manufacturer/lexus/2014-lexus-is-prototype-review-video-2312.html Hopefull Lexus will fix the things they nickpicked on.  THE IS GETS THE LFA TACH!!!! SWEEEEEET!!!!!! :))))))))))))))))))))))))
Loving the LFA & GS influence!!!
Too bad the IS won't be revealed at the 2-yearly Auto Show in Brussels, which is 11-20 January 2013  http://autosalon.be
The current 3-series isn't as good as the 3-series used to be. Lexus targeted the last 3-series, but they probably should have brought in a 2001 M3 for an even more dynamic, pure feel.  Sport/Sport+ should be pretty damn sporty.  Sounds like they backed off in final tuning...... BD