Late last week, Lexus race car driver Akira Iida — the same driver that set the Nürburgring lap record for a production car in an LFA last year — tweeted the above photo of a mystery LFA prototype, describing it as his “next challenge”.

From the image, it looks to be the infamous LFA GTE prototype, which was first spotted last year in spy photos taken at the Toyota Motorsport headquarters in Germany: 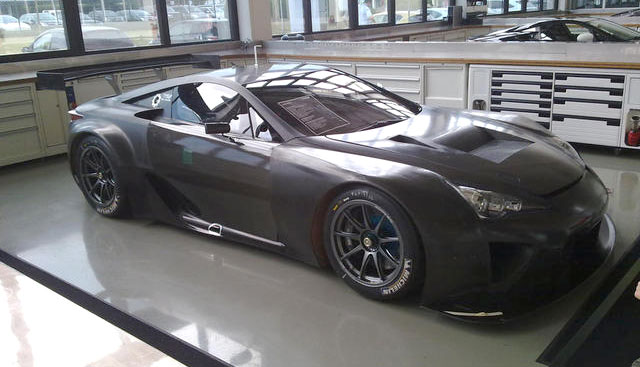 There are some minor differences between the two race cars, but they appear to be based on the same idea — the question is, what will this LFA be used for?

The original rumor was that the LFA GTE would race in the 24 Hours of Le Mans, but recent speculation suggests that the Gazoo Racing team may bring this prototype to next year’s Nürburgring 24h race.

To see if I could get an official statement, I reached out to Gazoo via Lexus Europe, and was told the following:

We have no plan to use the LFA for the 2013 Nürburgring 24 Hours race.

Looks like basically the same thing ... would be be Super GT machine ? :P
Maybe still going to be used for Le Mans :)  GTE  PRO

ooooh man!!!! i would go crazy of excitement loololololol TS030 Toyota in LMP1 and the LFA in GTE PRO....that would be sweet to see the lfa running against the aston and ferris..

Maybe to be used as a new lap record attempt on Nürburgring?
TX 550h+ Trademarked