A Closer Look at the Lexus LF-CC Concept Interior

As part of their Paris Motor Show preview, Car & Driver has a gallery of previously unseen Lexus LF-CC photos, including these shots of the interior: 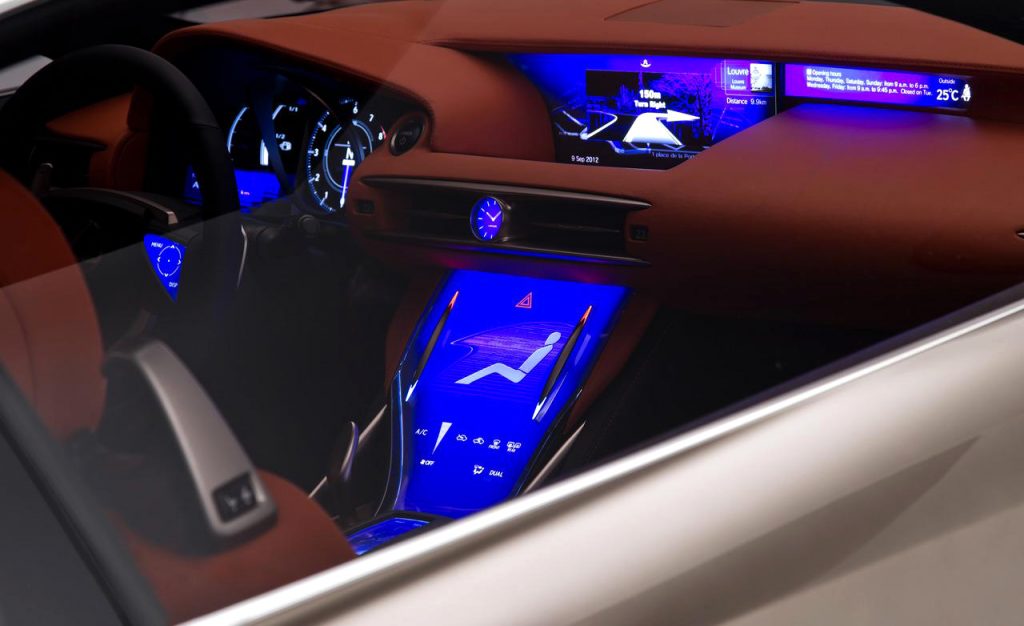 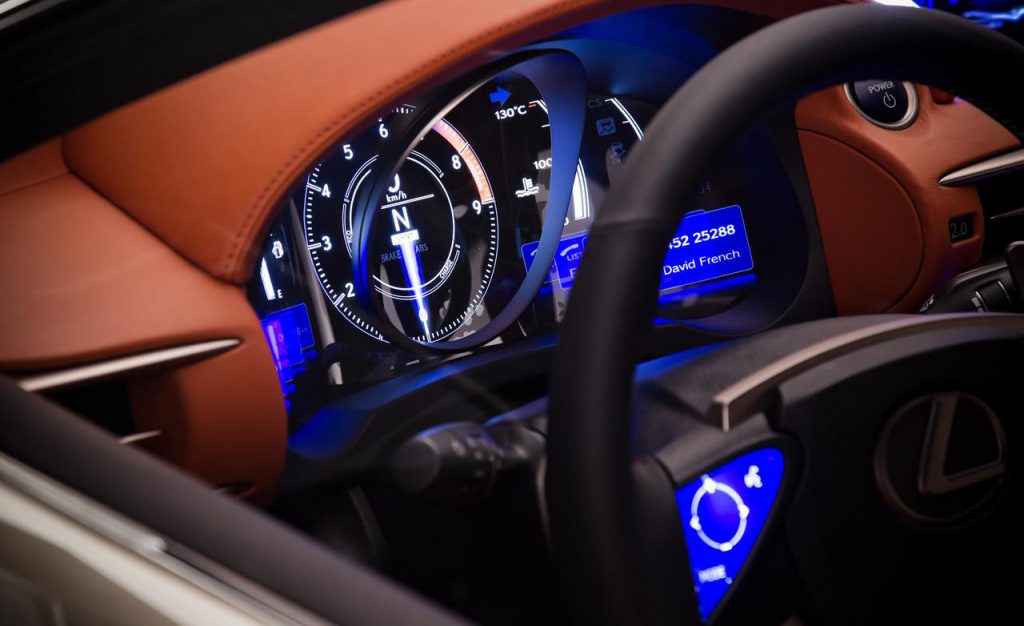 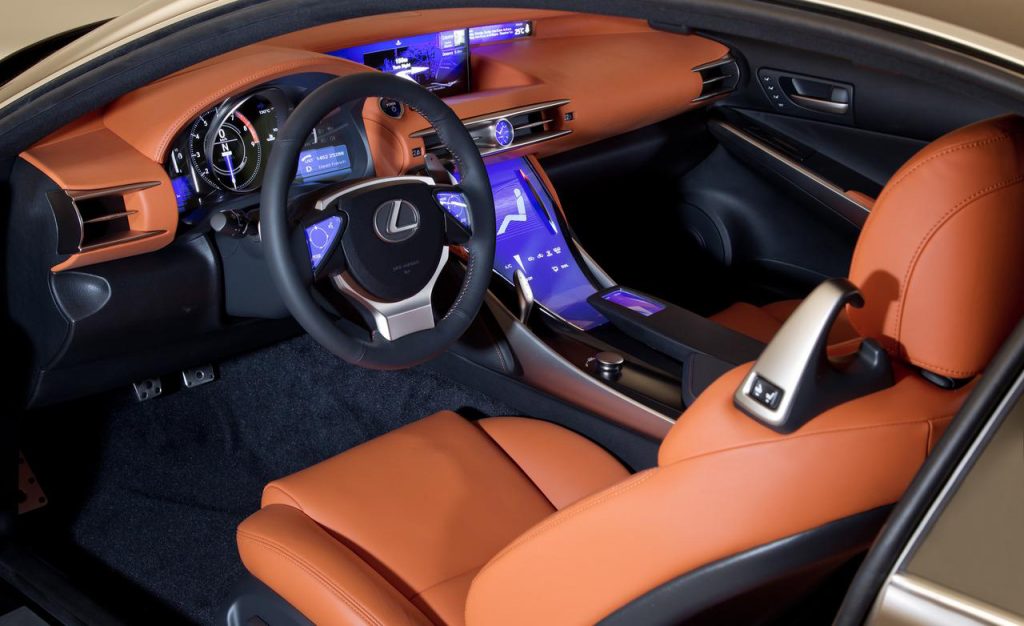 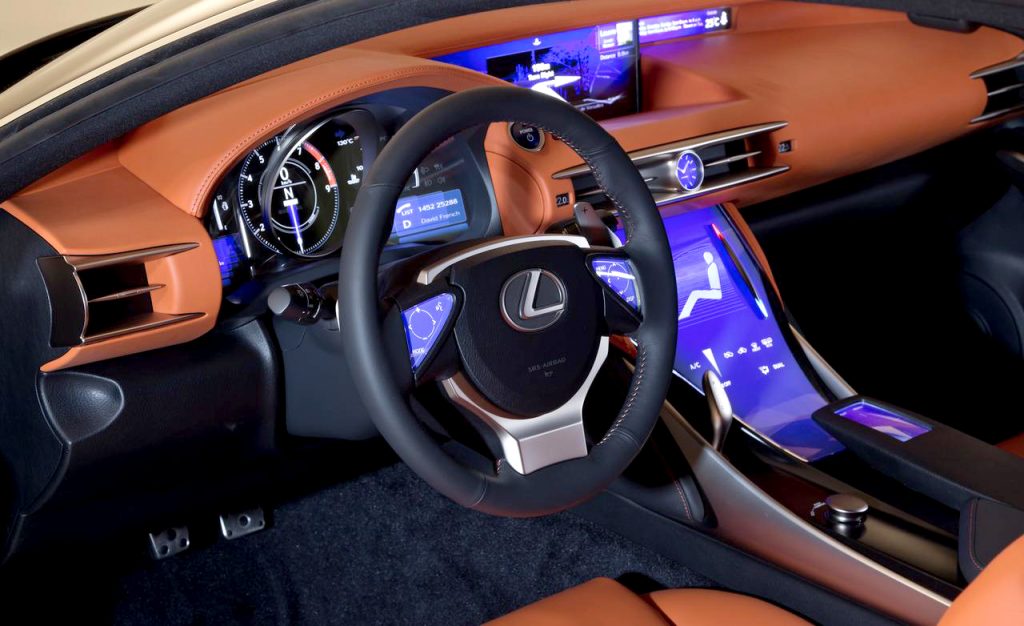 It’s impossible to look at the LF-CC interior without talking about all the displays — there’s a screen for everything, from the instrument panel to the clock to the central navigation, and every possible interior control has been converted to a touchscreen.

Beyond the LCD overload, the interior of the LF-CC looks production-ready — the seats, the doors, and the general shape of the dashboard and center console all have a polish that suggests the cabin is set for manufacturing.

One concept-only element that I really like is the touchscreen Remote Touch controller: 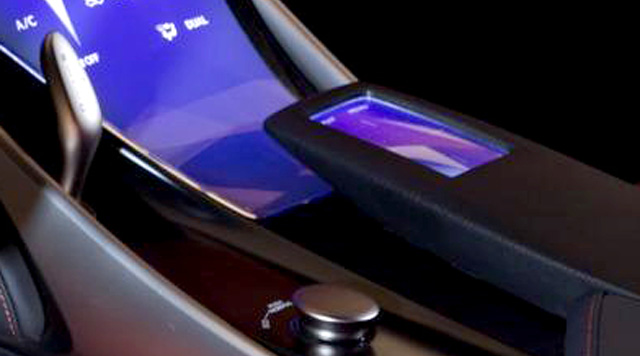 (This brings up an interesting point — it wouldn’t surprise me to see the third-generation IS have a LFA-inspired instrument panel, similar to the way it appears in these photos.)

Seats look like they're from the current IS C.

Absolutely -- fine by me, the seats actually work quite well in my experience.

I would gladly take this concept as-is.  Loving ever millimeter of it.   Can't wait to order an ISF Coupe. The technology centric interior is simply amazing - hoping it retains this stealth fighter cockpit with LFA inspired mph/rpm gauges.
Hopefully, the IS gets a turbo four with 250HP, so the GS can add that engine to the lineup in 2015 The weak base engine isn't helping sales.  It needs more power and better MPG BD
OK. I'm not sure what went wrong but I could've sworn I left a comment here. lol I hope you're right ...    (This brings up an interesting point — it wouldn’t surprise me to see the third-generation IS have a LFA-inspired instrument panel, similar to the way it appears in these photos.) I called it a couple of months ago.http://lexusenthusiast.com/2012/07/04/new-2014-lexus-is-rumors-from-australia/#comment-576651654

I realized how silly I was after I wrote this -- the current IS F already has a LFA-inspired instrument panel.

That's incredible.. Hope the production stays the same!
What I really noticed in this design are the following: Steering wheel is sexy as hell Air conditioning vents - oh my ... but I don't see how you can adjust them ... Handbrake is pretty nice but not ergonomic ... actually it looks like it would feel a little weird and stuff can get lost in there. Where is the gear lever? Will it be the same as the LFA? A knob? Love the leather padding to the right of the driver's knee The contrasting colors makes the car stand out The digital temp. display is perfectly located The huge sub woofers, great but lol - seems like I would go deaf playing loud music Can't forget the placement of the on/off switch ... much better than the previous IS

The hand brake you are referring at is the gear lever ;-)
The one thing I don't like about the interior is the puffed-up leather on the dash -- looks like it's hiding the production dash underneath.

all the tuch controls have to go, it is not practical ' you can't beat the tactile feel of buttons

Isn't that what everyone said about touchscreen phones? Although I do agree to a certain degree. Some of the buttons should remain buttons just like how volume buttons never disappeared.
There is some truth to this about the importance of tactile feel for human factors, this is part of the reason why there is force pressure response in the remote-touch controllers. With that being said, the touch-screen human machine interface (HMI) is part of the future designs ergonomic engineers and human factors specialists are looking at for vehicle interiors (usually a design gets made 5 years in advance). Trust me when I say, they test everything from the positioning of the buttons to the size, feel, so that there is less having to monitor where and what your doing and more time concentrating on the road.  I think Lexus has done a phenomenal job at their current HMI with the remote-touch and the giant center console. This is why we should expect a remote-touch controller, large center console and a small configuration of buttons clustered under the clock/vents to split to zones of the vehicle similar to the new ES/GS/CT. This way, the oldschoolers can use their buttons, and the newschoolers can use the safety and HMI features such as remote-touch and hands-free commands to control functions for safer driving.
I agree, but I must say that Lexus cannot and does not have interiors designed that early. They like to keep their products' design as fresh as possible upon production and not frozen for years on end. Only Mercedes-Benz even comes close to that figure and they were barely working on the S-Class W222 interior design in 2009-2010. Lexus interior design work is usually finished 12-18 months before production and the exterior about 20-36 months. You wouldn't have found the upcoming IS exterior/interior even as a final sketches 4 years ago nor the '13 GS.  The GS being the earliest spindle grille model was actually finished in 2009 and didn't even have the interior design completed until 2010. The IS interior design probably wasn't even fully designed until last year or early this year, so it's still pretty recent and nowhere close to 5 years. The concepts are usually done 8-12 months in advance and completed a month or two before introduction, so that's probably even fresher than the actual IS interior.
Correction: *as final sketches*
Quick question -- where are you getting these timeframes from? I'd be interested in reading the source material. Thanks! :-)
Really, the only touchscreen controls in the LF-CC that seem impossible are the ones on the steering wheel -- all the others replace controls that I would have to visually confirm before using. (Well, maybe not the volume knobs.)

hmm i'm not really feeling the backside of the car imo
I highly doubt the interior for the IS would look that nice... Why would they not have that on the LS, GS or the ES?  Its prob the 4th generation design for like 2018 or something
Driving the NX 450h+