Just hours after a LS F SPORT photo was released by Lexus, the standard 2013 LS has surfaced on a South Korean message board Bobaedream in what can only be described as a strange situation: 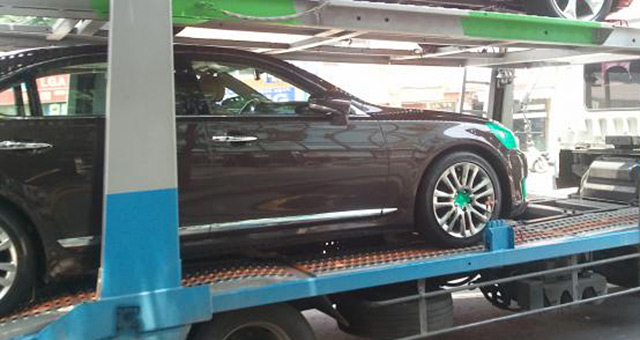 (Note: I believe the red car is a Toyota Venza).

These first real-life photos of the 2013 LS give us a much better idea of the exterior changes — overall, the design looks sharp and modern, and there’s even a hint of the new interior, though all attempts to enhance the images revealed nothing.

Now considering the full LS F SPORT has already been revealed, it’s a question of how the standard LS will compare — blue tape covers up most of the details, but it is possible to zoom in a little: 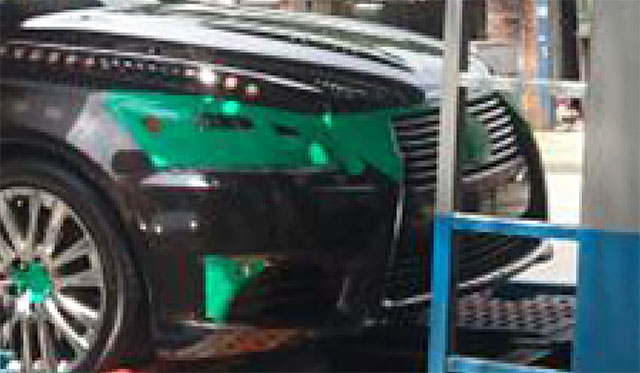 As to be expected, the mesh of the F SPORT has been replaced with a more conservative slated design. Beyond the reworked front & rear bumpers, the only other obvious difference between the standard & F SPORT editions is the wheel design — anything else I missed?

This facelift is quite big though ! I really like the taillights!
Whats the red car above it and why are they trying to hide it?

That is the Toyota Venza BD
Clearly it's a Venza. So glad my parents got one. I so love that car. Drives really differently from other Toyota cars, too.
Did they get the beast V6 ??

The current car is a great looking car, so an evolutionary change is the right move, IMO. Compared to the S-Class, the current S-Class doesn't impress me, and the new one doesn't impress me either.  The Lexus LS is the best looking car in the class now, and going forward, until I see different. This is not the 2006 LS430..... BD

"Compared to the S-Class, the current S-Class doesn't impress me, and the new one doesn't impress me either." Again, why are you talking about the upcoming S class and how "it doesn't impress you"? That's unfair since the new S class isn't out yet. All we have are spy shots. Furthermore, drive the two cars (the 2013 LS and S class) side by side for an entire week, then come back and talk about being impressed or not. Judging cars based on spy shots or press photos isn't helping anyone.

The red car above is Toyota Venza.... looks like a facelift too....

The facelifted Venza is already on Toyota's website, these must be older pics....
No, this is the facelift Venza. You can clearly see the single-slatted new grille on the red Venza, which is a feature on the refreshed model.
That's. what. I said. The red car is a facelifted Venza! I don't know why they taped it all up, everybody knows what it look like.

I think red turn signals make the lights boring, and amber is much easier to distinguish from the tail and brake lights.
God I hate LED turn signal lights! They're a hazard as the way they flash on & off is very artificial.. And aren't as noticeable as the normal lights

Lol bobadream! I used to check on that site regularly.
I believe I am seeing a new downward turning crease above the rear wheel well.
Full ofiicial pics! http://www.clublexus.com/forums/7385109-post420.html

WOWWW...Did you see the big screen on the dash?is hugeee...

That's gotta be bigger than the GS, but not as big as the Tesla S And bigger than the new S-Class, which looks dinky...... BD
Yea you right BD,did you notice the rear have a shape like spindle grill in the truck and the rear bumper? Oh btw the LS interior i can see too the analog clock under the screen that mean all new interior ;) Blind spot monitor too in the side mirrors.
Love the rear now!

Krew, Look carefully at the 3rd picture. You can see a redesign dash. Looks nice!!! I also like what they did with the foglights area. They are just shoved on there like they are with the ES and RX.
Looks very hot!!!
This is absolutely BEAUTIFUL. Can't wait to see it posted on MotorTrend, so all the trolls on their can wallow in envy.

A  stunning new vehicle and will sell very very well.....in looking at the 2013 S class this car will outshine the competion by leaps and bounds.....

not really feeling the back the back bumper sticks out a bit too much imo and the lights remind me of some toyota from somewhere
I've seen the next S-Class rendered.  It looks old and gay...... BD

totally agree with you

Looking big body and smooth ! I like ! What I find funny is that they use green tape to cover up parts of the car that doesnt really help hide the car... the grill is a dead give away to what kind of car it is lol at least cover that up. So smooth and elegant. Wonderful. I cant wait till we get the list of new things/updates this car has to offer
Ok, very nice. Wasnt sure after the first pics. Lets see what the interior and tech upgrades are. I am hoping to see some weight reduction perhaps even stiffer chassis. Reworked engine on the 460, a power bump in the F-sport would be nice Atkinson cycle hybrid? The 600h needs to lose a lot of weight... Only a few days.....and we'll aal now

The only rumor that has had any life to it is the car will go on a diet. I expect 100-500 weight loss, depending on the model.  The hybrid needs the most gym work..... BD

Wow, I guess these are the same vehicles I saw when I was at the Korean proving grounds last weekend being prepped for testing.  That is the Venza and the new LS.
Lexus forum Netherlands placed some more pictures of the LS460 F-Sport. See www.lexusforum.nl

The top picture is the most Boss BD

Hello everyone, After seeing the newly discovered photos of the LS last night on Club Lexus, I want explain why I will not be posting them right away. As I mentioned a couple days ago, I have been invited to the LS debut in San Francisco by Lexus. Part of that invitation was an agreement that I would not publish any official information until Monday at 8:30 PT.  These new LS photos were discovered on the Lexus press website by a very crafty fellow, and while I'm very excited by what I've seen, publishing them would go against the agreement I have with Lexus. I will not delete the link to the photos above, and will not remove the photos that have been posted already, but I will delete any newly uploaded images. Thank you for your understanding, Kevin Watts Editor, Lexus Enthusiast
Driving the NX 450h+