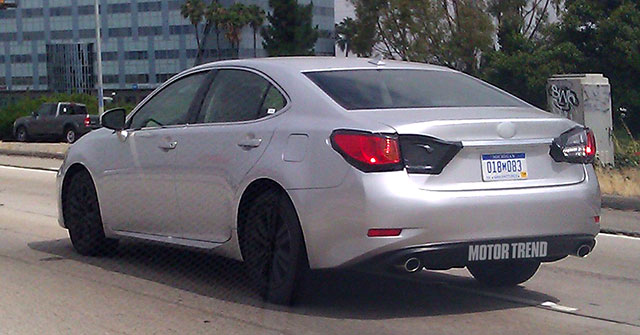 Visible differences on the mystery model are black-painted wheels and different Frankenstein rear lights — curious modifications for a car that’s already seen its public debut, and makes for some interesting speculation:

Take a look at the photos and tell me what you think — F SPORT, AWD, ES prototype, or something else entirely?

could be an ES hybrid

Hoping its an ES AWD or F sport....id hazard a guess its an AWD if anything due to the standard ride height.
motor trend claims no ES F sport or AWD model will be put into production because of the way customers prefer to "steer rather than corner" this car. But they could always be wrong.. But i still wouldnt want an ES, F sport package.

lexus said there was 5 f sport models this year... GS F SPORT RX F SPORT LS F SPORT AND IS F SPORT .. THE GX is out because it hasn't changed for 2013 so it might be an f s sport and LX has all its config already and I don't think a new CT is coming for 2013 as it already have the spindle gril from day 1

I vote AWD. I'm sure dealers were on Lexus about adding that.  And I'm sure it would help sales in the Northeast..... BD
Familiar taillight , forget where I saw it before ... AWD could be it , if it's F-Sport , they should test with bigger wheels though .

Well the supposedly tweaked taillight kinda reminds me of the old Hyundai Elantra...hopefully it won't end up looking too similar. : /  My opinion, AWD!
-_- u got to be blind there is tape on the other side relax
The right side taillight remains me of the HS.
u caught that too right I taught so too
You're right , the right side one , on the trunk , is indeed taillight of Lexus HS250h , http://www.carmagazine.co.uk/upload/11780/images/lexushs250h.jpg
I think I've got the answer for my own question , http://upload.wikimedia.org/wikipedia/commons/b/b3/Toyota_Mark_X_350S_rear.jpg  2nd generation Toyota Mark X's tail-light , notice the indicator is place toward center of the car .

this is a emissions test model.
must be the tweaked model! jk hahahaha but seriously, remove some badges and black wheels and this car would look hella cleean. I hope F-Sport, but the demographic really doesnt need that, i hardly see younger audience/enthusiasts in this car. So AWD maybe, but still wouldnt really be needed. and why cover the tails? why you confuse me lexus!? haha

By "this car" i was referring to an ES350, sorry that wasnt clear.

Don't matter if is AWD,F-Sport,etc... Why taillights have different shape from original ES 350 and hybrid? If you remember model like GS-GSh,LS-LS600L,RX-RX400h,Lexus change only the color from taillights and headlights but not shape,just I'm saying!
It is just a normal ES 350. They forgot to remove the taping after the official launch.
Possible European version?
A large rear diffuser on ES Oo? Maybe F Sport ES I think
The Lexus ES would look cool with wheels a bit larger..

I think so too I think for this new design the wheel are way too little and the give the car a different look.. I think 18 or 19' would b perfect for this car
I think 18" will be an option.

2013 ES350 F-Sport and AWD confirmed to no be available in Canada.
My vote is neither on the AWD, nor the F-Sport.  That would be for the IS.  My feeling it it's just a standard ES 350 undergoing final testing/tweaking that is lightly camouflaged because it has not officially been sold on the market yet (August 2013).

i am pretty sure that a AWD model of the ES would help Lexus sell this car in some parts of the world....
Unrelated: Is it me or does the first image makes the ES look boring? In the third image, the ES looks elegant. Related: This camouflaged car is unlikely to be the F-Sport. The wheels are way to small. And is the rear diffuser blacked out as well?
Driving the NX 450h+