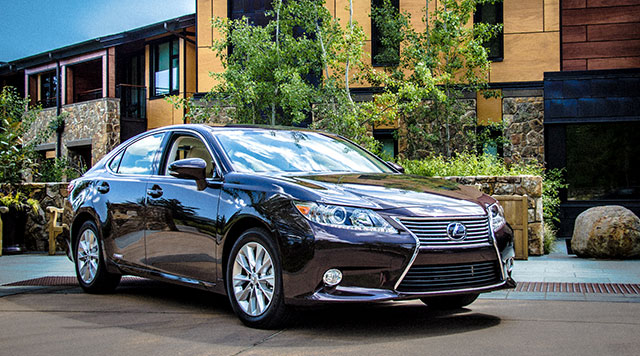 Last month, Lexus invited me to Newberg, Oregon, where I had the chance to try out the all-new sixth generation Lexus ES. The following is a recap of my time behind the wheel of the new model — for a more thorough overview of the ES 350 & ES 300h, please refer to my previous article.

After a morning of presentations, which I summarized in my earlier ES article, it was time to start driving, and first up was an Obsidian ES 350. 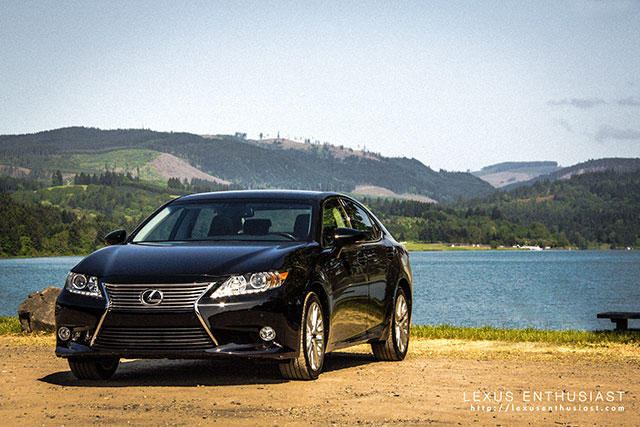 The black exterior proved difficult to photograph and prone to heavy dusting on the back roads, so rather than stress too much on the photography, I focused on the driving experience — compared to the outgoing model, the handling has improved in every conceivable way, and it all starts with the new Lexus Standard steering wheel: 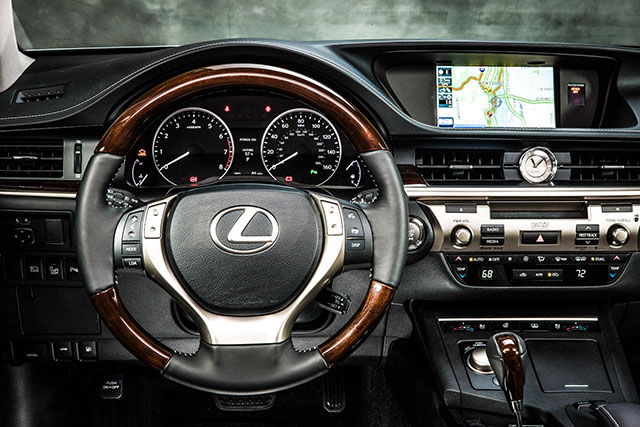 The heft of the steering wheel reflects the improvements made in the suspension, as the ES no longer feels like it’s floating along the road — instead, it has this satisfying weight that I would equate with the LS 460, a higher class of quality that directly links the ES and the flagship Lexus sedan.

The interior has been dramatically improved as well, and shares many of its features with the fourth generation GS — however, where the GS is surrounds the driver like a cockpit, the ES has an airy cabin, opened up and accessible. Even though the rear seating is where the ES’ size increase is most noticeable, the entire sedan feels spacious, with a warmth that I like in a family sedan.

Much has been made of the hand-stitching across the dash, but it really is a nice touch: 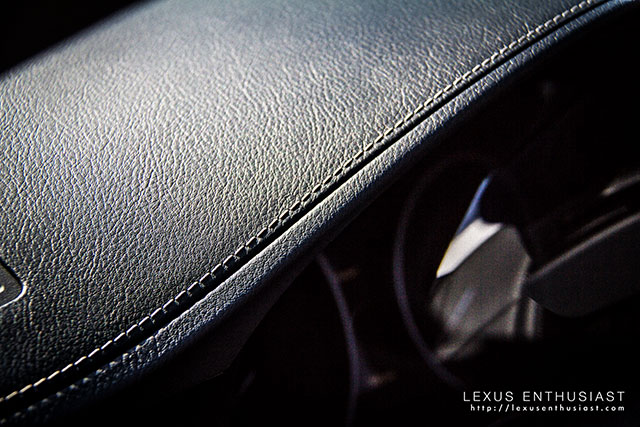 Another nice detail is the second generation Remote Touch controller, which has already been improved since its debut in the GS — placing the “mouse” on a slight decline makes it fit better in the hand: 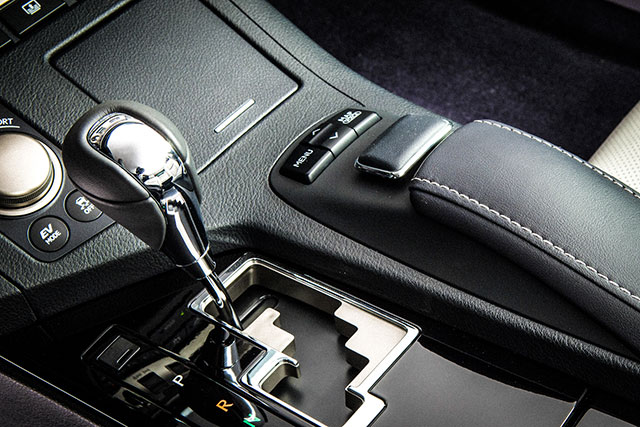 Turning in the black ES 350, it was time to try out the ES 300h. I picked Cerulean Blue Metallic as my exterior color of choice, and set off to test out Lexus’ latest hybrid — though ten minutes into the drive, I stopped to take some photos and examine the new ES’ styling.

Let’s start with the side profile: 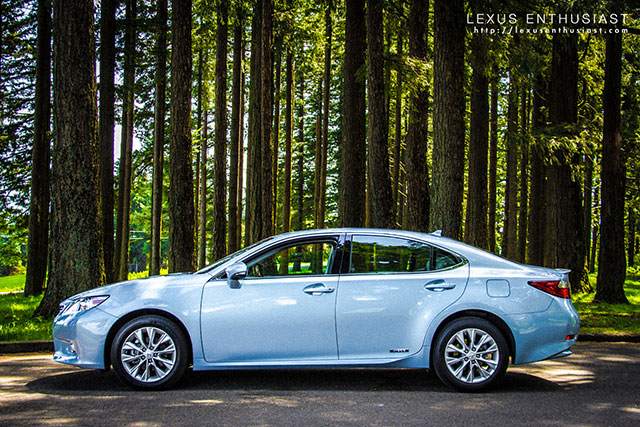 This is another area where the ES has borrowed from the LS — the rear half of the sedan looks like a updated version of the LS 460. There’s still a bit of bulkiness in the front that betrays the front-wheel drive, but for the most part, the profile is sleek and handsome. The hybrid-exclusive 17-inch wheels are attractive, but appear small inside of the pronounced wheel flares.

Moving on to the front-end design: 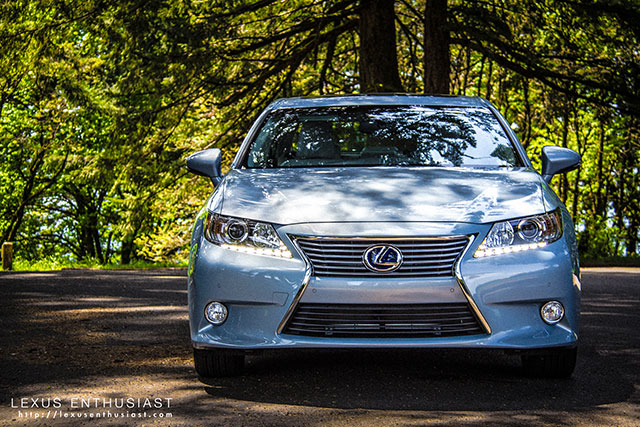 I’ve long maintained that Lexus designs must been seen in real life, and the ES is no different — the front nose has a blunt edge that doesn’t show up in photos, and it’s this shape that frames the spindle grille and the hood line. Here’s an attempt to illustrate the point: 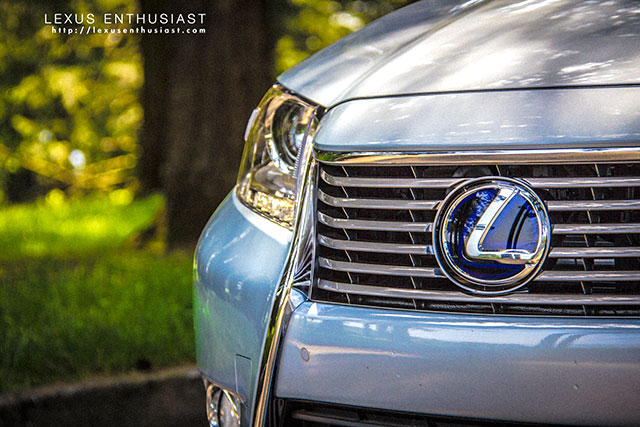 That said, there is a curious fold where the hood meets the headlight: 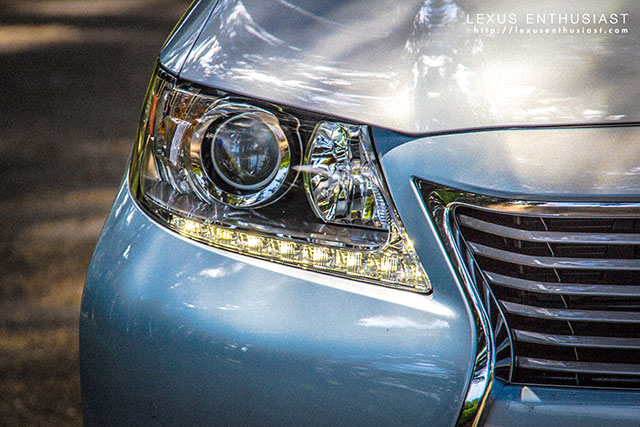 As for the rear of the car: 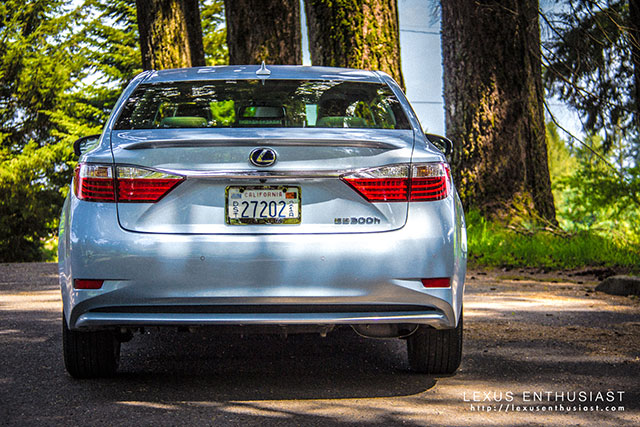 The influence of the spindle grille shape has clearly given shape to the rear design, much more than the fourth-gen GS. Notable is the ES hybrid’s standard trunk spoiler — it might seem like a small change, but it adds a necessary amount of character.

Getting back on the road, I turned the Drive Mode Select to Sport and settled into the route that had been laid out. From a stop, the V6 ES 350 might be faster, but coming out of a corner (or really any time there’s a need for in-motion acceleration), the ES 300h pulls instant power from the electric motors — it might be my style of driving, but I found the hybrid more engaging on the road.

I wrapped up my time with the ES 300h with one more photo stop:

Despite the ES 350’s 68 horsepower advantage, the four-cylinder hybrid felt like the definitive version of the ES to me — the whisper-quiet electric power and near-double fuel economy of the hybrid personify the character of this car in such a way, the only question is why it took so long.

This ends my coverage of the 2013 ES media preview in Newberg, Oregon. Special thanks to Lexus for inviting me to this event. 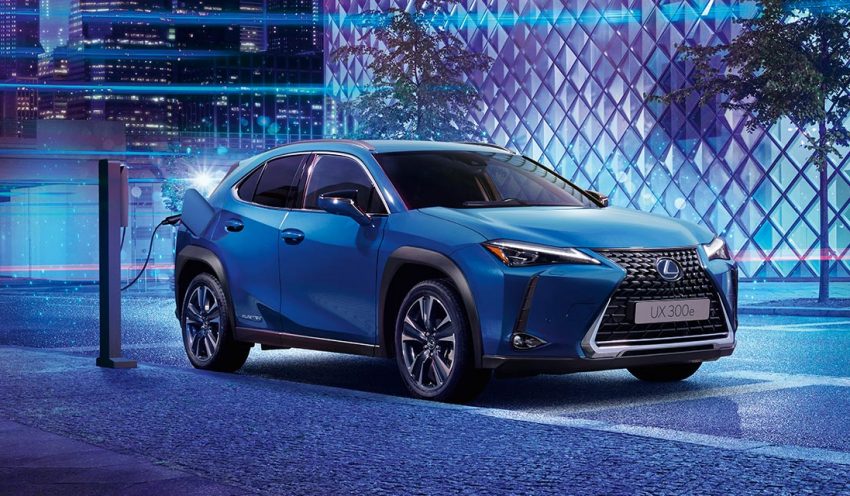 Uncategorized
The brand's first EV will be available in China, Europe, and Japan.

A simple question , did the new Lexus ES350 have the ski-hole on the backseat ?

Didn't notice, let me find out.

Nice work, Krew I take it not many hints as to the pricing of the two...... BD

You know what, I didn't even ask. They said at the presentation that pricing wouldn't be announced until closer to the release.

I guess not as there is the GS as a sports sedan. But I might be wrong.
GS is for performance oriented and ES for comfort oriented. So I doubt we will see an F Sport ES in a short term, we might see it in a long term or couple of years.
Well, the same could have been said about the RX... It was always comfort oriented... But Lexus somewhat changed that...
That's a good question. The GS is significantly more expensive, so it would be nice to have an F-sport ES. Lexus made an F-Sport version of the ultimate grocery getter, the RX, so I don't see why not.
Personally, I wouldn't think so. I'd prefer an AWD version rather than a F Sport.

Thanks for the write up and preview Kevin! I can't wait to see the final pricing!
Will 18" wheels be an option on the ES 300h?  I'm very interested in this car, but the 17s really look out of proportion.

Thanks, Kevin, for a helpful review. More questions about wheels & tires: I'm wondering if you had an opportunity to evaluate/compare road noise from the 18" tires vs. the 17" tires and if so, did you observe any significant difference?  Also, do you happen to know whether the 18" tires are the "low profile" kind that would be expected to have a substantially shorter tread life than the 17" tires?

You do sacrifice some ride comfort with the 18" wheels -- my recommendation is to take an ES 300h out (only available with 17" wheels) to compare for yourself.