Now that the 2013 Lexus RX 350 has arrived in U.S. dealerships, longtime Lexus Enthusiast reader & Flow Lexus of Greensboro employee Brendan Bogue has sent over a detailed description of the Display Audio controller first spotted in a 2013 ES promotional video. 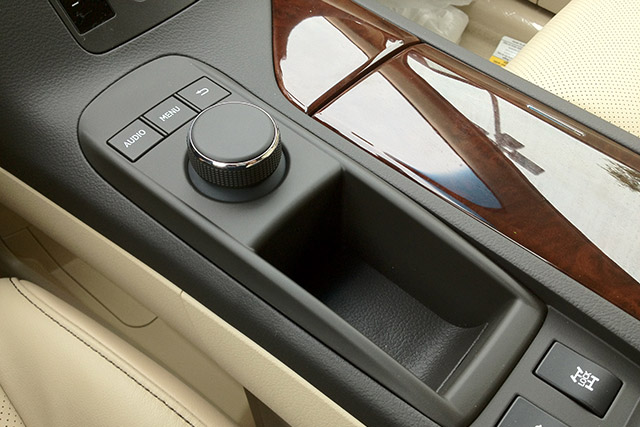 The controller turns in either direction continuously to select anything on the screen, and also moves up, down, left, and right. Physically pressing the controller down acts as the “enter” function, and there are also three buttons for Menu, Audio, and Go Back. 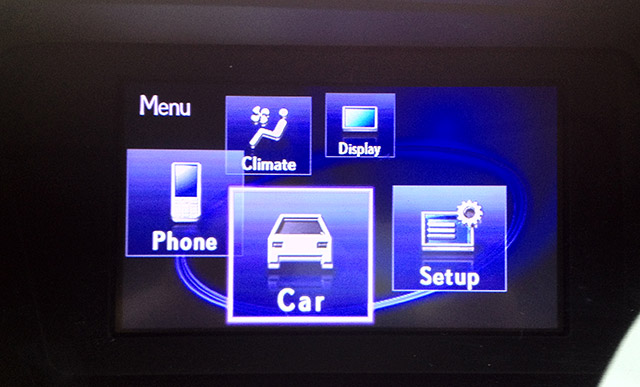 The different options (phone, climate, etc) rotate in a circle as you rotate the controller. 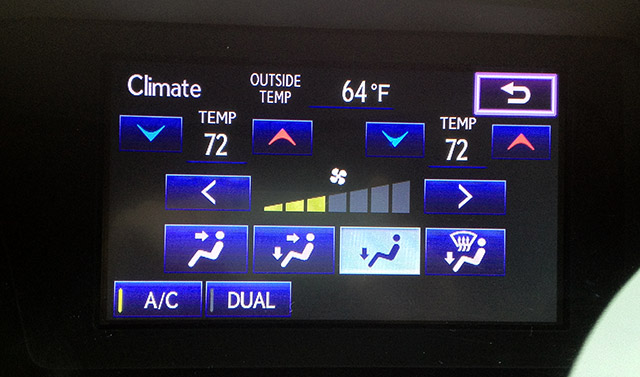 This screen can be used to change all of the climate settings (though you can still use the climate control buttons on the dash).

However, most of the audio controls are now within the display screen: 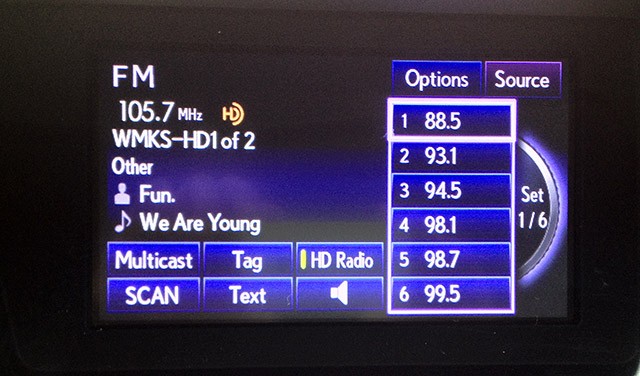 For example, you can no longer select a radio preset using the actual radio in the dash – only via the Display Audio controller, or via the steering wheel buttons. Most of the radio control buttons from the previous ’10-’12 RX are missing from the radio.

(Note: the base RX still has the plain white LED display with the preset buttons on the radio).

Special thanks to Brendan for sending in this thorough description of the new Lexus Display Audio system!

Does the "Lock" button backwards from the audio knob mean that there is an AWD version with center differential lock?

Essentially, yes. You can read about it's operation here: http://www.lexus.com/models/RX/features/performance/active_torque_control_awd.html This is packaged with AWD and has been available since 2010 on RX 350's.
Cool. Don't remember seeing this lock on the European RX AWD i checked out couple of weeks ago. Might just have overlooked it though.

seems cumbersome to use...
so...they created what mercedes has had for years on their COMAND system...
Not sure how I feel about a Lexus iDrive...the climate control looks like a mess to navigate with only a scrollwheel, and the audio looks more complex and involves more submenus than it really needs to.

The climate controls can still be operated through the conventional climate control buttons on the dash. The audio may take a little getting used to, but really - once you have your presets, there is almost no need to go back into the audio screen. The latest audio systems use a set of 6 presets which you can "mix". For example, preset #1 may be FM 105.7, and preset #2 could be XM 105 and so on. Therefore, you no longer have to keep switching modes to get to your different presets. You can simply keep scrolling through all of your 36 presets.