On the other hand, the GS was tops in driver comfort, with better seats. Interior styling was beyond reproach, materials were princely, and the huge (12.3 inches) nav display would’ve drawn raves from Mr. Magoo.

But in terms of sports-sedan chops, two score-card stats stand out. Though the Audi aced the objective testing, the GS got our nod in subjective handling.

Although the A6 ends up first place in the comparison with a score of 221 to 216, a serious look at the points breakdown [PDF link] reveals a match too close to call and ultimately too subjective to matter.

One part of the comparison that’s definitely worth taking a look at is the accompanying photo gallery with the two models side-by-side: 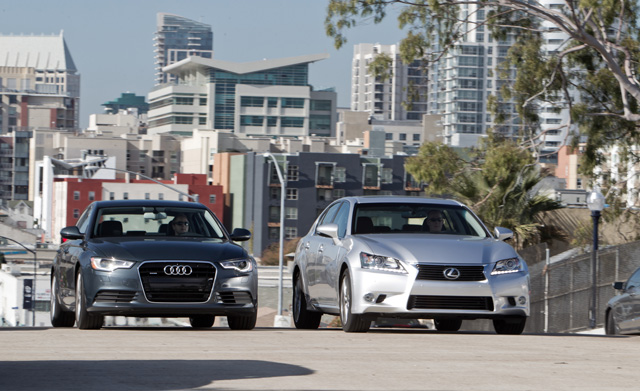 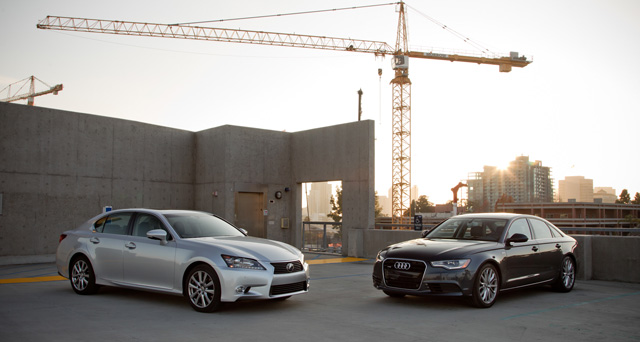 (I’m an unabashed fan of Audi’s exterior design language, but the A6 looks dull next to the GS — have to say, I much prefer the deeper, sculpted look of Lexus L-Finesse.)

Read the Car & Driver GS vs. A6 Comparison

Because Kia Optima & Hyundai Sonata slightly unveiled earlier , people around just always told me , that latest Lexus GS350 copied Korean & bla bla bla ... the front end not bad but for me the CT-ish headlight seems lost something on the GS's character . The Audi A6 here seems slightly dull , but the S6 model won't be bad , although F-Sport can made the GS350 better .
1.  The Audi has zero style.  They praised the gaping hole in it's face? 2.  Why just these two?  Where's the 535i? 3. $7k in options on the Audi. Smells like Audi had a Sport Pkg while Lexus ate cake! Pirelli P-Zeros, 19" vs 18", 255s vs Lexus' 235s? AWD plus a Sport Pkg might be a stacked deck! 4.  The F-Sport still leaves a bullet in the chamber.  This ain't over........ BD

Bullet in the chamber -- nice way to put it! :-)
I'm Black Dynamite.  How else would I put it? Can you dig it? I knew that you could. ;) BD
Many comparison reviews from the major automobile publications remind me of corrupt boxing judges tallying the scorecard for a prize fight that's already been fixed!   It's obvious C&D outfitted the A6 with extra optional equipment in a attempt to skew the overall test results in Audi's behalf over the new GS.
BMW is not in the game because it can't compare. The Audi has beat everyone already. Who's next?

Last year, the Audi beat the M37 by 5 points, like the Lexus, and the 535i by nine points, but this Audi has been upgraded since the, with the 8-speed, 10 more HP and 15 lb ft of torque, making it half a second faster than before. The Infiniti had it's Sport Pkg/20" wheels, and both the Germans had 19's I doubt Lexus cares how it does against an Audi that nobody buys.  The sales leaders are the 5 and the E.  These are the only measuring sticks in this class...... BD

Oh I think Lexus cares very much about how it does against the A6. If I remember correctly, the A6 is the global sales leader in the segment. So with Lexus' new orientation away from solely the US and towards global presence, Lexus should at least take the A6 serious.
I'm not sure you are paying attention to Audi as they are taking over the luxury market but you will... One day you will hav no choice.
The A6 only sells in Europe where it is protected. In other parts of the world using a free market, the Audi is unpopular...

Why does Audi sell so weakly in the US?

It all stems from Audi 5000 unintended acceleration incidents in the 1980s: http://en.wikipedia.org/wiki/Audi#Audi_5000_unintended_acceleration From the article: "Audi's U.S. sales, which had reached 74,061 in 1985, dropped to 12,283 in 1991." That said, the brand is really coming on strong, and I don't think it will be long before they're neck & neck with BMW, Mercedes & Lexus up at the top of luxury automotive sales.
The Audi 100/200 and the A6/A7 is actually a stretched platformed VW Passat, in the same way that the Lexus ES is a Camry. To make the A6 more premium, Audi uses AWD and a supercharger. Consumers kinda know this, hence the A6 has limited popularity...
Not anymore , new Audi's have their own platform except for the tt,a3 and q7 i think

To me, this test doesn't do it. AWD against RWD, different wheel sizes etc. Plus, I really don't get why the ergonomics of the Audi should be better? The Audi has about a thousand buttons, and it takes a lot longer to figure out how that car works (navigation etc) than a Lexus.

I seriously thought about breaking this review down and pointing out all the flaws, but then I remembered -- it's Car & Driver.
As a product specialist for Lexus I would more certainly agree (the bias aside). I have had training in every model of this segment and, for the price, there is nothing that can really compare with the GS as far as Luxury, Convenience, and Performance goes. Sure, one could buy an M5, S6, or E amg (if that even exists) but one thing still stands out in my mind; for everything one can get with the GS for its price, even in the F Sport (damn I wish it had an engine), its top of the line.
We are all Caucasians by majority, hence there is still a lot of Europhilism around. True, Lexus could have done a better job with the new GS, with better styling, more space, and an 8 speed gearbox from the LS, and until they do so, they won't be able to stamp that Europhilism out. Toyota has actually done a better job with the Camry, than Lexus has done with the GS. I actually own 3 Lexiis myself...

Audi's look downright dull when you take away all those LED lights. The GS has much better lines and would still be a stunning car without those LED's.
The GS350 easily outclasses the bland & heavy Audi

From the front. From the front, the GS is much better looking than the bland mouth, sad ugly eyed A6. However, from the side, especially the C pillar, and the tail, the GS has done badly; it looks confusing and bland at those angles.
Not true at all Peter. The Lexus GS looks like something you would find on a Playstation video game for kids. This is supposed to be a grown mans car, not a kids. The A6 is mature, not bland. If you go look at a Prestige Package A6 with the "S-Line" body kit, you can not deny that the A6 kills the GS is style by a mile. Look, I realize what site I am on but Lexus has done exactly what BMW has done; they have had better days. Now, it's Audi's time.

Audi is crapt in terms of reliability.   My brother traded his 2010 Audi A6 after a year due to mechanical and electrical issues.
Copy of the Letters to the Editor e-mail I sent to C&D: to editors It would be nice to see BOTH cars come with a Sport Package, before you pass judgement on what's what in premium sports sedans.  The Audi had AWD, a Sport Package, and 19" Pirellis, while the Lexus, on standard 235/18's, ate cake when it came to dynamic upgrades.  You can't exactly call that a fair fight, can you?  Hopefully, you can give GS F-Sport a fair shot at the German's Sport Packages before you cast it down with the sodomites.   This was more of an hors d'oeuvre, not the main course we were waiting for.  Here's hoping your best is yet to come...... BD
Quattro vs underspecced Lexus and the Lexus still wins the subjective battle, where it counts BTW! Audi mechanicals are a nightmare! Ask about their direct fuel injection issues with valves  covered in gunk and having to have their engines torn down and cleaned out by hand.  A problem that has been going on for years and NEVER ADDRESSED BY AUDI!

The GS performed better where it actually counted it was better driving in the real world, better interoir, better MPG yet somehow it didnt win ... the GS also didnt have the same level of stuff the tested Audi has...  stop with this half ass test ! The GS should have came with the 19 inch bigger wheels and better tires with the better suspention. Not to mention the Lexus even looks better where the Audi already looks dated.
How can they even begin to compare the Audi handling with the Lexus.  I recently rented an A6 whilst in Germany and it's handling was rubbish.  The turn in was soft and mushy, forget having fun on twisty roads, it did nothing to inspire driver confidence. The thing wandered around on the autobahn like a lost sheep compared to my 06 GS which is rock stable and practically drives itself in a straight line.  Audi must have sponsored the article.

Please don't compare a rental car to a privately owned vehicle. Rental cars suffer through all sorts of abuse and even the most basic maintenance such as TIRE PRESSURE might have been ignored, hence the poor handling you experienced. European reviews always praise the stability and handling of the A6, even in FWD guise. I travel to Europe on business at least three to five times a year. I also rented an A6 2.0 TDI (FWD) in France two months ago. The French highways are limited to 130 kph but I found the car to be stable and solid and feel safe. Rent from Europcar next time you're in Europe. They've always served me well.

A heavy AWD Audi A6 vs a nimble RWD GS? Since only the AWD A6s are sold in the US, they should have included an AWD GS. In this case, the GS will feel more nimble because the Quattro system of the A6 adds weight and will dull the sporty driving experience a bit. The average consumer out there won't care about driving in a sporty manor with these cars in the first place. These cars are bought for luxury and design and image, not for handling.
The car sucks.  Get over it....Lexus has yet to build something worthy of an enthusiast.  Why is their a Lexus Enthusiast site, anyway?  Thats like having a site for Enthusiasts of being in a catatonic state....
Driving the NX 450h+