It was only a matter of time — here are photos from the first known crash of a production Lexus LFA: 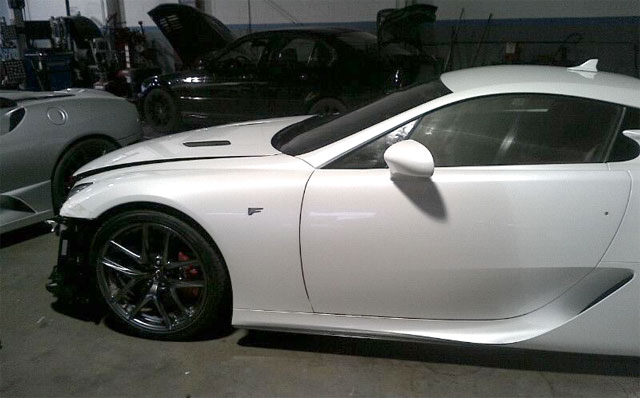 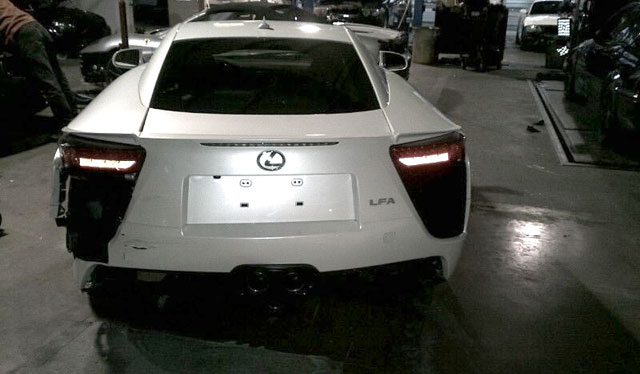 Details are sparse, but the sleuths over at Club Lexus have determined that this is LFA #142, which was originally delivered to Lexus of Orlando.

According to CarFax, the accident happened on October 8th, 2011, after which the LFA was picked up by Howard Brown & Sons Auto Sales in Sun Valley, California before ultimately being sold in Texas by Expo Motor Cars.

As for the damage itself, I can only assume that the accident was in traffic — both the front and rear of the car appear to be affected, which suggests the LFA was sandwiched between two other cars. Regardless, it’s not a pretty sight.

This LFA is sold already. Even wrecked LFAs get sold quickly.
Someone already beat me to it?! Should I be proud of the LFA?
shooting games online    I could tell how great you are in your field of interest. You could relate in each detail very well

I just died a little bit inside...

This LFA is sold already. Even wrecked LFAs get sold quickly.

Thank you for sharing this article. I love it. Keep on writing this type of great stuff.
Paris Hilton?

I thought Paris as well....her interior is blue and this one looks maybe red. Really dark shot though. So sad.....I would not have wanted to be the other two drivers involved.
No

What was the record?? Blue LFA is the European press car. Is there any web page to confirm this??
Hi, sorry for the late reply. The record I referred too was the 7.14 run set by Mr.Lida on sept.02.2011. This you can find going thru the LFA messages. The blue LFA was one of the cars that were there for people to drive, some were Euro spec, others USA spec and right hand drives for the australian and Thailand customers. The blue LFA had hit the rail on the right hand side and was taken away on a recovery vehicle.I do not think the damage was that big but enough to take the LFA home.
Are you saying Akira Iida set a record in the blue standard LFA??
Im sorry if I was not clear on this but the record set by Mr.Lida was in the Gazoo race LFA.

Hope the people who sandwiched the LFA had insurance
That's just disgusting..poor car.
http://youtu.be/FAvtDqBtsCU Video of the Car.....
I wonder who's at fault.
Oh, my heart is bleeding, when I see such a beatiful cars crushed!
NOOOOOOOO Such a nice car wrecked.....the agony
Updated to include the video from @twitter-361330324:disqus .

Make sure you update the Badge info to LFA #142. On your video update ;)