Just hours before its debut at the Detroit Auto Show, photos of the 2013 Lexus LX 570 have been posted on VWVortex & Club Lexus: 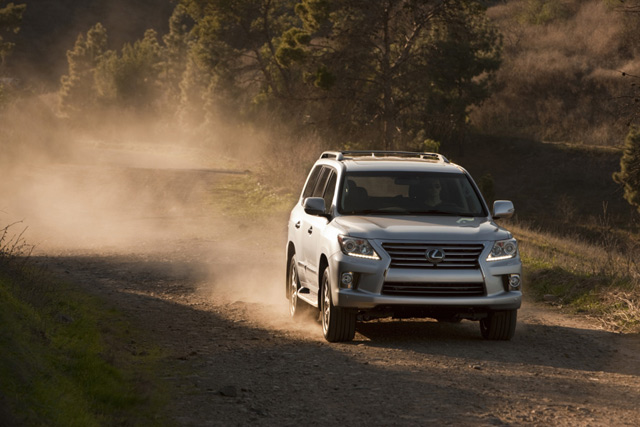 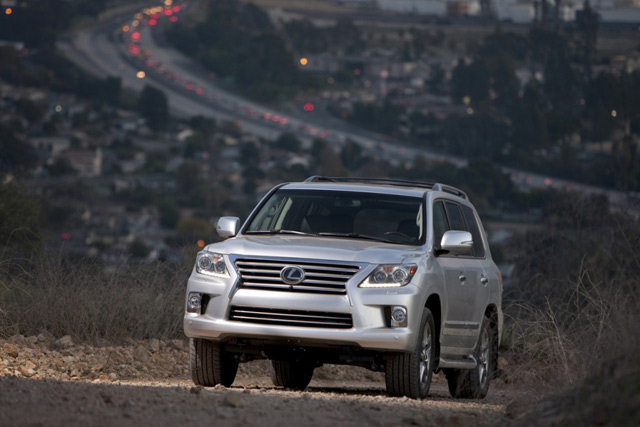 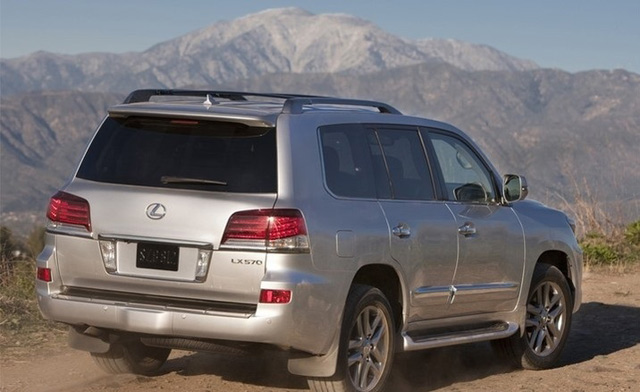 The most prominent exterior change center around the front of the vehicle, with the LX getting the new Spindle Grille design along with LED daytime running lights and a new bumper.

Other exterior changes include:

The interior has also been reworked: 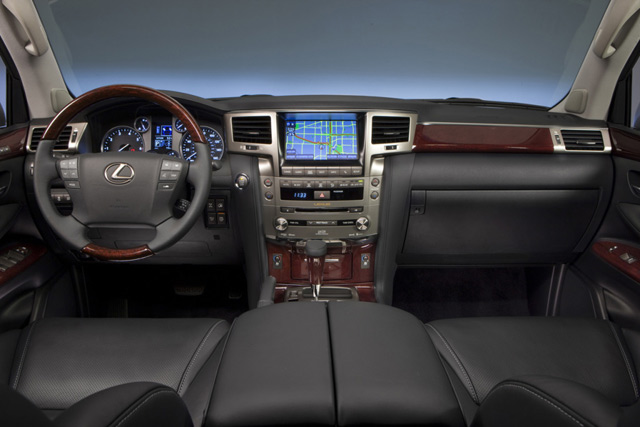 The instrument panel has been redesigned, and now includes a new color information display between the dials. There’s also a dark chrome finish around center console and chrome highlights above the glovebox. More functional interior improvements include driver-side Easy Access (which retracts the front seat and steering wheel during entry and exit), and a 120-volt power outlet added for the middle row.

I’ll have live photos for you tomorrow from the auto show floor, but judging from these photos, the Spindle grille really scales well with the super-sized LX — I would have liked to see more changes to the interior, but just simplifying the number of buttons on the center console was a step in the right direction. and I like the look of the new instrument panel.

I dont know, i think the grille should be smaller, it appears proportionally too large. idk not a fan right now, but maybe better in person.

I find ALL Lexus vehicles look much better in person & I've seen many others comment the same as well on here.

A true beast. A more grown up look. More modern and really does look like part of the new Lexus revolution.

I agree !   I like the new modern enhancements....this is truly a powerhouse Beast and so functional and bautiful. I am  fan of all the little refreshes, however, really looking forward to cutting edge new generation.....this LX  model as is the LS flagship, to me is one of the most important in the lineup.....much needed turn signals and in need of the brighter blue HD or LED front lamps......a bit dissapointed that the front lamps weren't refreshed. This priced vehicle needs them badly. I would also like to see more definition and beefier wheel wells from the past years. Please bring back the third lamp thin strip red stop lights from previous generation LX models that made it across the rear window......so classy....bring them back LEXUS---Please!  I see so many of the older models and they are such a class act.

Front end looks like a grown up Lexus GS now . XD
@K@Krew:disqus  I love this interior.  I like this more than the new GS and think this sets the new benchmark of Lexus luxury.  The center armrest is like the nicest leather couch you could have "even in your home."  The leather wraps around you evrywhere too, the way I think Lexus should strive to be.
I prefer the current LX. Although the redesigned upper portion of the spindle grille makes this version look way better than the australian version, I don't like the side mirrors, side moldings, and rear tail lights on the 2013. And I hate the twin 5-spoke wheel design. The 10-spoke wheels looked way better in my opinion. Screw it, I don't like the 2013 model. Current LX looks way more sophisticated.

I agree on some of the points that you made as I myself kind of liked the understated look.It looked more square & like a truck,but never looked out of place if you took the family out to dinner at a nice restaurant either.A saying that illistrates this well is that there's no such thing as bad weather,just bad clothes & the LX always illistrated this beautifully.No matter where you take it,it always looks at home.This spindle grille certainly does look better than the Aus. version!Everything else for the most part looks good to me for the most part.Ithink it will just take some time to get used to the new look-we've only just seen it now for the first time remember.At least this new look will delay this model from becoming long in the tooth as this model has typically gone a very long time between totally new models from the ground up.The tail lights,I really like.I find they have a more understated look & now the LED lighting streams accross the whole lens on ALL sections.(there was a part of the tail light on the the outgoing model that had a 'blank' space that didn't light up or do anything at all.)I think they accomplished this beautifully!The only thing I really don't care for is the new side body cladding.It's some what like what GM was tacking on the sides of all their trucks a few years ago & looks less elegant in my opinion.

Whoa. aha It looks stronger. There's the necessary upgrades. Hmm... It just needs a total redesign NOW! And hopefully, Lexus takes it seriously! No more sharing body panels with the Land Cruiser, as great as that SUV is!

Yes....it does look stronger....I too looking forward to LEXUS seperating itself further from TOYOTA style and share of sheetmetal......tired of people expressing the LS looks like a Camry stretch......the next Generation LX and LS need to be unigque and unlike any other.

Lexus have really gone too far with the spindle Grille.........it looks even more ridiculous than a Peugeot's gulping mouth.......if anyone says that Infinity makes melted cars, than Lexus have gone into making squeezed cars............

The LX already had a front facia that wasn't that different from this revised version.I don't know why this update is such a 'shocker' to some people!?
Every company has a design langauge. It's nothing new. Infiniti has their melted pot look, Lexus has their spindle grille, BMW has their agressive clean sheet look, MB has their clean cut look and so forth establish by the head cheif every 5 to however long they desire years, months, day....
I don't like the design language and build quality of Mercedes
I have an E350 Convertible which is built just fine. I've owned Benzes for years and the build quality was always top notch for the most part.

I was hoping for more.. this is just a kind of facelift.

That's exactly what this is.A facelift...,a refresh...,an update...I thought we already established that.

The only thing I'm surprised at KREW is that they continued the digital clock instead of the new analog clock from the new GS.Speaking of the GS,I find that the more I see it,the more I'm falling in love with the new look.Some parts bold & some parts understated.It's a nice combination & I like it.Back to the LX,I'm seriously considering one as a winter/family vacation vehicle.I am aware that this type of vehicle is not the fasionable trend that it was 10 years ago,but living in Nova Scotia & being a family of 5(7 if you include our 2 Border Collies)It looks like it may be the right vehicle for us,not as a daily driver,but as an extra vehicle that serves certain purposes.

I can't think of a more suitable vehicle for you, really. I was expecting a little more from this update, particularly in the back. The front looks fantastic, the interior is phenomenal, but for some reason, the back just seems a little lackluster to me, as opposed to the rest of the aggressive styling.

The spindle grill looks better than the GS since the middle edges dragged lower and is better proportioned.
Looks good...liking the bold new front grill.  When is the LX supposed to get a full update?

While lexus usa hasn't updated the site, I noticed that they got rid of the F sport rims.  Why?  Too expensive?

The doors have additional wood trim around the window switches & the temperature switches have red/blue markers instead of plain white...
I like the new grill! Tip of the Hat But still no HID's? Wag of the Finger
One of the best interior on sale right now. Looks great but I feel some bigger better wheels would really set it off.
Inside a little better, outside a little worse. I really don't like the wheels AT ALL. I was expecting more since they are skipping a whole model year. I hope they improved the 3rd row seats at least. All in all I'm dissapointed.
I like these white/red tail lights a lot more than the all red/yellow ones!!!!

I just saw the 3rd row seats and they are the same :( They also reduced towing capacity from 8500lbs to 7000lbs :( Still no HIDs with AFS :( I do like the tail lights :) I hope they will offer more than just 2 interior colors.
I stand corrected; now has HIDs! Don't know about AFS though.
My opinion, the facelifted LX570 looks good - i like it. However ... still waiting for Lexus to drop the awesome twin-turbocharged 4.5 v8 diesel (as per the Landcruiser) into it which i believe will broaden the appeal of the vehicle in markets such as Europe and Australia. That to the side, the LX570 looks OK !
Driving the NX 450h+