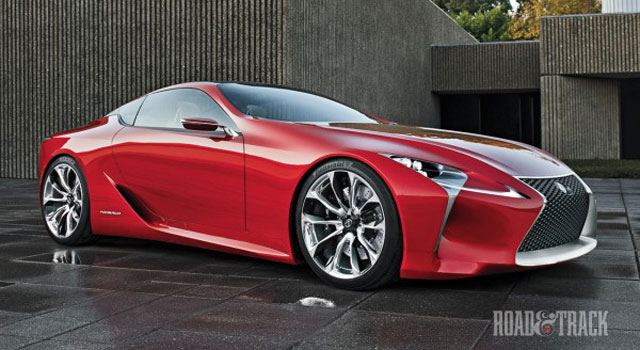 After accidentally leaking a video of the Lexus LF-LC concept weeks before its scheduled reveal at the Detroit Auto Show, Road & Track has followed up with an exclusive pre-show feature about the Lexus concept, with early photos and details — first off, a couple more photos: 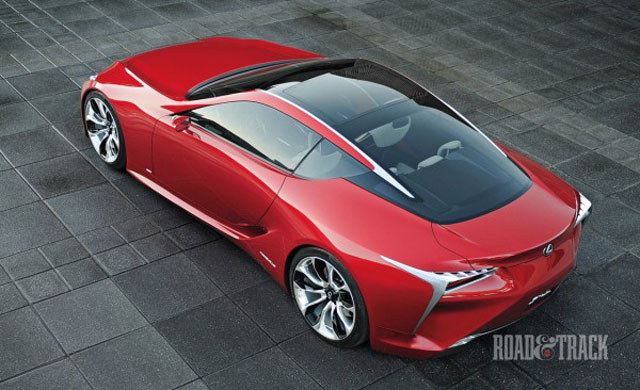 The article focuses on Calty Design Research, the Toyota design studio responsible for the LF-LC design:

Kevin Hunter, president of Calty Design Research, noted that they were given a clean sheet of paper to design the LFLC. The mission was to come up with a new 2+2 hybrid coupe concept to redefine Lexus’ future design language. Only a few written attributes were given as criteria: avant-garde beauty, originality, driving joy and unequaled technology.

The work on the LF-LC began in May 2010. As with any car design, the folks at Calty looked for inspiration. And they found it in nature, in the form of a tree leaf for its complex shape but also its flexibility to be sculpted into various flowing forms.

Also included is a selection of design sketches from Edward Lee, one of the chief exterior designers:

Last but not least, there are some photos of the interior, including this astounding photo of the LF-LC’s instrument panel: 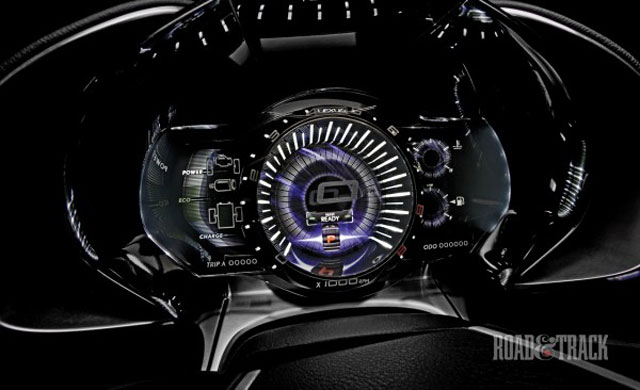 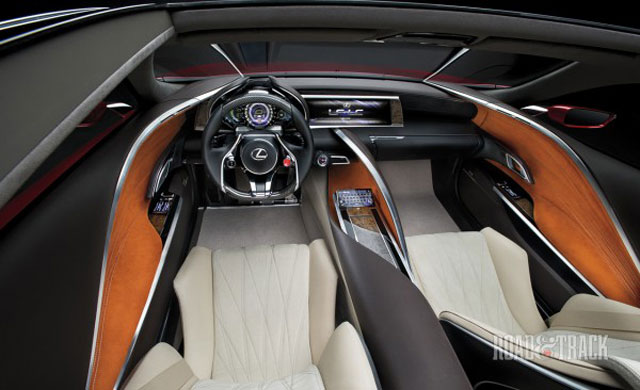 With all the buzz at the end of last year, there was certainly a feeling that the LF-LC was going to be something special, but this is absolutely extraordinary — head over to Road & Track to get the full story and check out all the photos, and I’ll waiting here trying to catch my breath.

The beauty! The familiar yet unpredictable nature of the design is so... WOWOOWOWOWOWOW!!!
holy mother of god
This should be the next SC please lexus let do Justace to all the Ranges,but GAWWWWDD DAMMMN this Concept is HOOOTTTT like Red pepper !!!
Not really impressed by the design. I would rather want to see a really good looking IS concept.

Aw Really?! Too much familiarity for you? aha This might just be an IS concept! http://www.facebook.com/LexusandThePursuit/posts/214811845271266
It's not a big challenge to design a good looking sports-coupe when room, luggage volume etc. is not an issue. I also think the car is somewhat uninteresting from the side profile. That grey stuff around the rear-lamps are just hideous and gimmicky! To me Lexus are and should be somewhat conservative. Go to far, and they end up clown-mobiles or pure ghetto-boy racers.
Nah! Conservative is all they've been for most of their lifetime! Stuff like the first SC and the second GS; when they were introduced to the world, they were just out of the world! Even though the GS had quad headlights like the E-class, its glossy body and bright headlights were out of this world! And besides, the Corvette can carry golf bags. If this Lexus doesn't have too much mechanical stuff in the rear, it shouldn't have a problem carrying luggage either! (There's always the back row seats too!)

Wow! Side profile is simly stunning.
It is a nice post. Thank you. (exhalation)
Wow! This is incredible.. Lexus is gonna seriously own these upcoming years!
We're Back!!!
very cool post)))
hmm...i see a jaguar-ish  red button on the steering!
I love this concept car it's hard to explain the beauty of it.
it looks awesome but looks like the LFA...

Why is that a bad thing?

UNBELIEVABLE-----really shows the styling que from the LFA----this will be a hit if it does make it to production and I would bet my life it does.  LEXUS is not waisting time now and they mean business like we have never seen before.....I am glad to see the fight to maintain their status. LEXUS KEEP IT UP !
I hope they can keep the pricing similar to the 911 varients (Targa, Turbo, Convertible, etc.). I would love to see this on real-time roads and neighborhoods like the prolific 911 (I don't know if I'll ever see an LF-A outside of the Auto Show circuit).
I just may leave the GS family for this car... Yes tons of LFA in the design "I also see Ferrari" with very agressive sharp lines.  Hopefully cost isn't throught the roof...

Actually,with all due respect,I believe you'll see Ferrari ripping off design elements from this & the LFA.The NSX & LFA have knocked the Italians off their feet before.So much so,that the designer of the Enzo was Japanese,not Italian.His name was Ken Okuyama.Case in point,the europeans hate being beat at their own game.