Upon learning that Lexus was planning to cancel the much-maligned HS 250h, some readers suggested that the model be converted into a CT sedan — interestingly, photochopper Theophilus Chin tried that something very similar a couple of weeks back (click on any image for a larger version): 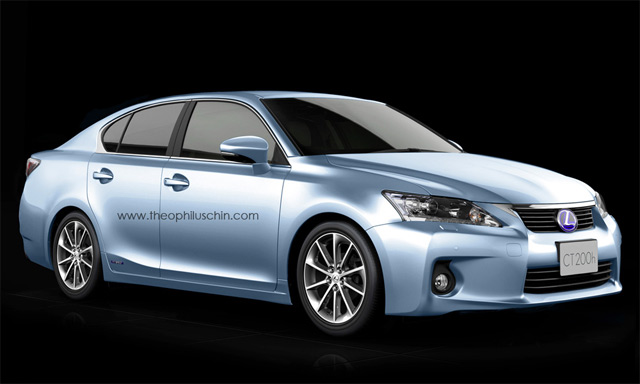 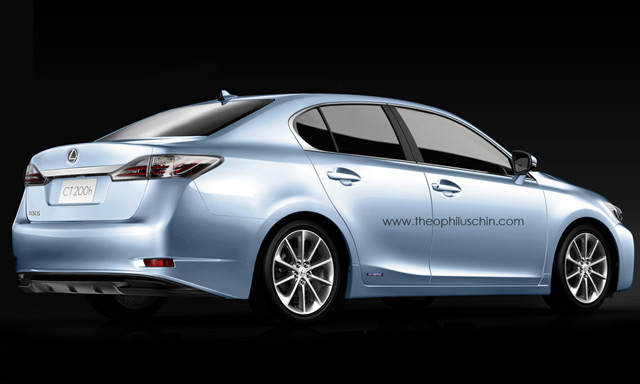 I’ve never really liked the idea of a CT-sized sedan, and these photochops illustrates my biggest issue — it’s just too small. The size is especially noticeable in the side profile, which has a nice upper outline, but the entire design falls apart with the super-small wheels and super-short wheelbase. It’s totally subjective, but when it comes to sub-compact cars, I feel sedans rarely look as good as hatchbacks.

(I suppose it’s possible the design might work stretched out to HS proportions, but I have to think Lexus has more important things to focus on than a segment better served simply with a ES hybrid.)

It would look a lot like the GS sedan BD

I've never liked small sedans, so a CT sedan is a no for me..
Get him to work on a convertible instead!

Still not-so-good , Lexus's style never really fits on small cars ... even I'm a Hatch car fellow , but I never found CTh looks good to me ; anyway CTh & GS would looks a lot like in Sedan form because GS have many design clue from CTh , and CTh-F or CTh-C would be much better choice , Lexus please made the FIRST Hybrid Hot Hatch & first Hybrid OpenTop Hatch !
CT should remain an hatchback. End the HS and simply create a CT250h and that's it.
Thanks for sharing this information.
Lexus great car!
Even though many of the comments around here seem to disagree, a CT sedan could be an interesting proposition considering Audi will soon launch the next-gen A3 in a sedan bodystyle in addition to the traditional hatch. A CT250h sedan could do very well in sedan-loving America and Japan (which was the only place the HS was at least halfway successful IIRC). For us in Europe, just give us a CT250h hatch!
It looks to much like the GS and would destroy the exclusivity and appeal of that car if it hits the market. Don't build it.

You know, I was so focused on how awkward the photochop looked, I didn't even clue into this point, which I think is much more important than the size. Execellent observation.
The same sausage in different sizes approach works pretty well for the Germans, so why shouldn't it for Lexus? This car could capitalize on the resemblance to the more expensive model. This is called brand recognition. Moreover, you can hardly speak of "exclusivity" when you are speaking of a midsize luxury sedan like the GS. They (especially E-Classes and 5 series) are all over the place!

whatever good or not you liked or not but it is still far away better and handsome than that awkward deleted HS just make it on  FT-86 chassis to make LEXUS as a separate brand focus on the RWD  i guess if that comes true , LEXUS will get another winner in EUROPE
Neh, I'll stick with my hatch.
That's a fail, I would think twice about buying the new GS if this was to happen.
I hope this does not happen. Ending the HS is a great idea, but leave the CT alone. Lexus's focus right now should be on expanding the GS lineup with a coupe, and more importantly, a V8 GS-F. I can't understand Lexus's obsession with hybrid everything.

Not to mention how similar this mock-up is to the GS. No, no.

Ok, now we're talking. Great idea!
Definitely.  I looked at this Photochop and immediately thought "no, but a 2-door would be interesting".

I hope Lexus doesn't follow BMW, Audi in creating these small, cheap, ugly cars for sake of market share.. I hope Lexus improves their core products (RX, LS, IS, GS, ES) and give us small sporty, coupe's and other unique cars SC600? GSC? The only reason German companies create so many models and variants is because their core products aren't as desirable as Lexus core products, X5 or X3 vs RX.. RX is much much better as it is smoother, better looking, more refined, better looking, more reliable, dyrable & better resale value..and let's not forget the incentives and discounts the Germans have all year round.. Lexus have the smallest incentives in the market, just proves people desire Lexus..
CT is an ugly car imho far to bulky - you can't call it elegant.  Made a nice job of the interior though- looks okish as a saloon but its pointless the difference in usable space between that and IS must be minimal. (despite dimensions)  I read that the ride is prettt poor as well unless you go for 16" wheels. Slow too!
I love the CT hatch. The sedan looks errr.... let's be kind, out of place. The CT should remain a hatchback. And, don't axe the HS. The problem with the HS is the fact that its market is constrained to North America and Japan. They should really release it in more countries, especially in Europe where environmental measures is important. It's a fantastic car, albeit not the best looking Lexus. Give it a body, give it a more powerful version of the Camry 2.5L I4 then enhance drive and it could sell well in Europe and Australia.