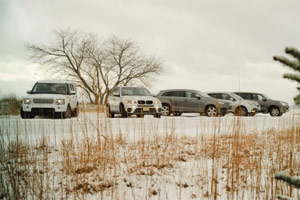 Given that the GX 460 is only SUV here riding on a truck platform, it starts off with a strong disadvantage in the handling category, and this ends up showing in the results — the GX finished last in the comparison.

This post seems familiar... deja vu? And the LR4 is surprisingly light when compared with the GX, even though the LR4 has a body-on-frame AND a monocoque chassis...
And in typical Car and Drive fashion, they ignore the intended purpose of the vehicle by assuming no one will drive them anywhere but to Starbucks and then rate there merit almost solely on how well they will do on a racetrack. These "professional" auto reviews are becoming more and more irrelevant.  Try living with the Audi and the Lexus for 2 years, and then see which is the preferred vehicle.
How do I edit; I meant "their"

Dang, I also meant Car and "Driver"
This comparo is several months oldBD

With little new Lexus news to speak of right now, I'm going into my archives -- I have a list of over 500 articles to go through. :-)

I think we all need to look more at the American Cars and stop supporting other countries.  I bought a Buick Lacrosse CLX (top of the line) for $36,000 and it is way better than most of the Lexus models and cheaper the car is so quiet, looks great for any age and is very luxurious,  i love the radio rewind (like your DVR) feature. wake up people

Think you are trying to convince the wrong set of people here. You do realize this site is called LEXUS Enthusiast
Part of the point of being American is having choice. Think of it as having the freedom to choose what you want to drive. That freedom should not entail only being able to buy a Chevy, Ford or Chrysler. Some of us also choose to drive vehicles from companies that don't require bailouts or corrupt unions to continue functioning. You know, like how capitalism is supposed to work. This doesn't even get into the fact that companies like Toyota, BMW, Hyundai, Volkswagen and other "foreign" companies have come to America, built huge manufacturing facilities and provided jobs for Americans. They've invested in America while other supposedly American companies are shipping jobs overseas. As for the Buick Lacrosse being better than most Lexus vehicles--it's obvious you've A.) never driven a Lexus or B.) are just making things up. The Lacrosse is an admirable effort by Buick and vastly superior to previous products from GM. It's also still a very new model--how will its reliability and quality hold up over 5, 7, 10 years? If it's still running like a brand new car 10 years from now at 150k miles...then you can say it's matched Lexus quality levels. As for initial quality, it may very well match or exceed the Lexus ES in some ways. It's also a newer model with newer technology. Looks are subjective and IMO, its styling is frumpy and unattractive. Sit in your Lacrosse, and then sit in a Lexus LS--and you'll see what true quality and refinement is. Buick still has a long way to go.
Just think...$4k more, you could afford an ES        You are exactly right, American cars are great now...too bad they took your money 10 years ago and gave you crap and cheated Americans.   So what you are saying is you are giving money again to the same company that screwed us over in the past.

I just finished a cross country drive from South Florida To Yellowstone. We left via Montana. 80 hours of driving in my GX 460 round trip.  Lite snow in the mountains of Yellowstone. My wife and I shared driving.  In fact, we drove strainght home, 38 hours drive time.  My GX 460 was just perfect. Averaged just over 21 mpg for trip.  Did I mention my GX 460 was perfect!!

I drove to yellowstone in my 460 was well. It was awesome when we hit the bumpy roads, but when it came time for uphill roads and twists the GX was a big letdown. Wasn't much power in going uphill in yellowstone had the throttle almost floored.

i take my gx470 on the fire trails above big bear, ca. what i've been able to do/climb is amazing. on one occasion i was perched on a ridge overlooking a tour line of jeep's and fj's. when they saw me up above them they stopped. 2 tried to climb the rocky run-off up to the ridge but quickly gave up. if you're into doing this with your gx try the hankook tires. btw - my sister has the audi and the landrover. i've driven both. no comparison, the gx wins easy.
In europe GX it's called  Land Cruiser 150  , and  it's a tank on weels , we all know what Land Cruisers can do , they are just THE BEST!  ,which makes GX even better .  I wonder why They compare SUV's like Q7, BMW5 they were build for diffrent reasons,   they are no match for a REAL TANK on weels .