The wildly elaborate custom Lexus LX 570 Invader by ASI made its UAE debut last week at the Sharjah Auto Show: 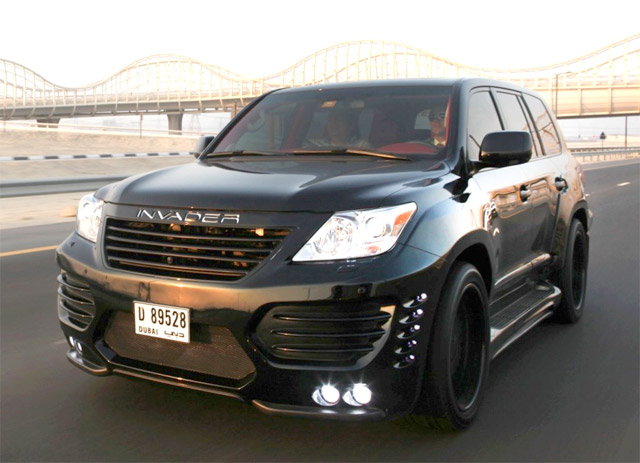 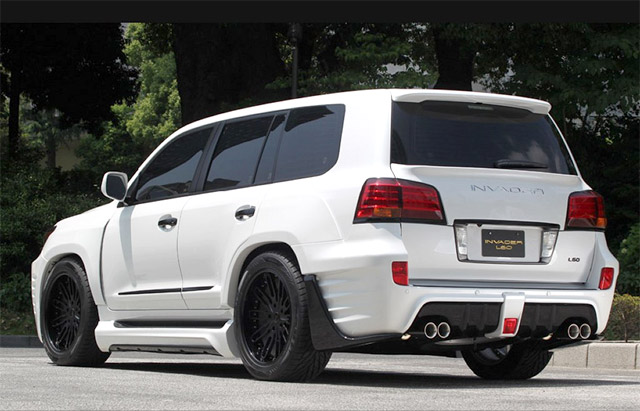 Just check out this interior: 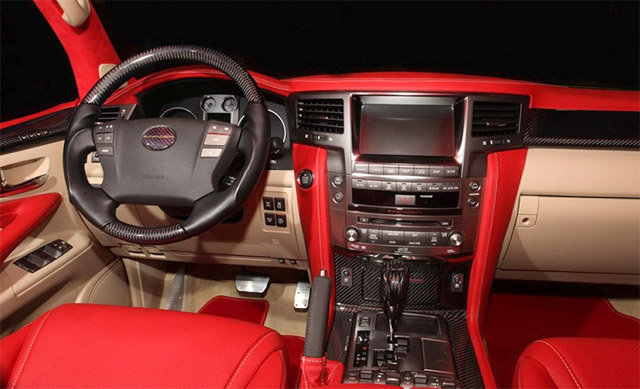 [Other features include] a carbon-tipped performance exhaust system, a lowered manually-tuned suspension setup that kill offroad ability, a heavy-duty brake system, forged 22-inch wheels, and a customised interior that seems to only consist of mismatching red upholstery bits on the stock beige cabin, with red seats, dash, armrests, headliner and floor mats.

…ASI will only manufacture 100 of these vehicles. They will be sold in the UAE and possibly in Saudi Arabia via local Invader dealers, with prices approaching Dhs 1 million each.

If my conversion is correct, that’s about $272,000 USD, which is a hefty price to pay — however, judging by the amount of emails I get from the Gulf States regarding the ASI Invader, generating sales shouldn’t be a problem.

Nice! I like! They were very thorough with the interior too! Thumbs up!
btw, a few things to note - leather on top of dash with contrasting stitching - NICE - red headliner with contrasting stitching - also nice Something tasteful still needs to be done about the area surrounding the window switches though. If this were the 2nd-generation LX, there would be wood, which means ASI would've had to put carbon fiber there.

How can I get this car now any help

@WorldofLuxury: I've never understood why Lexus didn't go ahead and put wood around the windo switches. Maybe they're saving that for a mid-cycle update. And I like the leather on the dash, I wish that was available on the regular LX (but in a normal color of course).
That car has declared war on subtlety!
@James: I'd put leather on the center of the steering wheel too lol But most importantly, I wonder if the airbags still work properly for the driver and the front passenger.
eh i'm not fan... to busy for my tastes. I do like the HP gain though...
@WorldofLuxury: Yeah, leather on the center part of the steering wheel would look nice. I would think the airbags would still work. Why wouldn't they?
They sure have a lot of money to spare in UAE. Picking up an LFA shouldn't be a problem for them.
@James: added weight - Lexus goes as far as to mentioning that nothing should be in the way of airbags in their manuals with clear pictures denouncing the placement of a cane in front of the glovebox and even a sticky note on the steering wheel.
Would it better than LFA ? XD Not really like the look but I love it in White ! Interior is bit fancy , maybe because of too much Red .
@WorldofLuxury: Yeah, that makes sense I guess.
who write such commnts never buy sam class cars, let's go to work.