END_OF_DOCUMENT_TOKEN_TO_BE_REPLACED " /> Next-Gen 2012 Lexus GS Mule Spotted! | Lexus Enthusiast
Menu
Log in
Register
You are using an out of date browser. It may not display this or other websites correctly.
You should upgrade or use an alternative browser.

At long last, the first spy-shots of the next-generation Lexus GS have been published after a prototype-mule was spotted in Germany: 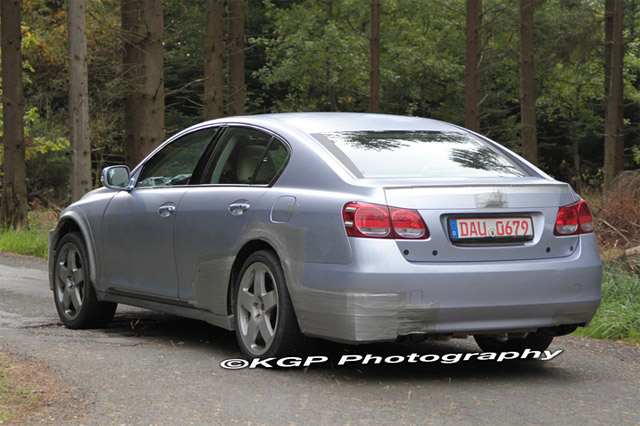 Admittedly, with the shell of the current GS covering much of the action, there’s not much to go on — one thing that’s clear from the taped-up fenders is that the next-gen GS will be sitting on a wider platform, and judging from the wheel placement, it looks as though the wheelbase has been extended slightly. Both of these changes would go far in addressing the lack of space in the current GS.

Along with the spy shots, there’s been some speculation on what might be powering the next-gen GS range, including what might be under the hood of the expected GS-F, but at this point there’s nothing really solid to go on. But, as long as we’re guessing, I’m going to go for: GS 250, GS 350, GS 460h, & a GS-F with a 500hp+ version of the IS-F’s 5.0L V8.

Update: Astute TLE reader Pattebb pointed out that there are two GS mules running around, the one above and another that’s sporting some large exhaust cutouts: 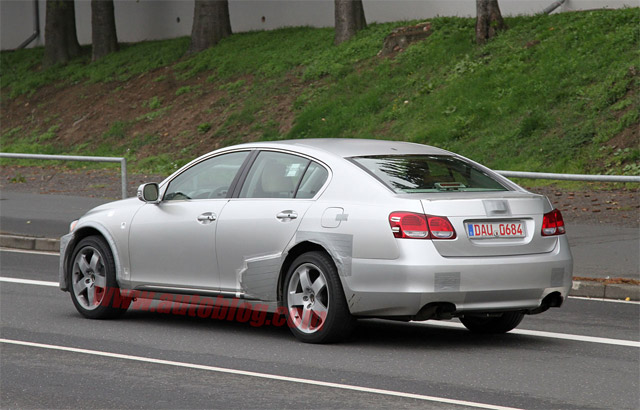 More photos of this second prototype can be seen on Autoblog.

Pattebb wrote:Sorry my fault, it has 4 tailpipes on Autoblog picture, and that car has a different nr plate

Wow, great eye!
500 HP wow! I wonder how much a GS F would go for?
@Joshd: I would think at least $80k, maybe more. I know that sounds like a lot but consider this; the IS F is the same price as the C63 and is even more expensive than the M3, so I would assume it would be the same for the GS F. The E63 AMG starts at $87k, so i'd expect a similar price for the GS F.
Did anyone notice the small indention on the prototype with the exhausts?

Also, I wonder what the four holes on the trunk lid are.

WTH...I never knew IS-F was more than C63 AMG lol, well in Canada atleast..I swear the IS-F was a bit lower in price before or maybe I was seeing things.
@BOSS: In 2008 when the IS F debuted it was only $56k, but it's gone up in price since then. Right now the IS F is more expensive than all of it's main competitors. Lexus IS F- $59k Merc C63- $58k BMW M3- $55k Audi S4- $45k :-)
Where the hell are you getting these numbers? In America, the USA, that's where I live, the price range is pretty much exactly the opposite of your description. Yes the IS-F is $59K but a fully loaded M3 goes for around $70-80K and higher. url comment="#comment-45049"]@James[/url]:
But more importantly: Yes rejoice all, the time has come. These are going to be exciting times if Lexus does the new GS right. It has got to be a new shocker for Lexus, “like it was back in 98'and really make some waves. GS Lover~ 8-)
@Raptor: I was just posting base prices. But besides maybe the M3, the IS F is either the same price or more expensive than the others even with addition options. Fully Loaded Prices: M3- $70k IS F- $65k C63- $65k S4- $64k I know there's only a few thousand dollar difference between all of them, but my original point and the reason for stating the prices, is that the F-series is not going to be cheap and expect future F models to be priced very close to the competition.
I've updated the post to mention the second GS prototype pointed out by Pattebb.
James, I just checked. "A fully loaded M3 on bmwusa.com" I chose the coupe black on black and added everything under the sun and it quoted me $82K. That is actually down a couple of grand from last year. @James:
Hard to guess the pricing of a GS F -- but I'd think it would be competitive with E-Class AMG & the M5, so somewhere between $75-80k USD.

Raptor wrote:James, I just checked. “A fully loaded M3 on bmwusa.com” I chose the coupe black on black and added everything under the sun and it quoted me $82K. That is actually down a couple of grand from last year. @James:

Why are you comparing an M3 Coupe to the IS F? The Coupe is more expensive from the start, and considering Lexus doesn't offer an IS F coupe there's no reason to compare it. BTW, I'm not going to continue arguing with you over prices. All I was trying to say from the beginning is that I highly doubt Lexus is going to price any of their F performance cars considerably less their competitors. Because even if the M3 is more expensive than the IS F, the IS F is still around the same price as the other cars in it's class. What I mean is that its not as if the C63 & S4 are $20k more, there's barely a difference and definitely not enough to change anyone's mind about buying one of them.
the top pictures are of the hybrid. Notice how the rear fenders are straightened out, as seen on other lexus/toyota hybrids
@Josh: That's interesting, and I just noticed that the test mule with the large exhaust cutouts doesn't have the straightened out rear fender.
@James: yeah, im guessing what we are seeing here is the F model and the H model
I wonder if there'll be more than one body-style this time.
Cant wait to c the redesign...There are just testing the suspensions with the old shell on.
Not really, it will be like the IS250/350 with the IS-F looking more aggressive. The GS-F gona look more aggressive than the regular GS
Is-mule spotted: IS mkIII

I really hope they make the next IS available as a hybrid.

James wrote:I really hope they make the next IS available as a hybrid.

If my information is correct:yes.
Lexus Europe CONFIRMED an IS Hybrid when they said that Lexus will be Hybrid ONLY by 2015. I would also expect a GS300h with the same motor as the CT300h and IS300h. The European market will want a V6 equivalent hybrid alongside the V8 equivalent 450h

Wooski wrote:Lexus Europe CONFIRMED an IS Hybrid when they said that Lexus will be Hybrid ONLY by 2015. I would also expect a GS300h with the same motor as the CT300h and IS300h. The European market will want a V6 equivalent hybrid alongside the V8 equivalent 450h

Very good point about the Lexus Europe setting the table for an all-hybrid lineup by 2015 -- also, there was an article (that I can't find) that confirmed that every new generation would be offered as a hybrid.
That is not the NG GS

Someone wrote:That is not the NG GS

Well, no -- it's a current-gen GS that's believed to be sitting on the NG GS' new platform.
Driving the NX 450h+