END_OF_DOCUMENT_TOKEN_TO_BE_REPLACED " /> New Lexus IS 200d Arrives in Europe for 2011 | Lexus Enthusiast
Menu
Log in
Register
You are using an out of date browser. It may not display this or other websites correctly.
You should upgrade or use an alternative browser.

For 2011, the Lexus IS 220d in the UK will be replaced by the IS 200d, which will be using an updated version of the same 2.2L diesel engine that brings better fuel economy, lower CO2 emissions and a more refined and smoother drive:

The new 148bhp version of the 2.2-litre diesel engine benefits from detailed engineering revisions and is equipped with a diesel particulate filter (DPF) to meet Euro 5 emissions standards and enhance the engine’s driving quality.

The changes include a re-shaped combustion chamber and the use of new-generation piezoelectric fuel injectors to give a more efficient, cleaner and complete fuel burn. Pressure in the common rail injection system has been increased. a higher flow exhaust gas recirculation valve has been introduced and the adoption of a new oil-cooled, variable nozzle turbocharger improves torque performance at low speeds and cuts overall engine noise.

Along with the announcement of the new diesel, Lexus UK released some great photos of the updated IS: 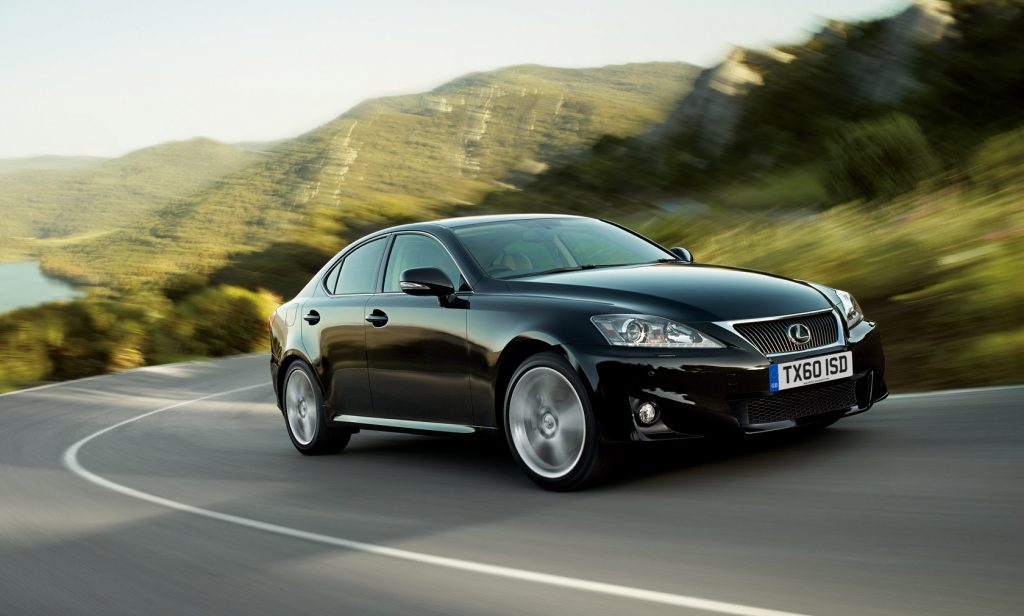 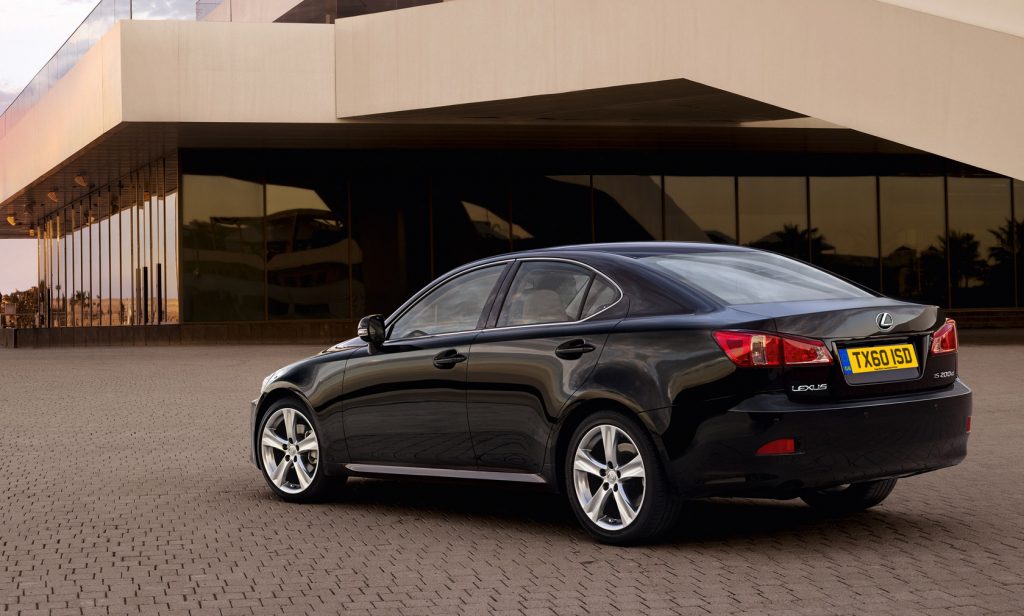 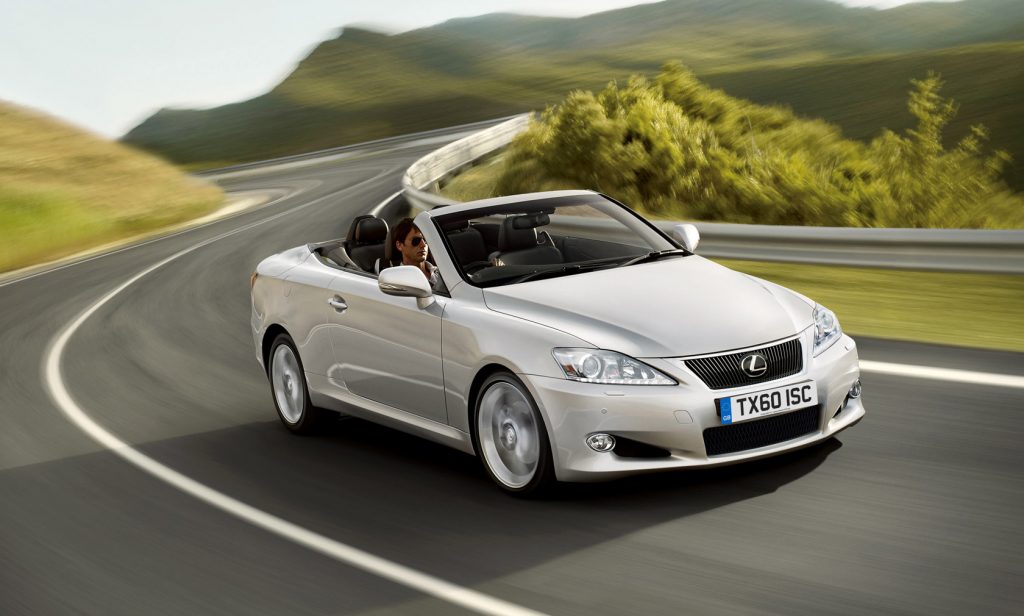 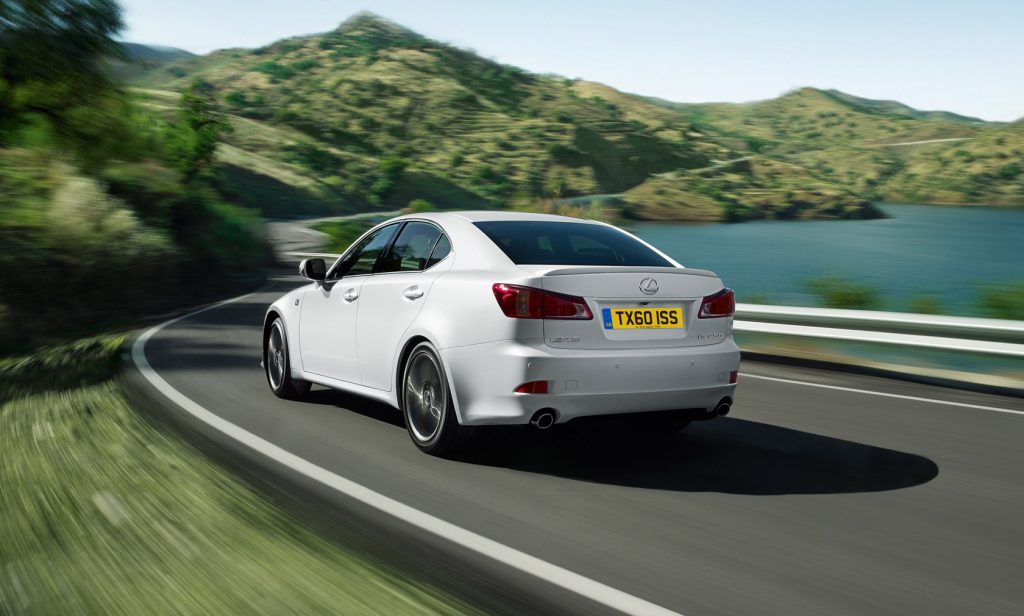 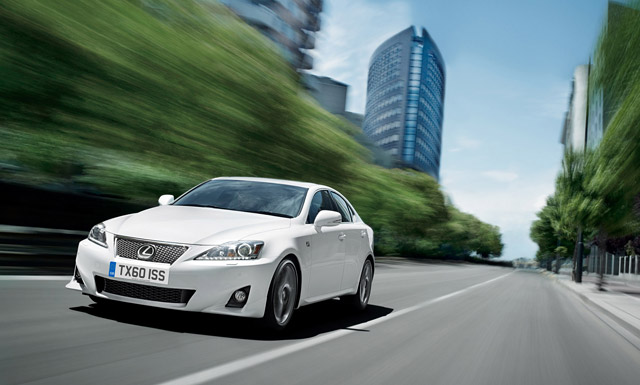 For the full details on all the IS options in the UK, I’ve included the full press release after the jump.

Sporty, smooth and unmistakeably Lexus, the IS has undergone its most significant revisions since the current generation model was launched in 2005.

Changes for the 2011 model year, to be formally revealed at the Paris motor show, are not simply a matter of sharper styling: Lexus has gone to the heart of the ownership experience to make the IS an even more appealing prospect, not least to those choosing it as a company car.

Central to this strategy is the introduction of the new IS 200d, which delivers improved fuel economy, lower emissions and reduced tax bills. Replacing the previous IS 220d, it is available to order now, priced from £24,350 (IS 200d SE) on the road.

The V6 petrol engine featured in the IS 250 and IS 250C coupe-convertible with six-speed automatic transmission has also been revised to meet future Euro5 emissions standards, achieving better fuel economy and CO2 emissions with no penalty in performance.

Focus of the styling changes is the F-Sport grade, which now echoes even more loudly the looks of its ultra-high-performance sister, the IS F, to strengthen its appeal among younger drivers. Meanwhile all IS models equipped with high-intensity discharge (HID) headlights gain LED daytime running lights and across the range there are new wheel designs, new rear light designs and a revised choice of exterior colours.

New IS 200d with enhanced driving quality
Replacing the previous IS 220d, the new IS 200d delivers stronger fuel economy, lower CO2 emissions and a more refined and smoother drive.
The new 148bhp version of the 2.2-litre diesel engine benefits from detailed engineering revisions and is equipped with a diesel particulate filter (DPF) to meet Euro 5 emissions standards and enhance the engine’s driving quality.

The changes include a re-shaped combustion chamber and the use of new-generation piezoelectric fuel injectors to give a more efficient, cleaner and complete fuel burn. Pressure in the common rail injection system has been increased. a higher flow exhaust gas recirculation valve has been introduced and the adoption of a new oil-cooled, variable nozzle turbocharger improves torque performance at low speeds and cuts overall engine noise.

As well as saving money at the pumps, owners enjoy a lower annual road tax
charge – Band E rather than F for Vehicle Excise Duty. For company car tax payers there is a further bonus in the reduction of the Benefit-in-Kind tax rating from 21 to 18 per cent for the new model.

IS 250 automatic and IS 250C
For the 2011 model year the IS 250 becomes and automatic-only model, with revisions to the powertrain that ensure compliance with Euro 5 emissions standards.

Power and torque are unchanged from the super-smooth V6 are unchanged at 205bhp and 252Nm, but combined cycle fuel consumption improves from 31.7 to 33.6mpg, with a concurrent fall in CO2 output from 209 to 194g/km. As a result the model’s BiK tax rating is cut from 30 to 27 per cent.

Similarly, the improved engine is also under the bonnet of the 2011 IS 250C coupe-cabriolet, with an improvement in combined cycle performance to 30.7mpg and a 6g/km reduction in CO2 emissions to 213g/km.

Revised IS F-Sport
Changes to the IS 250 and 220d F-Sport models’ exterior and interior make them even more of a stand-out choice, heavily influenced by the styling of the ultra-high-performance IS F.

Inside the sports factor continues with F-Sport steering wheel, gear lever and sports pedals and front seats finished in leather and Alcantara. Extra touches of titanium-effect trim and a dark, anthracite roof liner are also introduced.
New specifications and options
Revisions elsewhere in the IS range included improvements to the SE-I specification to introduce rain-sensing wipers, an auto-dimming electrochromic rear view mirror and a new leather upholstery with heated front seats. There is a modest change to the rear light clusters and on IS 250 the exhaust tailpipe has a bolder circular profile in place of the previous ellipse.

New-look 17 and 18-inch wheels are available and the choice of exterior colours has been adjusted, with Ultra Blue metallic making its debut in the range.

Very nice aha not really, but still
Despite using a revised version of the current 2.2ltr diesel donk, why is the updated model called an IS200d instead of the current designation IS220d ... mmm !!
They would do that in Europe.
@Shane From Australia: apparently they're that crazy about being green.
I'm loving the F sport...that grille, that color...my God I'm so blessed to know that's going to be my first car.
Toyota's diesel always have very low amount of power , that always being compared by idiot Hyundai .
I wonder if the 200d still comes with a manual transmission...
Att : Krew ... Can you please clarify something for me. The article states that Lexus Europe will be selling both the IS200d and the IS220d however my understanding is that both versions use the same 2.2ltr displacement engine. I'm a little confused !!
lexus IS200d in 2011 i am dying to buy it. what is launch date ....
The new IS 200d get 46 mpg (US) combined cycle! Why do we get hybrids? The HS 250 only gets 34 mpg combined, with similar performance. OK, it's a little greener, but not much.
@enthusiast: You're right ! That's why Toyota/Lexus Hybrid Drive is start to confusing people . In Japan , they even cancel the tax-free term for Hybrid . That's also lead Toyota's Hybrid car decrease on bill . I hope Toyota can develop stronger performance Diesel engine to compare with World ! Because Diesel is seriously more efficiency compare with Hybrid on Highway cruising & under some condition .
The old ISd had 175hp i belive.....
http://www.topspeed.com/cars/lexus/2011-lexus-is-f-ar86944.html

Correct. What Lexus is doing in Europe is offering two distinct versions of the 2.2-liter, 4 cyl. diesel: a low-output 150 DIN hp version named IS 200d and a high-output 177 DIN hp version that keeps the IS 220d name. This isn't just a Lexus invention: BMW, Mercedes and, possibly, Audi do this or have done this in the past, namely offering low and high-output versions of a given engine and giving each one a different model number even though one is accurate and one isn't. Each country has its own vehicle taxation rules and importance given not only to fuel economy but CO2 emissions, and the UK decided to offer ONLY the lower-powered IS 200d. Germany, on the other hand, is expected to offer both IS 200d and IS 220d. For more detailed information on the IS in Europe: http://my.is/forums/f41/lexus-c-f-2011-europe-418006/
@Stan: From the article: " IS 200d powered by revised 148bhp 2.2-litre diesel engine with diesel particulate filter (DPF), matched to six-speed manual transmission"

LFAaddict wrote:I’m loving the F sport…that grille, that color…my God I’m so blessed to know that’s going to be my first car.

Never gonna happen. But it's probably a nice thought as you ride around on your bike...
In Sweden the IS200d is considered weak.
Driving the NX 450h+