END_OF_DOCUMENT_TOKEN_TO_BE_REPLACED " /> Lexus LFA & Toyota 2000GT Meet in Germany | Lexus Enthusiast
Menu
Log in
Register
You are using an out of date browser. It may not display this or other websites correctly.
You should upgrade or use an alternative browser.

While one white Lexus LFA was doing donuts in Japan, another white LFA made an appearance at the Classic Days Motorfestival in Schloss Dyck, Germany, where it met face to face with its one true predecessor — the Toyota 2000GT.

Auto journalist Richard Meaden did us all a favor and posted a photo to Twitter:

Lexus UK’s Scott Brownlee also posted an image of the LFA posing with yet another 2000GT (there were eight in total at the event): 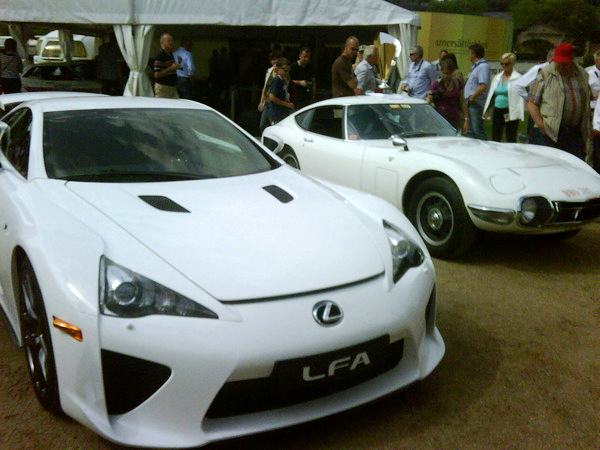 Update: Here’s a video from the event:

Beautiful... I still have the picture of the matte black LFA and white 2000GT playing on my desktop background. Now about the SC...
We should fund this little event for us enthusiasts to meet up with a few Lexus officials and take a look at past vehicles, the current lineup, the exclusive, and the working projects!
Although Toyota 2000GTY is a very old car , but the roof still have the design to help aerodynamic .
HERE'S A TRIVIA! The LFA on a VERY WET Top Gear test track is right on the tail of the Ferrari 599 GTB Fiorano on a DRY Top Gear test track!!!
@WorldofLuxury: LFA would have lapped easily 4 seconds quicker in the dry since Stig was lifting off the throttle a lot to keep the oversteer in check. 1:18.9 would have put it faster than any production supercar so far.

WorldofLuxury wrote:We should fund this little event for us enthusiasts to meet up with a few Lexus officials and take a look at past vehicles, the current lineup, the exclusive, and the working projects!