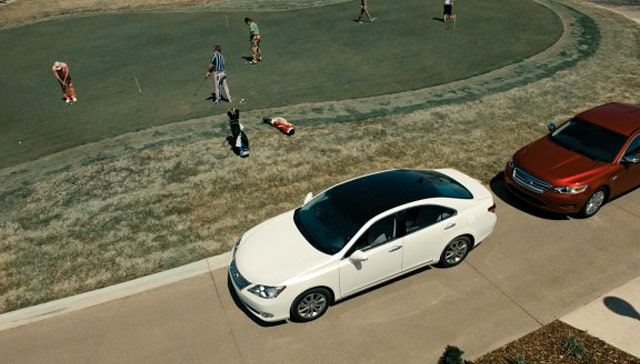 Car & Driver took the Lexus ES 350, Hyundai Genesis, Buick LaCrosse & Ford Taurus Limited out on a golfing trip — here’s what they had to say about the ES 350:

[…]the ES350 is also the lightest car in this group, and good things always happen when you’re slim. For starters, the Lexus, while requiring premium fuel, easily attained the best observed fuel economy. And even though it offers just average horsepower, it was the second-quickest to 60 mph, tied the Genesis for best rolling start to 60 mph, achieved 100 mph the soonest, carried the greatest speed through the quarter-mile, and was the winner in 50-to-70-mph passing potential.

Throttle tip-in is perfect, sightlines are unobstructed (aided by thin A-pillars and a low beltline), and there’s an uncanny rightness about the interface among pedals, steering wheel, shifter, and center stack. Around town, especially, the ES350 felt light, airy, and more agile than its competitors.

Really, this comparison is a hodgepodge and the results are fairly predictable. In the end, the ES 350 placed second behind the Hyundai Genesis — hardly surprising given that the Genesis was released last year to compete against the Lexus GS & BMW 5-series, and car magazines will always prefer the sportier drive.

On the other hand, here’s a comparison that puts the four-year-old ES 350 ahead of two brand-new vehicles — including the LaCrosse which is pointed directly at the ES’ marketshare. In that regard, I’d say the ES 350 put on a good round.

I'm not used to the ES. In an ES loaner, I couldn't find a way to get the A-pillar out of my way. Still, I guess it was just my usual problems in a new car. Glad to hear that it performed well! Lexus gotta bring out the new ES though! And make it better now with another vehicle below it - the CTh.
@WorldofLuxury: i guess they must enhance the HS design too the HS is the worst Lexus designed ever
@Free Spirit I agree with the HS250 comments. The HS250 needs a more aggressive design and a bit more horsepower/torque otherwise we will never see HS's in the future. The sales have dropped off and are way below what is "acceptable" for a Lexus Model Line. Lexus Financial has given it a high residual and STILL leasing hasn't been "taking off" like many have hoped. The MSRP for a Navigation Premium Hybrid is $41,175 which is almost EXACTLY the same as a ES350 w/Navigation and a IS250 AWD with Navigation and Luxury Package. If you had the choice between the three, would you chose the HS250? I wouldn't.
@lexusjoe: I agree, the HS does need more power and a more aggressive design. If the HS was cheaper, it might sell better. Because like you said, you can buy an ES or IS with the same options for the same amount. Who'd buy an HS over the IS or ES? I almost hope that Lexus just phases out the HS altogether and replaces it with an IS Hybrid. I don't think the HS is that bad, but if its not selling very well there's no reason to keep it. An IS Hybrid would also add another car to the IS Line and simplify the entire Lexus line-up a bit. The IS Hybrid would have to be like the GS Hybrid though, a performance luxury hybrid. Something that's actually faster than the non-hybrid version.
About the C&D Comparison, Ford vs Buick vs Hyundai vs Lexus? You've got to be kidding me. I think it might have been better to include the Toyota Avalon rather than the ES350. At least they'd be comparing four cars in the same class.
Surprising 2nd place for the ES considering it's age & it "rides like a Rolls" at a fraction of the price. Too bad lexus didn't add LED taillights along with the facelift. Totally agree with the HS comments. HS & CT are the biggest embarrasment to the Lexus range & really turn me off. I don't bother to even look at any article about those two models posted on this site (sorry Krew!) >:-(
About the HS, I couldn't agree more. I think when most people look at the HS they think gussied up Carolla. In profile they look very similar and have similar dimensions. I couldn't even justify the price difference of the HS to a Camry Hybrid. Considering they both have very similar powertrains, the Camry is larger, can have nearly all of the same features and costs 10k less. IMO the HS interior quality is just marginally better than the Camry. The leather seats and dashboard is nicer, but thats all. Next gen ES needs to be offered the hybrid engine that the next gen Camry hybrid will get.

James wrote:About the C&D Comparison, Ford vs Buick vs Hyundai vs Lexus? You’ve got to be kidding me. I think it might have been better to include the Toyota Avalon rather than the ES350. At least they’d be comparing four cars in the same class.

@James. I agree wholeheartedly. I'm in the market for a new car. When the Lacrosse came out I fell in love with the design. I couldn't wait to see one and check it out. We are a Toyota family. My wife has an '09 Sienna LTD, and my daughter is turning 16 and getting my Camry to drive. My wife and I had pretty much narrowed the choices down to the LaCrosse CSX and the Avalon LTD. We were at the beach a month or so ago without the kids, so we decided to test drive some cars while we were there. We drove the Avalon first and were blown away by the quality, fit and finish and smooth ride. We went directly from the Toyota dealership to the GMC place and drove a LaCrosse. There was absolutely no comparison. The Toyota product was 10 times better than the Government Motors product. The ride, materials, visibility, fit/finish, accessibility of the controls were all better in the Avalon. I'm amazed to see all of the rave reviews about the LaCrosse and how the reviewers are rating it. It can't hold a candle to an Avalon, much less a Lexus ES 350. So which car did I decide on? Lexus ES 350 with the Ultra Luxury/Levinson Stereo Packages. I got such an incredible deal on the last day of the month; even less than an Avalon LTD. So I had to pull the trigger. The LaCrosse is junk; I just wish Toyota built them.