Lexus Europe has teased their Twitter fans with some quick photos of the latest addition to their fleet: a Brown Spice Mica CT 200h: 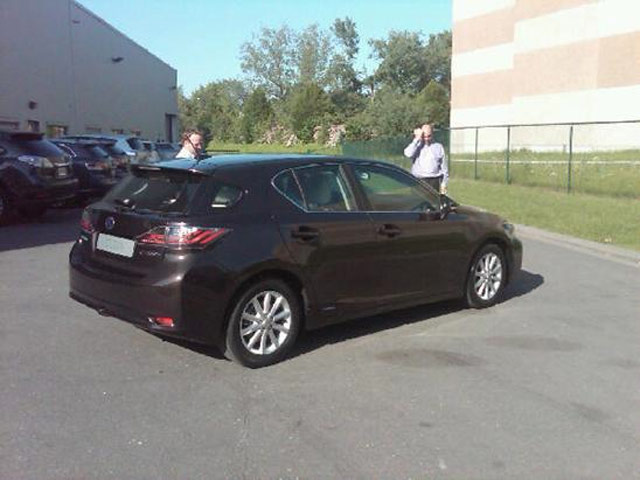 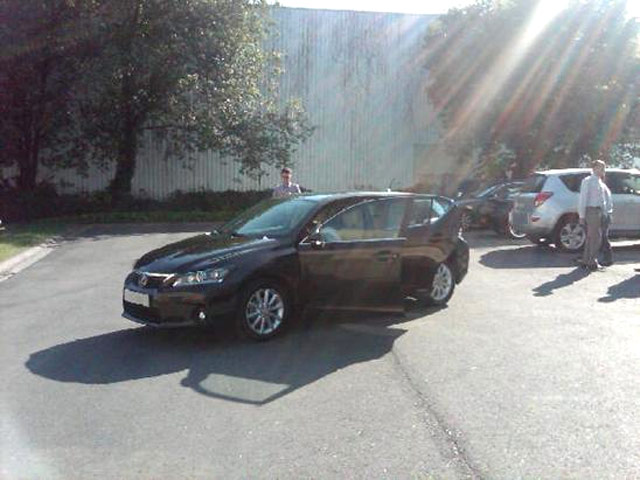 Sure, the photo quality isn’t all that great, but it’s enough to give an idea of what the CT 200h will look like in darker colors. It’s certainly a tidy looking car — can’t wait to the first proper photoshoot to show up.

seal wrote:AMAZING !! Can’t wait to see the black one too !!! Give us more

I think you are the world's biggest CT fan! 8-)
@krew: hahah thanks @krew... and i hope not the only one :P
Cool color with a cool name lol The CTh looks great.
I like that chrome on the grille. Lexus should offer an appearance package that adds a single-piece of LF-Ch-like chrome around the side windows, broken up only between the doors. I thought Lexus had made single-pieced chrome around the side windows their signature until the second generation IS came out aha A nice, sporty, unobstructive chrome bar on top of the rear license plates would be great too. Those wheels... Anyways, I really like the exterior; it looks great, and it looks like a Lexus; but the same thing can't be said about the interior... Has anyone seen this video of the 24 Hours of Nürburgring? The LFA is featured a few times as well as the GAZOO Racing team; there is this awesome part in which the bound-to-win M3 was pulled in as the camera follows an LFA taking off, leaving behind only its music. :-)
LAKERS WON! AND IT'S MY BIRTHDAY! :-D
@WorldofLuxury: Happy birthday, WoL! :-)
gorgeous Amazing Fabulous8-)
Those wheels....are they really 17? At Geneva they looked bigger. If so, we want the 18, right?8-)
@Max from Italy: 17 .. and yes we need 18 :D
Is it me, or does the CT200h look EXACTLY like a Mazda 3 Hatchback with a Lexus emblem on it?
@lexusjoe: shhh! Don't give the auto critics anymore ideas! :-P
Stop saying that it looks like Mazda 3... !! And like @crew says ... the world’s biggest CT fan has to proove it !! So here are some EXCLUSIVE photos of this beauty !!!

Oh and a starting price for Europe too ... : 31.000 euros ;) You can thanks me now :D 8-):-D:-P
@seal: Where did these photos come from? If they're official, I might use one as my new site header. :)
@seal: Thanks man aha I just hate how the designers brag about the design of the interior, but it's all fundamentals that they ramble about.
@krew: yes, they are official shots but i only have these low-analysis samples. You can use the of course ;) The complete photo album in September ;)
please, give us a rear photo! gets the car a rear wiper?
@krew: use the internal still it's external not that growing up for me and other people i think they missed their chance by not using the external of the concept the concept external is much more heaven beauty like that dosen't mean that i hate that external i even love it but just dreamed with the concept external with that internal and a RWD or AWD all with that same price i think if they did that they might have now a win win win win Wild Card
@seal: Seal thanks a lot man about those great shots
@seal: As always, Lexus didn't use the best photos initially to introduce a vehicle! aha These are so much better!
@rudii: wish i could but i am just a fan (ok .. THE FAN :-P ) of CT200h .. i don't work for Lexus! I will try to ask though ! ;) Thank you all guys !!
In Italy: pre-order from Octber. In salons from March 2011.
Those photos looks HORRIBLE and does a bad job as showing off a new car.... SEAL those photos you posted show what a good looker and stand out the CT is....a great design by Lexus and look yeard better then anything else in its class.
http://www.motorbox.com/Auto/Magazine/Prossimamente/lexusct200h_nuovefoto.html?mmc=49 bye
Looks great, I can't wait to get behind the wheel of a CT. My only gripe is from all the pictures I've seen none of the CT's had a sunroof. A sunroof is an absolute must for my next car. Every non convertible Lexus (including the HS) offers a sunroof, I hope the CT is as well.
Btw I haven't posted in a while. Krew, the site looks fantastic!

Jay wrote:My only gripe is from all the pictures I’ve seen none of the CT’s had a sunroof. A sunroof is an absolute must for my next car. Every non convertible Lexus (including the HS) offers a sunroof, I hope the CT is as well.

I think a sunroof is a safe bet for the production model -- and thanks for the compliment about the site! 8-)
some better pictures from europe greetings from holland, im gonna drive one in march 2011 8-)8-)
and now with the link some better picuters