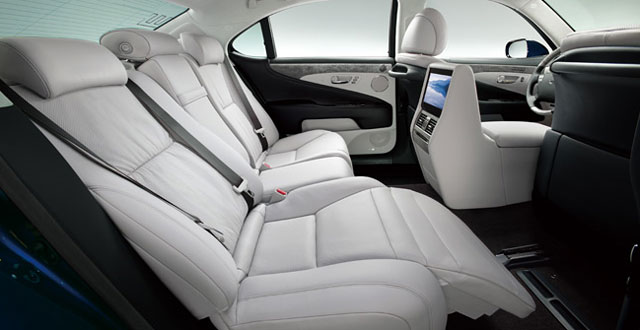 Alexandra Straub of AutoTrader.ca recently took the 2010 Lexus LS 600h L for a test drive, and found herself indulging in the vehicle’s 5-seat Executive package rear seat.  This configuration is new for the revised LS range, being added alongside the original 4-seat Executive package. In addition to the extra center seat, the DVD rear-seat entertainment system has been relocated from its ceiling mount in the 4-seat version to a fixed center console position.  While noting that she had to be careful to avoid elbowing the monitor during entry, Straub lauded the vehicle’s navigation system, backup camera, turning circle, and fuel economy.  Moreover she found herself being chauffeured…by choice:

Where I had the most fun, though, was in the back seat. I’m not talking about ‘that’ kind of fun either! While I was parked outside waiting for my husband, I decided to hop in back where my sister-in-law was already sitting. There I had the Friday night of my life.

Where else can I get to sit in the back of the most expensive hybrid Lexus makes and enjoy a vibrating shiatsu massage with my feet perched comfortably on a retractable ottoman? Massage and ottoman features are only available on the right side (passenger side) of the LS 600h L, the side I was seated on so I literally was in the lap of luxury. Too bad we forgot to bring a DVD because the Premium Executive Package that includes these items also adds a DVD entertainment system with satellite TV. And when we wanted some privacy to people watch, all it took was a push of a button for the power rear window sunshades to pop up.

Gosh, I could live in the back of this vehicle. All it needs is a fridge and a shower. I think we sat there for over an hour and I’m pretty sure this is one of the few instances when I told David to take his time; I was in no rush. Astonished by this, he said to me, “This car must have magic woven into its fibers.” I concur and expand: the rear seat has magic fingers.

One of the advancements of the current LS Is the addition of full-fledged long wheelbase comfort, and the new model shows yet more options in that regard.  Satellite TV is better than flying most airlines too. (Note: JDM LS model trim colors shown).