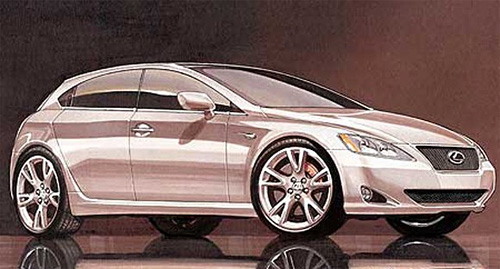 Autocar is reporting that Lexus will be debuting a five-door compact hatchback concept at this year’s Frankfurt Auto Show:

Company insiders suggest that the car was signed off late last year, largely at the behest of European execs who insisted that the Europe’s premium C-segment was an area of the market “too lucrative not to be in”.

As such, the new compact Lexus is likely to use the same powertrain as the US-market-only HS250h – a 2.4-litre four-cylinder engine that, with the help of an electric motor, produces 187bhp.

Like the HS it’ll also be front-wheel drive, but it won’t use the same platform as the bigger HS.

“The Frankfurt concept is called C-Premium,” our source advised. It’s a 90 per cent match for the real thing, which we’ll see at Geneva next year. It should be on sale in the UK by Autumn 2010.”

What’s more, members of My.IS did some research and found that Lexus has registered CT200h, CT300h & CT400h in the USA and CT200h in Canada, which suggests that the compact hatchback could be making its way over to North America as well.

The name itself is full of details—CT is likely to stand for Compact Touring or Compact Tourer. The 200h & 300h suggests the hatchback could share engines with the new Prius and the HS 250h, with 400h being a top-of-the-line V6 hybrid.

While so much will depend on the styling, there’s no question that this model will be key in increasing Lexus’ presence in Europe, where hatchbacks reign supreme. No doubt this is the central reason the model will be introduced in Frankfurt.

Just imagine—a new Lexus hatchback in September followed by the production LFA at October’s Tokyo Auto Show, along with the LS-Sport & next generation GX debuting somewhere along the way as well. Exciting times for Lexus fans!

(Note: The above image is a few years old, and is no real indication of what the compact hatchback may look like.)